Tinder meet-up turns into an armed robbery at Phoenix hotel

Two suspects have a date with a judge after a Tinder meet-up turned into an armed robbery at a Phoenix hotel.

PHOENIX - Police say after several days on the run, two suspects involved in Tinder meet-up that turned into an armed robbery have been arrested.

It all started on Sept. 19 when Phoenix Police officers responded to report about an armed robbery near 43rd Avenue and Beardsley Road. When they arrived at the scene, they learned the victim met a woman by the name of "Sonya" on the online dating app, Tinder.

The victim told officers he agreed to meet Sonya at the Embassy Suites hotel near Camelback Road and 26th Street in Phoenix on Sept. 17. When he entered the hotel, he was directed to the woman's room. Inside, greeted by two suspects.

According to the police report, the male suspect withdrew a gray handgun, pointed it at the victim and demanded his property. The victim gave the suspect his belongings, including a cell phone, identification cards, social media accounts, PIN codes, and his bank account information.

Police say the suspects then told the victim to drive them to a Chase Bank location near the hotel.

"While they drove his car to the bank, the unknown male continued to have the gun out and provide instructions for the victim," police mentioned in their report. "The victim stated $900 was taken from Chase Bank on Sept. 17 from the drive through and a total of $3,000 had been taken from his account since the initial incident."

Five days later, Crystal Hulsey, 33, and Jose Sandoval Jaquez, 32, were identified as the suspects. The victim was able to provide bank statements that showed Zelle and Cash App withdrawals from his account containing partial usernames. Investigators found the usernames matched profiles belonging to the suspects.

By Sept. 25, the victim's vehicle was found by the Las Vegas Police Department. Inside the vehicle was a gray handgun. Later that week, an advertisement for an escort was found online with Hulsey's phone number. Phoenix Police officers inquired about the ad and set up a location to meet the woman. While waiting for her, police identified Hulsey in a Nissan Rogue at a La Quinta Inn near Interstate 17 and Thomas Road. Police say Jaquez was driving the SUV.

While attempting to apprehend the suspects, police say Hulsey and Jaquez fled the scene at a high rate of speed and were seen driving on the wrong side of the road. Then they traveled westbound on the eastbound lanes of Jefferson Road, approaching 27th Avenue.

The suspects headed to the East Valley, driving to Tempe, Mesa, Gilbert, and back to Mesa. Then they headed north to Payson and Happy Jack, where police say the suspects drove on the wrong side of the highway and collided with another vehicle. They attempted to carjack another vehicle, but by that time, a "Department of Public Safety helicopter landed and took the suspects into custody in Happy Jack."

During an interview, Jaquez admitted to grabbing a man out of a car and said his girlfriend came with him. In the police report, Jaquez stated that they drove all over the Valley and ended up in the woods. He tried to steal another car but got arrested. He identified himself in photos at the Embassy Suites.

"Jose stated he knew this would come back to get him," said police. 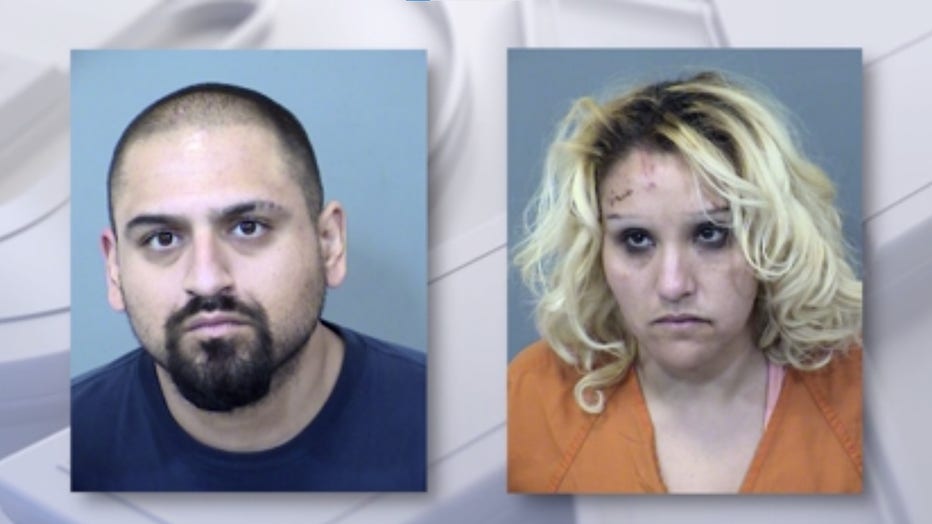