President-elect Joe Biden introduced Miguel Cardona as his pick for education secretary on Wednesday, saying Connecticut's education chief and life-long champion of public schools is the right pick to lead.

WASHINGTON - A year after the Supreme Court ruled that protections in the Civil Rights Act against discrimination in the workplace extended to gay and transgender people, the U.S. Department of Education issued a notice of interpretation Wednesday explaining that it will enforce Title IX’s discrimination prohibitions to protect students.

The Department of Education’s Office for Civil Rights explained that it will enforce Title IX’s prohibition on discrimination on the basis of sex to include discrimination based on sexual orientation and gender identity.

"The Supreme Court has upheld the right for LGBTQ+ people to live and work without fear of harassment, exclusion, and discrimination – and our LGBTQ+ students have the same rights and deserve the same protections. I’m proud to have directed the Office for Civil Rights to enforce Title IX to protect all students from all forms of sex discrimination," said U.S. Secretary of Education Miguel Cardona. "Today, the Department makes clear that all students—including LGBTQ+ students—deserve the opportunity to learn and thrive in schools that are free from discrimination." 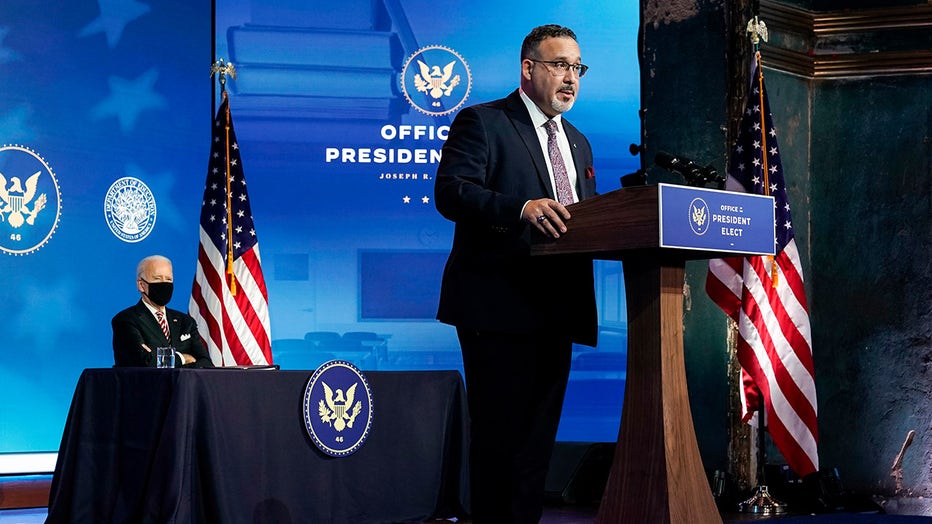 Miguel Cardona speaks after President-Elect Joe Biden announced him as his nominee for Education Secretary at the Queen theatre on December 23, 2020 in Wilmington, Delaware. Cardona, the Connecticut Education Commissioner, will face the urgent task o

"@USEdGov is committed to making sure LGBTQ+ students are protected against discrimination in every educational setting under Title IX," Miguel Cardona, the secretary of education, wrote on Twitter Wednesday.

According to the department, this interpretation stems from the landmark U.S. Supreme Court decision in Bostock v. Clayton County, issued one year ago this week, that protects gay and transgender workers from workplace discrimination.

"An employer who fires an individual merely for being gay or transgender defies the law," Justice Neil M. Gorsuch wrote for the majority in the 6-to-3 ruling.

This announcement comes after the Department of Education Office for Civil Rights recently reported that LGBTQ+ students often face additional challenges in schools, including disproportionately impacted by bullying, harassment and victimization — exacerbated during the COVID-19 pandemic.

"The vulnerability of LGBTQ+ students has only increased during the COVID-19 pandemic, leaving them without access to school-based mental health services and other supports. One survey found that 78 percent of transgender and nonbinary youth reported that their mental health was ‘poor’ either most of the time or always during COVID-19, compared with 61 percent of cisgender youth," the department wrote in the press release published Wednesday.

The department said the interpretation is an example of the office’s effort to promote safe and inclusive schools for all students and is part of the Biden administration’s commitment to advance the rights of the LGBTQ+ community.

"The Department of Education strives to provide schools with the support they need to create learning environments that enable all students to succeed, regardless of their gender identity or sexual orientation. Equity in education means all students have access to schools that allow them to learn and thrive in all aspects of their educational experience," said Acting Assistant Secretary for Civil Rights Suzanne B. Goldberg. "As part of our mission to protect all students’ civil rights, it is essential that OCR acts to eliminate discrimination that targets LGBTQ+ students."

In March, Biden signed an executive order guaranteeing an educational environment free from discrimination on the basis of sex.