Protest continues in Tokyo as the Olympic opening ceremony begins.

TOKYO - The 2020 Toyko Olympics finally opened on Friday after a year-long delay due to the pandemic with opposition due to a rise in COVID-19 cases and a very different feel than originally intended.

The opening ceremony, which was held in Tokyo's largely empty Olympic Stadium, kicked off with made-for-TV choreography and fireworks. Spectators are banned from all venues in the Tokyo area, where the coronavirus is surging and infections have climbed to a six-month high.

Masked athletes from more than 200 countries marched into the stadium in their usual parade of nations, some socially distanced, others clustering together in excitement during the subdued ceremony.

"Today is a moment of hope. Yes, it is very different from what all of us had imagined," IOC President Thomas Bach said. "But let us cherish this moment because finally, we are all here together."

"This feeling of togetherness — this is the light at the end of the dark tunnel of the pandemic," Bach declared. Later, Japanese tennis star Naomi Osaka received the Olympic flame from a torch relay through the stadium and lit the Olympic cauldron.

Meanwhile, others gathered near the stadium in protest of the Games, some holding signs and chanting "no to the Olympics" and "save people’s lives." 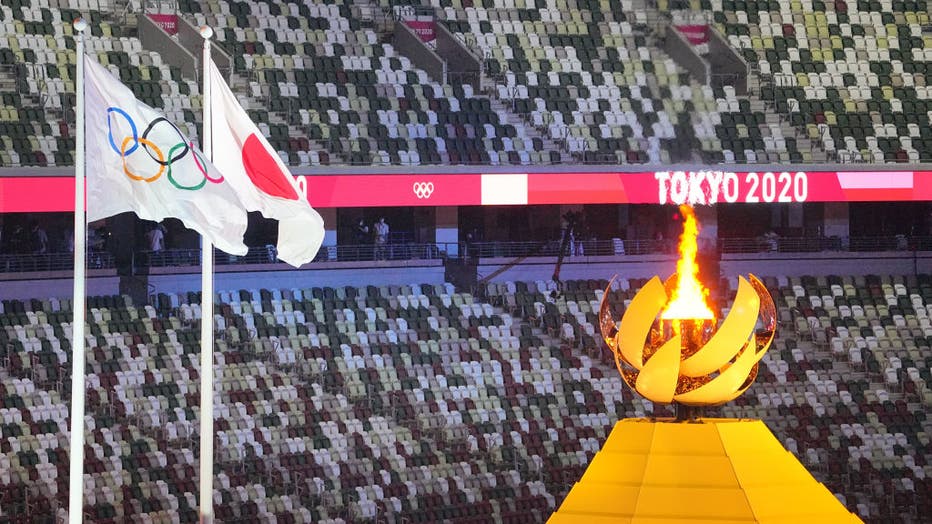 Opening ceremony in the Olympic Stadium. The Olympic fire burns next to it the Olympic and Japanese flags on July 23, 2021, in Tokyo, Japan. (Photo by Michael Kappeler/picture alliance via Getty Images) 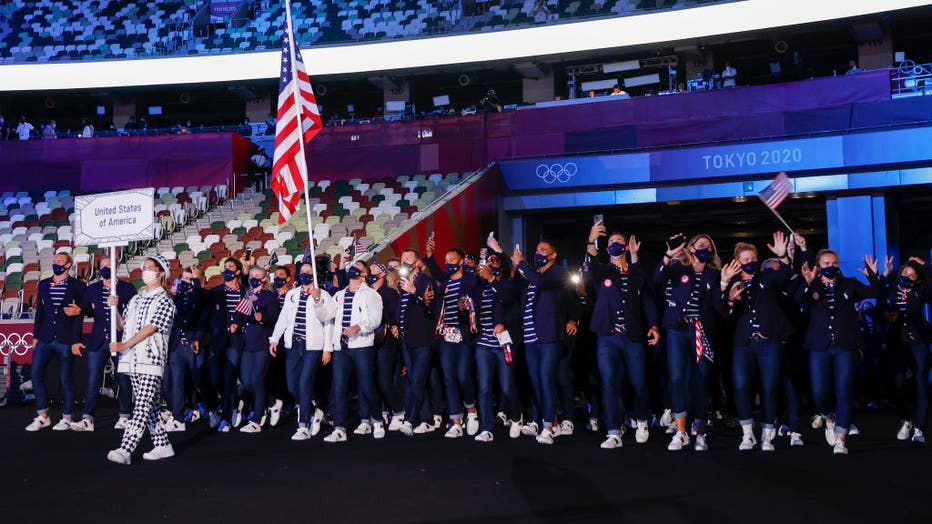 The Tokyo Olympics was originally scheduled to begin 364 days ago but was postponed due to the global pandemic. The organizing committee and the Japanese government have faced criticism for continuing with the Games despite a state of emergency having been declared in Tokyo in recent weeks.

Tokyo reported 1,979 new cases on Thursday, which was the highest figure since 2,044 were recorded on Jan. 15. Prime Minister Yoshihide Suga, who is determined to hold the Olympics, placed Tokyo under the state of emergency on July 12, but daily cases have sharply increased since then.

The emergency measures, which largely involve a ban on alcohol sales and shorter hours for restaurants and bars, are to last until Aug. 22, after the Olympics end on Aug. 8.

Japan has reported about 853,000 cases and 15,100 deaths since the pandemic began, most of them this year. Still, the number of cases and deaths as a share of the population is much lower than in many other countries.

Suga’s government has been criticized for what some say is prioritizing the Olympics over the nation’s health. His public support ratings have fallen to around 30% in recent media surveys, and there has been little festivity ahead of the Games. On Thursday, the opening ceremony director, Kentaro Kobayashi, was also dismissed over a past Holocaust joke. 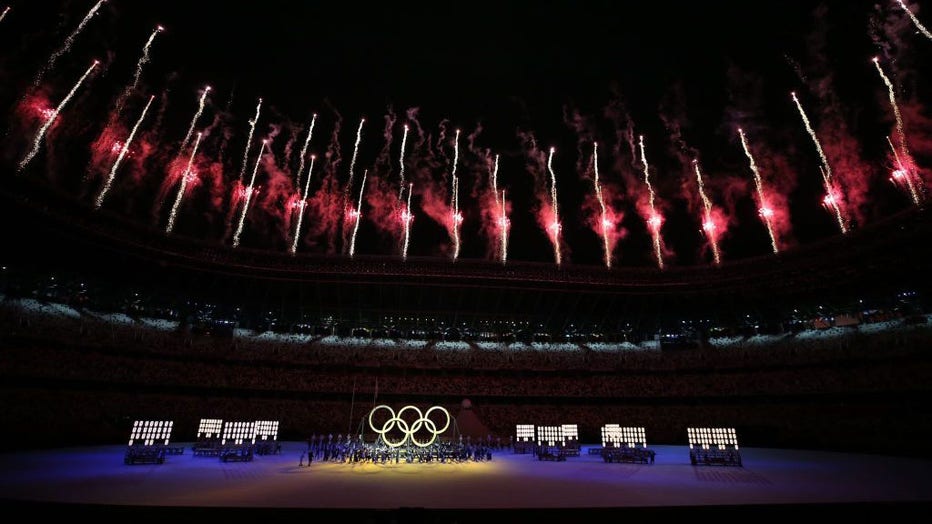 TOKYO, JAPAN - JULY 23: Artists perform as fireworks explode above the stadium during the opening ceremony of the Tokyo 2020 Olympic Games at the Olympic Stadium in Tokyo, Japan on July 23, 2021. (Photo by Ali Atmaca/Anadolu Agency via Getty Images) 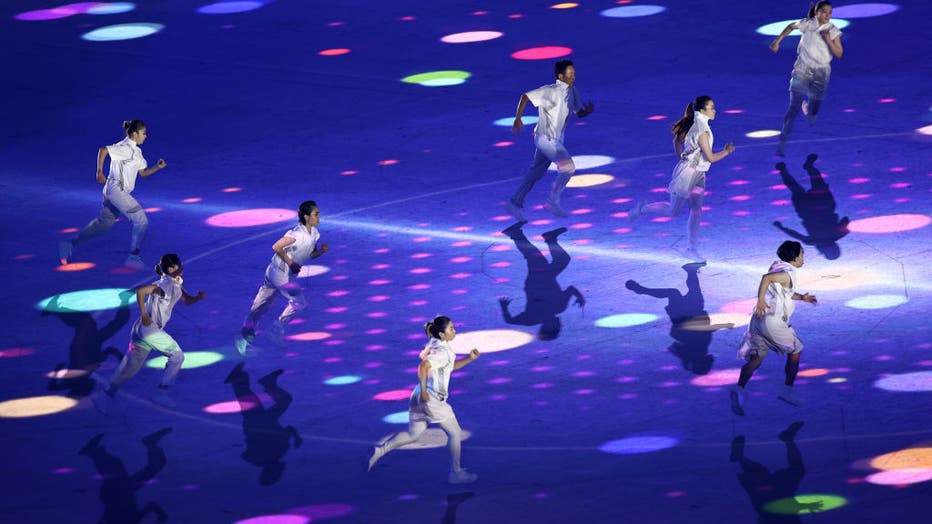 The U.S. Olympic and Paralympic Committee Medical Director Jonathan Finnoff said early Friday about 100 of the 613 U.S. athletes descending on Tokyo are unvaccinated. Finnoff said 567 of the American athletes filled out their health histories as they prepared for the trip, and an estimated 83% had replied they were vaccinated.

"Eighty-three percent is actually a substantial number and we're quite happy with it," Finnoff said.

According to the Centers for Disease Control and Prevention, nationally, 56.3% of Americans have received at least one dose of the vaccine.

So far, two American athletes — beach volleyball player Taylor Crabb and Kara Eaker, an alternate on the gymnastics team — are known to have tested positive. The IOC has reported 13 positives among all athletes in Japan.

Dr. Jill Biden is leading a U.S. delegation to the Games, embarking on her first solo international trip as the first lady.

She arrived in Tokyo on Thursday, having dinner with Suga and his wife, Mariko Suga, at Akasaka Palace. She attended the opening ceremony and is leading a slimmed-down delegation of two that also includes Raymond Greene, who is overseeing affairs at the U.S. Embassy in Tokyo in the absence of an ambassador.

On Saturday, the first lady will dedicate a room in the residence of the U.S. chief of mission to former U.S. Sen. Daniel Inouye, D-Hawaii, and his wife, Irene Hirano Inouye. The senator died in 2012, and his wife died last year.

She will also host a U.S.-vs.-Mexico softball watch party at the U.S. Embassy for staff and their families and cheer U.S. athletes competing in several events before leaving Tokyo.