TOKYO - The greatest gymnast of all time must rally Team USA for the Americans to win their third consecutive gold medal.

Katie Ledecky and Caeleb Dressel return to the pool and the U.S. women’s soccer team plays its final match in group stage play in Day 4 of coverage of the Tokyo Olympics. 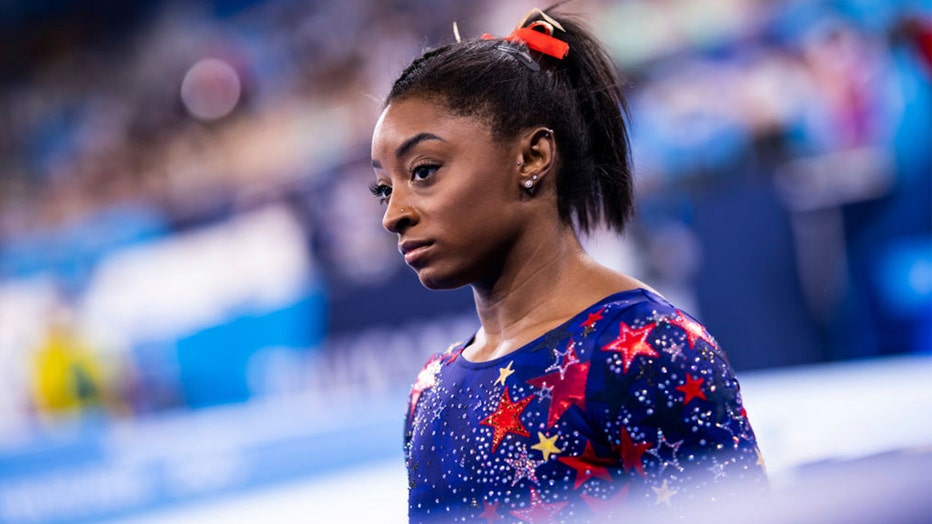 FILE - Simone Biles , compete on day two during the qualification of the women in gymnastics at the Olympic Games at Ariake Gymnastics Centre on July 25, 2021 in Tokyo, Japan.

Here are some things to watch. (all times Eastern):

Simone Biles had a rare off day — off for her — in qualifications and the Americans head into the women's final trailing the team representing the Russian Olympic Committee.

The U.S. has three gymnasts making their Olympic debuts in Suni Lee, Grace McCallum and Jordan Chiles, and the trio all had significant form breaks as the Americans fell behind. But so did Biles, who despite putting up the top score was not at her best.

Biles bounded off the mat at the end of a tumbling pass on floor and her block on her Cheng vault was crooked.

Each member of the four-person team competed in each event during qualifications with the lowest score dropped.

For the finals, the competition moves to three-up/three-count and the Americans have thrived in that format for more than a decade. Biles is scheduled to compete in all five events with coverage live at 6:45 a.m. on Peacock with an encore during primetime on NBC.

Caeleb Dressel, who already has one gold medal in these Games, is expected to compete alongside Rio Olympic gold medalist Townley Haas and first-time Olympian Kieran Smith in the men's 4x200 meter freestyle relay.

Zach Harting and Gunnar Bentz are both expected to contend for Team USA in the men's 200-meter butterfly. Five races are up for medals during NBC's primetime coverage, with the first final set to begin at 9:40 p.m.

The U.S. women's soccer team can advance to the quarterfinals with either a win or a draw over Australia.

The Americans lost their opening game to Sweden but bounced back for a 6-1 victory over New Zealand. The game is the final match in group stage play and will air live at 4 a.m. on USA Network, with two encores to follow on the same channel.

The U.S. women's softball team will play Japan for the gold medal in a rematch of the 2008 final, the previous time softball was an Olympic sport.

Monica Abbott pitched a perfect seventh in relief to advance the Americans into the gold medal game and earned her third win of the tournament. Abbott is likely to start against Japan, a game played the day before her 36th birthday. The game will be live at 7 a.m. on NBC Sports Network with a replay in primetime.

The much-maligned U.S. men's basketball team seeks its first win of the Olympics when it plays Iran in Group A play.

The U.S. men have only two games left in group play at the Tokyo Olympics to solve its woes. An opening 83-76 loss to France snapped a 25-game Olympic winning streak.

The Americans lost for only the sixth time in 144 games at the Olympics all-time, and fell to 53-4 in the Olympics with NBA players on the roster. The 2004 team at the Athens Games lost the other three, and won bronze. The game will be streamed on Peacock at 12:40 a.m.

RELATED: German gymnastics team wears unitards to push back on 'sexualization' of sport

There's a full slate of competition scheduled Tuesday but a typhoon is scheduled to hit the Tokyo area and could disrupt much of the action.

Archery, rowing and sailing have already had schedule revisions, and all tennis not played on center court could potentially be washed out. Center court has a retractable roof.

The third round of men's singles, the quarterfinals for women's singles and doubles, semifinals of men's doubles and first round of mixed doubles are all scheduled to begin at 10 p.m. on The Olympic Channel.

FOR THE LATE CROWD

The U.S. women's water polo team continues its quest for a third consecutive gold medal in a match against Hungary, while the women's cycling team trials both air on NBC in coverage that begins at 12:35 a.m.