FLAGSTAFF, Ariz. (AP) -  As the coronavirus ripped through the Navajo Nation, it spotlighted longstanding inequities on the reservation where thousands of tribal members travel long distances for medical care, internet service is spotty at best and many homes lack electricity and even running water.

Now, the tribe, facing severe issues and fractured priorities, must decide how to spend more than $714 million in federal virus relief money. And they must do it quickly to meet a deadline that also requires state and local governments to spend the money on emergency needs.

The task is daunting on the 27,000-square-mile reservation that stretches across northeastern Arizona and into New Mexico and Utah. Delivering drinking water, building adequate housing and getting residents online would take more money than the government made available and more time than allotted.

“It’s going to come down to what projects will meet the timelines,” Navajo Nation Council Delegate Amber Kanazbah Crotty said. “It’s not going to be what we would want to spend every dime on, just what we can get on the ground to expend by Dec. 30.” 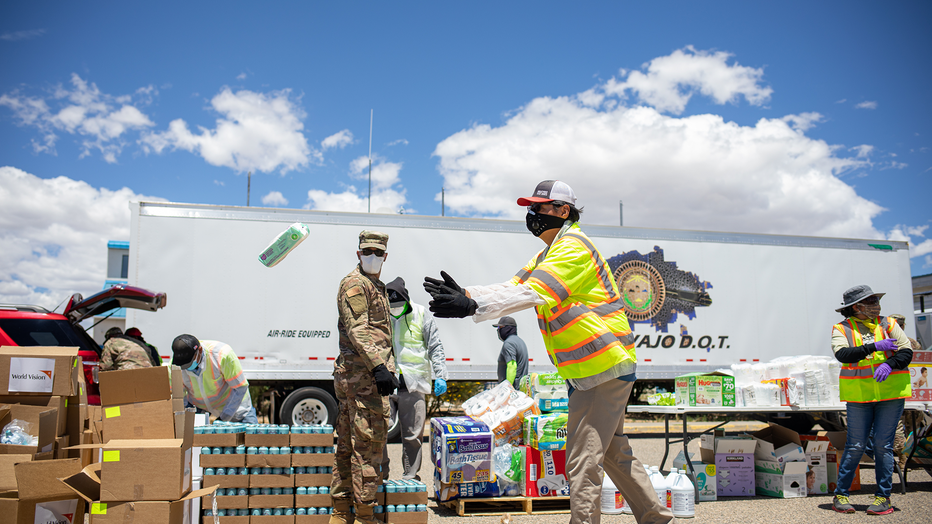 The dilemma on the Navajo Nation isn’t unique in Indian Country. Tribes are wrestling with competing needs, restrictive laws and inadequate staffing to deal with the financial windfalls on a tight deadline amid the debilitating pandemic. They must meet strict federal guidelines on the spending or risk having to send the money back.

Congress approved $8 billion for tribes in March under the Coronavirus Aid, Relief and Economic Security Act. The money was supposed to go out within 30 days. But the payments to tribes were delayed as the Treasury Department grappled with how to dole out the funding, and some tribal nations sued the federal agency over which entities are eligible for a share.

The Navajo Nation, one of the country’s largest tribes, so far has signed off on about $60 million in spending on front-line workers against the virus, protective equipment, disinfecting of buildings, care packages and health care. Tribal President Jonathan Nez last week vetoed more than $70 million in other proposed spending, including $1 million for a group of traditional practitioners, exposing the rifts between branches of tribal government that have delayed putting more of the money to use.

The Navajo Nation is under another weekend curfew as the Native American community battles the ongoing COVID-19 pandemic.

Choosing how it’s spent, selecting contractors and processing the payments will be a huge undertaking, even for the Navajo Nation that’s more robustly staffed than most in Indian Country. Navajo Controller Pearline Kirk said her office already processes nearly $40 million in monthly payments made by the tribe and will have to hire extra help to handle the virus relief funding and compliance.

Kanazbah Crotty said tribal officials also must consider how they can speed up projects by waiving Navajo laws and taking other actions.

The tribe is juggling multiple proposals with price tags that exceed the amount of money available. Among them are water systems, broadband access, power lines, housing and economic development that are meant to address the current pandemic and plan for any future outbreaks.

“It’s a lot and our people don’t want to hear any excuses,” Kanazbah Crotty said.

Under the Treasury Department guidelines, the money can’t be spent on items already budgeted, back-filling lost revenue or per-capita payments. Tribes nationwide are lobbying their congressional delegation to extend the spending deadline and allow for more flexibility.

Eric Henson, an adjunct lecturer in public policy at Harvard University, said tribes should have greater leeway, considering no one knows how long the virus will stick around or whether tribes will have to pivot on reopening businesses.

The White Mountain Apache Tribe is taking some of the most drastic actions in Arizona to protect its 13,500 residents, more than one-eighth of whom have already tested positive for COVID-19.

“Those things don’t pay attention to the timeline at all,” said Henson, a member of the Chickasaw Nation. “It seems like in this case, it’s pretty arbitrary.”

Councilman Michael Langley of the Confederated Tribes of Grand Ronde in Oregon said the pandemic and the tribal budget are inseparable. The tribe has continued paying the wages of its casino employees, and it provides law enforcement services outside its reservation, he said.

Unlike states and local governments, tribes have no tax base and rely on tribal enterprises to generate revenue.

“To have this parenting thing where ‘we can’t trust you with your money’ is somewhat insulting,” Langley said of the federal restrictions.

The tribe is focusing its virus relief funding on supplementing its budget, supporting housing and social service programs, and direct financial support for adult tribal members who have a documented need related to coronavirus.

The Osage Nation in Oklahoma received nearly $45 million and will direct some of it to ensuring a food supply by investing in a meat-packing plant, farms and ranches. Tribal members have few nearby options to buy food, and meat prices have soared amid the pandemic, tribal officials said.

More than $10 million will go to $500 payments to adult tribal members who can document a virus-related need.

“The core of what we believe is to take care of our elders and our children,” said Addie Roanhorse, who works in communications for the tribe. “So anything in relation to that, be it education, health care and making sure that families that couldn’t leave and didn’t have means to get groceries or to the doctor, to help them as well.”

Another federal relief package in the works includes $20 billion for tribes and language to amend the CARES Act to include more flexibility in spending. It has passed the House but hasn’t been taken up in the Senate.

Some tribes argued in federal court that they were shortchanged when the Treasury Department relied on federal population data for some of the CARES Act funding.

For example, the data showed the Shawnee Tribe of Oklahoma has zero members and it received the minimum $100,000 in relief money. The tribe said its actual population is more than 3,000.

A federal judge ruled against a Kansas tribe in a similar case, saying the Treasury Department has discretion in how it distributes the funding. The ruling has been appealed.

Attorneys for the corporations, known as ANCs, have said the money could be used for housing and medical facilities, lighting at an airstrip where supplies are delivered for remote communities, and for storing food and protective equipment.

“Every day the disbursement of CARES Act funds allocated for ANCs is delayed is another day that the Alaska Natives they serve are not fully equipped with the tools to combat the public health emergency,” they wrote in court documents.