WASHINGTON - The House voted Tuesday to hold former White House chief of staff Mark Meadows in contempt of Congress after he ceased to cooperate with the Jan. 6 Committee investigating the Capitol insurrection — making it the first time the House has voted to hold a former member in contempt since the 1830s.

The near-party-line 222-208 vote is the second time the special committee has sought to punish a witness for defying a subpoena. The vote is the latest show of force by the Jan. 6 panel, which is leaving no angle unexplored — and no subpoena unanswered — as it investigates the worst attack on the Capitol in more than 200 years. Lawmakers on the panel are determined to get answers quickly, and in doing so reassert the congressional authority that eroded while former President Donald Trump was in office.

Rep. Jamie Raskin, D-Md., another member of the panel, began Tuesday’s debate on the resolution by reading frantic texts from the day of the attack revealing members of Congress, Fox News anchors and even Trump’s son urging Meadows to persuade the outgoing president to act quickly to stop the three-hour assault by his supporters. 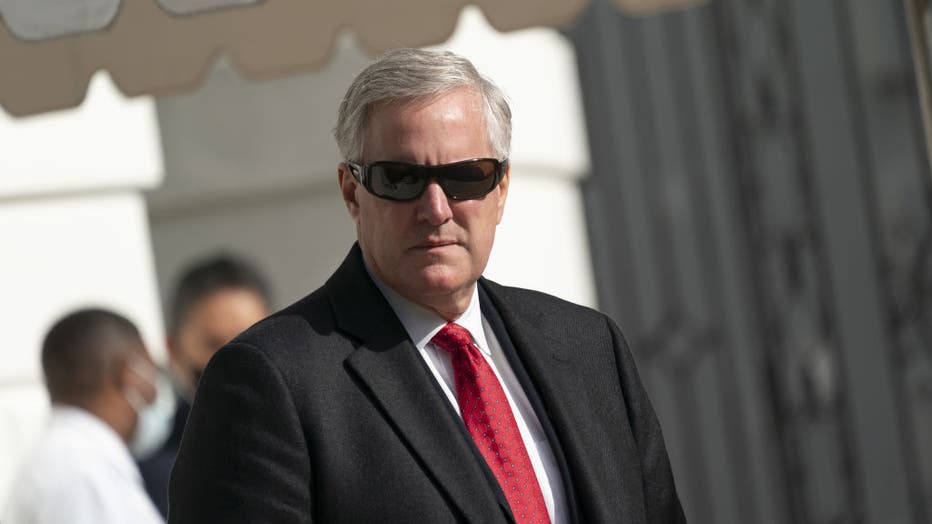 Mark Meadows, White House chief of staff, listens as U.S. President Donald Trump, not pictured, speaks to members of the media before boarding Marine One on the South Lawn of the White House in Washington, D.C., U.S., on Friday, Oct. 30, 2020. Trump

The House vote sends the matter to the U.S. attorney’s office in Washington, where it will now be up to prosecutors in that office to decide whether to present the case to a grand jury for possible criminal charges.

If convicted, Bannon and Meadows could each face up to one year behind bars on each charge.

The nine-member panel voted 9-0 Monday night to recommend charges against the former North Carolina congressman who left in March 2020 to become Trump's chief of staff.

Republicans on Tuesday called the action against Meadows a distraction from the House's work, with one member calling it "evil" and "un-American."

Rep. Jim Jordan of Ohio, took to the floor to praise Meadows: "Make no mistake, when Democrats vote in favor of this resolution, it is a vote to put a good man in prison."

Trump has also defended Meadows in an interview, saying: "I think Mark should do what’s right. He’s an honorable man. He shouldn’t be put through this."

And Meadows’ attorney George Terwilliger defended his client in a statement before the vote, noting that he had provided documents to the panel and maintaining that he should not be compelled to appear for an interview.

Terwilliger said, "The Select Committee’s true intentions in dealing with Mr. Meadows have been revealed when it accuses him of contempt citing the very documents his cooperation has produced."

Meadows himself has sued the panel, asking a court to invalidate two subpoenas that he says are "overly broad and unduly burdensome."

Meanwhile, Senate Republican leader Mitch McConnell told reporters: "I do think we’re all watching, as you are, what is unfolding on the House side. And it will be interesting to reveal all the participants who were involved."

The committee investigating the U.S. Capitol riot said it will refer to the U.S. House that Trump-ally Steve Bannon be held in contempt for defying a subpoena related to the investigation.

He added that he was not in contact with Meadows on the day of the attack.

Democrats quoted at length from Jan. 6 text messages provided by Meadows while he was cooperating with the committee.

"We need an Oval Office address," Donald Trump Jr. texted, the committee said, as his father's supporters were breaking into the Capitol, sending lawmakers running for their lives and interrupting the certification of Joe Biden's presidential victory. "He has to lead now. It has gone too far and gotten out of hand."

Trump Jr. added, "He’s got to condemn this s—- ASAP." In response to one of Trump Jr.'s texts, Meadows said: "I’m pushing it hard. I agree."

Members of the committee said the texts raise fresh questions about what was happening at the White House — and what Trump himself was doing — as the attack was underway. The committee had planned to question Meadows about the communications, including 6,600 pages of records taken from personal email accounts and about 2,000 text messages. The panel has not released any of the communications in full.

Republican Rep. Liz Cheney of Wyoming, the panel’s vice chairwoman, said at the committee's Monday evening meeting that an important issue raised by the texts is whether Trump sought to obstruct the congressional certification by refusing to send a strong message to the rioters to stop.

"These texts leave no doubt," Cheney said. "The White House knew exactly what was happening at the Capitol."

The investigating panel has already interviewed more than 300 witnesses, and subpoenaed more than 40 people, as it seeks to create the most comprehensive record yet of the lead-up to the insurrection and of the violent siege itself.

If Meadows had appeared for his deposition, lawmakers had planned to ask him about Trump’s efforts to overturn the election in the weeks before the insurrection, including his outreach to states and his communications with members of Congress.

The panel says it wanted to know more about whether Trump was engaged in discussions regarding the response of the National Guard, which was delayed for hours as the violence escalated and the rioters beat police guarding the Capitol building.

The documents provided by Meadows include an email he sent to an unidentified person saying that the Guard would be present to "protect pro Trump people," the panel said, and that more would be available on standby. The committee did not release any additional details about that email.

Committee staff said they would have interviewed Meadows about emails "to leadership at the Department of Justice on December 29th and 30th, 2020, and January 1st, 2021, encouraging investigations of suspected voter fraud," even though election officials and courts across the country had rejected those claims.