BRADENTON BEACH, Fla. - Suzi Fox knew there was trouble the second she saw turtle tracks going one way up the beach, but none headed back to the water.

"As we found this [turtle track], there should be an out crawl, there was an in crawl. It went forever, a quarter of the mile," Fox, the director of Anna Maria Island Turtle Watch, recalled.

She and a volunteer were patrolling the beach and followed the tracks, which lead them to a large hole with a loggerhead turtle stuck inside.

"I couldn't see the head of the turtle, she was so deep. Her breathing was so labored and hard. I said, 'My God, we got to get her out of there soon. I don’t think she will make it,'" said Fox.

She and Skip, the volunteer, called for help, but instead of waiting, Skip started digging.

Together, they dug a path for the turtle to crawl to the water.

"In 30 years, I have never had a turtle fall into a hole that could not get out of the hole. We’ve had hundreds of thousands of nests here and it’s never happened," Fox said.

The loggerhead was able to get to safety but left without laying her eggs.

"Did she nest again? We hope so. An option would have been she would have aborted the eggs in the gulf. Let’s hope she found Anna Naria again, back that night, after taking a little rest and put her eggs into her sand," said Fox. 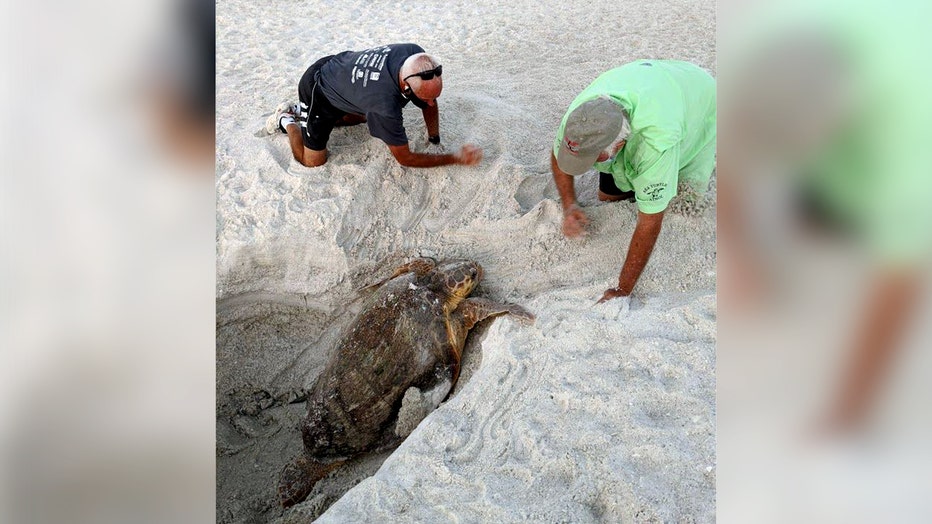 She hopes every visitor, resident and anyone who steps foot on the beach remembers a hole could turn into a dangerous trap.

"That would be the message to the world. Fill in your holes. Everyone needs to do a little extra right now especially for wildlife who need a voice," she said.

Anna Maria Island Turtle Watch made a video to help people to understand the dangers of holes on the beach. For more information about the organization, visit https://www.islandturtlewatch.com/