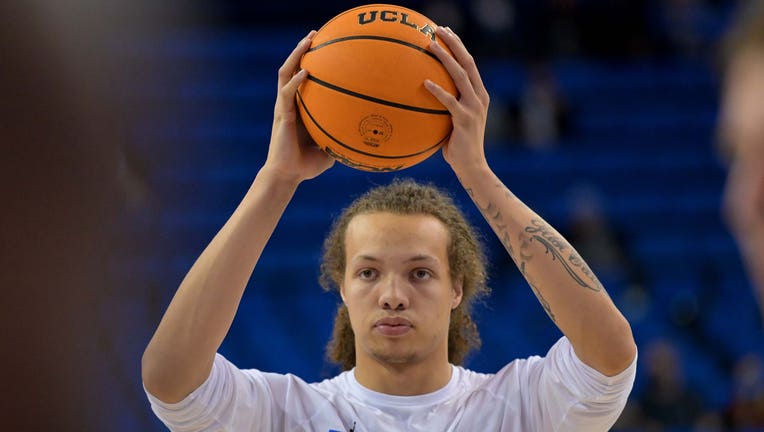 LOS ANGELES, CA - JANUARY 25: Mac Etienne #12 of the UCLA Bruins passes the ball as the team warms up before the game against the Arizona Wildcats at UCLA Pauley Pavilion on January 25, 2022 in Los Angeles, California. (Photo by Jayne Kamin-Oncea/Get

TUCSON, Ariz. - A UCLA basketball player was arrested in Arizona on Thursday and was facing an assault charge after allegedly spitting on a fan, authorities said.

The player was not identified by University of Arizona police, who announced the charge. He was taken into custody early Friday following the Bruins' loss to the Arizona Wildcats in Tucson, KVOA-TV of Tucson reported.

Barstool Arizona, however, identified the arrested player as UCLA forward Mac Etienne, in a tweet following the incident.

The alleged incident happened as Bruins players were heading off the court, into a tunnel toward their locker room, with fans gathered in nearby seats as they passed, some shouting to the players. Etienne, who did not play and was not in uniform, was seen exchanging words with a fan as he left the court with the team.

The video then shows the player making a spitting gesture several times in the direction of a fan before being grabbed by a security officer.

The player was then taken into custody, KVOA reported.

The Wildcats won 76-66, led by guard Kerr Kriisa, who hit a 3-point shot to seal the victory, and Dalen Terry’s standout performance.

Arizona entered halftime with a 12-point lead, which grew to 17 points in the second half. But UCLA showed up defensively later in the game and slowly climbed back.

With just two minutes remaining in the game, Kriisa hit the 3-pointer. UCLA and Arizona were both top-ranked teams going into Thursday’s game, at No. 3 and No. 7, respectively.

Get updates to this story at FOXNews.com