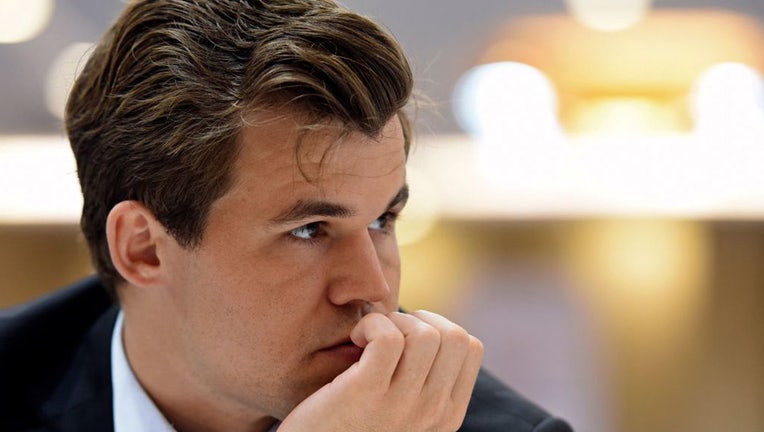 FILE - Norway's Magnus Carlsen competes during his Round 10 game against the Moldova's team at the 44th Chess Olympiad 2022, in Mahabalipuram on August 8, 2022. (ARUN SANKAR/AFP via Getty Images)

The shocking defeat of one of the best chess players in the world sparked accusations of cheating and has thrown the sport into a tailspin over the last few weeks.

"I've withdrawn from the tournament. I've always enjoyed playing in the @STLChessClub, and hope to be back in the future," he wrote, adding a link to a 2020 video from soccer manager Jose Mourinho who famously said after a match, "If I speak, I am in big trouble."

Niemann denied cheating in an interview with the Chess Club.

"I have never cheated in an over-the-board game. That is the worst thing I could do: cheat in a tournament with prize money," he said, via KSDK-TV.

"You know my dream came true. I lived my dream for a day beating Magnus, and then, all of this happened."

CHESS LEGEND MAGNUS CARLSEN UNMOTIVATED TO COMPETE IN WORLD CHAMPIONSHIP: 'I DON'T HAVE A LOT TO GAIN'

St. Louis Chess Club Executive Director Tony Rich told the station there have been anti-cheating measurements in place for the tournament. According to the Guardian, Niemann was also frisked before the match.

According to the International Chess Federation ratings, Niemann was No. 49 in the world with a 2688 rating. Carlsen was No. 1 with a 2861 rating.

Niemann finished in seventh place in the tournament.

The young chess player was also banned from Chess.com and uninvited from the Global Championship, according to the Guardian. The website told the New York Post that Niemann was banned for cheating on the website.

"We have reached out to Niemann to explain our decision to privately remove him from Chess.com and our events. We have shared detailed evidence with him concerning our decision, including the information that contradicts his statements [about] the amount and seriousness of his cheating on Chess.com," a spokesperson for the website told the New York Post.

The two players are both set to participate in the Julius Baer Generation Cup this weekend.