The Army said Wednesday it will immediately begin discharging soldiers who have refused to get the mandatory COVID-19 vaccine, putting more than 3,300 service members at risk of being thrown out soon. The Army’s announcement makes it the final military service to lay out its discharge policy for vaccine refusers. The Marine Corps, Air Force and Navy have already discharged active-duty troops or entry-level personnel at boot camps for refusing the shots. So far, the Army has not discharged any. According to data released by the Army last week, more than 3,300 soldiers have refused to get the vaccine. The Army has said that more than 3,000 soldiers have been issued official written reprimands, which suggests they are already identified in the disciplinary process, and some of them could be among the first to be discharged.

WASHINGTON - The Army said Wednesday that it will begin discharging soldiers who refuse to get the COVID-19 vaccine, saying it remains critical to maintaining a healthy, ready force.

It’s the latest move from branches of the U.S. military tasked with enforcing the Pentagon’s vaccine order for all service members, which was issued in August. Defense Secretary Lloyd Austin has said repeatedly that getting the vaccine is critical to maintaining combat readiness.

The Army's new order applies to regular Army soldiers, active-duty reserve-component soldiers and cadets, unless they have an approved or pending exemption. Secretary of the Army Christine Wormuth echoed Austin’s sentiments that unvaccinated soldiers present a "risk to the force and jeopardize readiness."

"Army readiness depends on Soldiers who are prepared to train, deploy, fight and win our nation’s wars," Wormuth said in a statement.

The Army, which is the U.S. military’s largest service with more than 478,000 active-duty soldiers, said in December that 98% of its force had received at least one dose by its Dec. 15 deadline. The Army had the last vaccine deadline among the services for their active-duty troops.

As of Jan. 26, the Army said it had discharged two battalion commanders and issued 3,073 general officer written reprimands to soldiers for refusing the vaccine order.

Under the new directive, Army commanders are to proceed with separation proceedings and are required to process the actions "as expeditiously as possible." It adds that service members "separated due to refusal of the COVID-19 vaccination order will not be eligible for involuntary separation pay and may be subject to recoupment of any unearned special or incentive pays."

Other branches of the U.S. military, including the U.S. Air Force, Navy and Marine Corps, have also begun to remove those who have chosen not to get the COVID-19 vaccine. 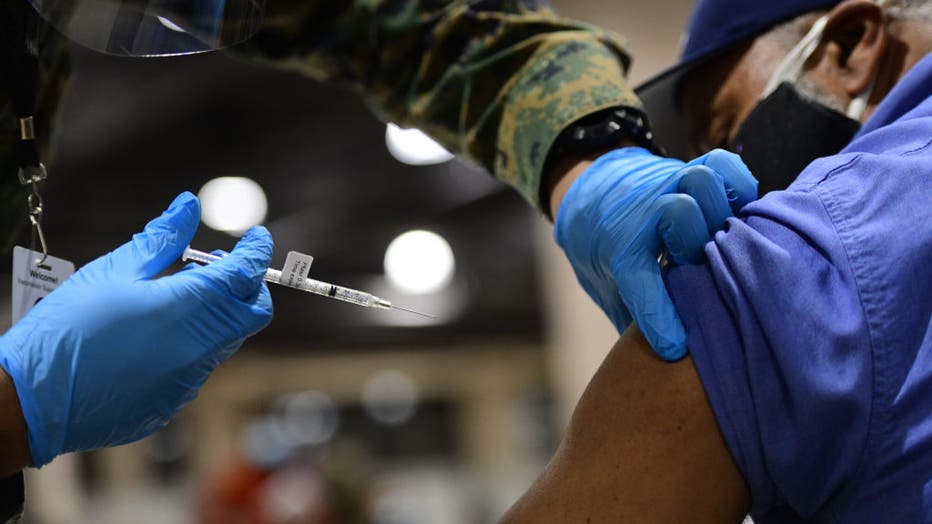 FILE - A member of the U.S. Armed Forces administers a dose of the Pfizer COVID-19 vaccine at a FEMA community vaccination center on March 2, 2021, in Philadelphia, Pennsylvania. (Photo by Mark Makela/Getty Images)

Last week, the Navy said it had discharged at least 23 active-duty sailors for refusing the vaccine, marking the first time it has thrown currently serving sailors out of the military over the mandatory shots. The Navy also released new COVID-19 guidance that requires all deployed sailors and air crew to be vaccinated but relaxes some quarantine practices on ships based on recommendations from the Centers for Disease Control and Prevention.

Navy leaders said all operational units — meaning those involved in deployments out to sea — must be 100% vaccinated, and any sailors who have approved medical or administrative exemptions are shifted to shore duty.

A significant majority of the Navy's force is in operational units, and the requirement rules out the use of any unvaccinated sailor — such as a Navy SEAL — on a deployed ship, even if they have an approved exemption or are in the process of seeking an exemption. A number of SEALs and other special warfare sailors have filed suit against the mandatory vaccine.

These discharges come as the number of troops removed from the military due to vaccine refusals begins to climb across the services. The Marine Corps, as of mid-January, had discharged 334 Marines, and the Air Force, as of last week, had discharged 111 airmen for refusing to get the shots.

The Army had remained the only service that had not yet discharged any active-duty personnel due to vaccine refusal.

The military services have been going through a methodical process to deal with those who refuse the vaccine as well as those who request medical, administrative or religious exemptions. The reviews require counseling with medical personnel and chaplains as well as senior commanders.

Members of the U.S. military are already required to get as many as 17 vaccines, depending on where they are deployed, according to the Associated Press. The requirements — which include shots for smallpox, hepatitis, polio and the flu — also provide for a number of temporary and permanent exemptions for either medical or administrative reasons.