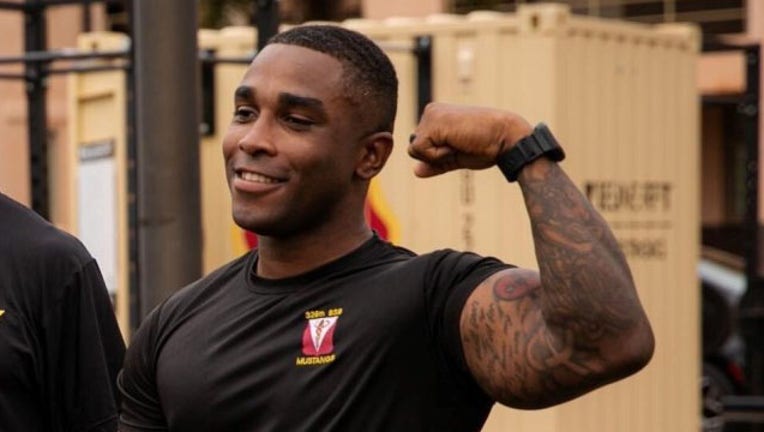 WASHINGTON - The U.S. Army recently eased its restrictions on tattoos, freeing up processing times for new recruits and opening up to a wider pool of candidates looking to serve — a move echoed by other branches of the military as tattoos become more widely accepted in society.

The new Army regulations, announced on June 23, allow recruits and current soldiers to receive tattoos on their hands, the back of their ears, and the back of their necks. Previously, Army recruits who had tattoos in these areas had to file waiver exceptions, which could take weeks before they could be processed into service, officials said.

"We always review policy to keep the Army as an open option to as many people as possible who want to serve," Maj. Gen. Doug Stitt, U.S. Army’s director of military personnel management, said in a statement. "This directive makes sense for currently serving Soldiers and allows a greater number of talented individuals the opportunity to serve now."

Specifically, soldiers can now have one tattoo on each hand as long as it doesn’t exceed 1 inch in length. They can have one tattoo — no larger than 2 inches — on the back of their neck. One, 1-inch tattoo is also allowed behind each ear.

Additionally, tattoos between fingers are OK as long as the designs "cannot be seen when the fingers are closed," officials said. The Army already allows tattoos on soldiers’ arms and legs as long as they do not become visible above the collar.

Face tattoos are prohibited, and soldiers are not allowed to cover up tattoos with bandages or wrappings to comply with the policy, officials said. Tattoo designs must not contain any "offensive, extremist or hateful words or images." 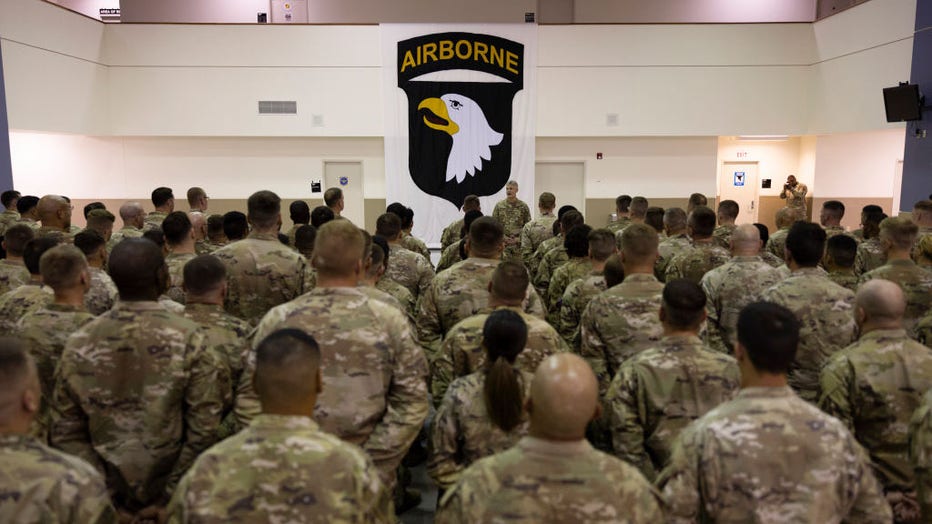 FILE IMAGE - U.S. Army Col. Scott D. Wilkinson delivers a message to members of the 2nd Brigade Combat Team of the 101st Airborne Division prior to their departure for Europe on July 6, 2022, in Fort Campbell, Kentucky. (Photo by Brett Carlsen/Getty

The U.S. Army first began allowing soldiers to have tattoos in 2015. It noted how tattoos have grown in popularity among younger people, citing research by the Army’s Training and Doctrine Command (TRADOC) showing that 41% of those between the ages of 18 and 34 have at least one or more.

The Navy and Marines have less restrictive tattoo policies, and Army recruiting officials recommended the new changes to senior leaders in an effort to keep potential recruits.

Army recruiters filed more than 650 waivers in 2022 as of May for active duty and reserve recruits, according to TRADOC Enlisted Chief David Andrews. The waivers can take up to two weeks and can impact the recruiting process "because potential recruits who previously had tattoos in restricted areas could have decided to enlist in another military branch."

"[The directive] gives us the opportunity to put people in [the Army] right away that have these types of tattoos," Andrews said. "We don’t want people walking away from opportunities in the Army who are otherwise qualified."

Previously, the service only allowed ring tattoos on hands.

"Everyone has a different reason for getting a tattoo," said Sykes who has tattoos herself. "Some see it as art, some see it as individuality, and some may even have cultural tattoos. Tattoos are more [accepted] now; it’s a change in society."

Those under 55 years old in the survey were twice as likely to have at least one tattoo. For those with tattoos, the poll found that 33% had at least two tattoos — and the average number of tattoos among those with body art was four.

As attitudes toward tattoos continue to evolve in the U.S., so have the policies among America’s other military branches. Here’s a look at their various tattoo policies:

The official U.S. Marine Corps policy on tattoos notes how Americans "expect Marines to be disciplined, physically fit, and ready to accomplish any mission."

"They also expect Marines to represent the nation they are sworn to protect," the policy states. "The tattoo policy over the years has attempted to balance the individual desires of Marines with the need to maintain the disciplined appearance expected of our profession."

Marines can have tattoos on any area of the body, except for the head, neck, and hands in most cases. Banned tattoos include those that are "drug-related, gang-related, extremist, obscene or indecent, sexist, or racist."

Check or back tattoos must be "below the collarbone and seventh cervical vertebrae (C7)." Tattoos on the chest or back must be covered by wearing a properly fitting crewneck T-shirt with no portion of the tattoo showing, according to the policy.

Lower arm tattoos may be "no further than a line around the circumference of the wrist measured at the wrist bone."

Tattoos on the hands and fingers are banned, with the exception of a single band tattoo "of no more than 3/8 of an inch in width on one finger of each hand."

Marines or recruits with tattoos outside of the allowed areas can request an exemption to the policy, "with the understanding that (such exceptions) are not likely to be approved," the policy states.

The Crucible is the final challenge for Marine recruits.

The U.S. Coast Guard says its tattoo policy "strikes a balance between personal expression and maintaining our sharp military appearance" as it aims to continue recruiting and keeping its next generation of Coast Guardsman.

There’s also no limit on the number of tattoos one can have, but there are restrictions on where they can be on the body. Chest tattoos that are visible above the Coast Guard crew neck T-shirt are not allowed.

Service members can have one, 1-inch tattoo on each hand, but it can’t go past "the first knuckle closest to the wrist."

One finger tattoo per hand is also allowed "within the length of the finger from the first to the second knuckle," according to the Coast Guard tattoo policy.

Additionally, one ring tattoo per hand is allowed on the wearer's finger — but not the thumb. 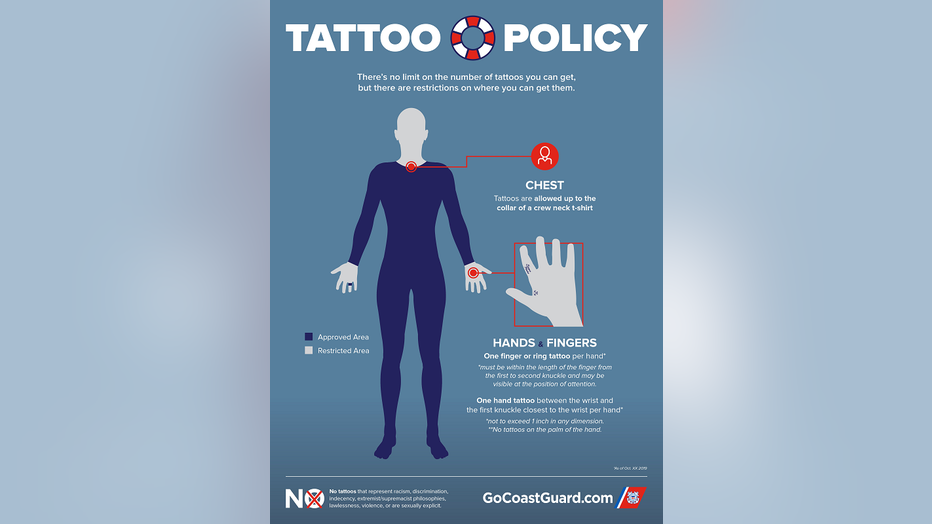 Tattoos in the U.S. Air Force are allowed on the chest and back — below the open-collar uniform — as well as on the arms, legs, and as a ring tattoo on one finger on one hand, according to the official policy sent to FOX Television Stations.

"Ring tattoos are limited to a single band of no more than 3/8 of an inch in width, below the knuckle and above the finger joint (portion closest to the palm)," the policy states.

It adds that there are no size or placement limitations on tattoos as long as they are in accordance with its official rules.

Tattoos are not allowed on the head and neck in the area above the open collar uniform, as well as on the lips and tongue. Any tattoos that are "obscene, commonly associated with gangs, extremist, and/or supremacist organizations, or that advocate sexual, racial, ethnic, or religious discrimination are prohibited in and out of uniform."

"Indecent tattoos/brands/body markings are grossly offensive to modesty, decency, or propriety, or shocks the moral sense, because of its vulgar, filthy, or disgusting nature, or its tendency to incite lustful thought. It is indecent if it tends reasonably to corrupt morals or incite libidinous thoughts," the U.S. Air Force tattoo policy states.

Like other branches of the U.S. Armed Forces, the Navy updated its tattoo policy in 2016 in an effort to ensure that the branch is able to recruit and keep talented sailors.

"The tattoo policy change was made to reflect tattoo realities in the nation our military serves. The Navy does not want to miss opportunities to bring in talented men and women willing to serve," it said in a 2016 publication of All Hands, the U.S. Navy magazine.

Neck and sleeve tattoos are allowed, officials said. But tattoos that are "prejudicial to good order, discipline, and morale, or be of a nature that brings discredit upon the naval service" are banned, including those that are racist, sexist, extremist, or indecent. Commanding officers and the chain of command are responsible for making these determinations.

Specifically, one tattoo is allowed on the neck, but it cannot exceed one inch in any direction. Any size or amount of tattoos on the arms and legs are allowed, officials said.

The U.S. Space Force, the country’s newest military service branch, allows tattoos on the chest and back (below the open-collar uniform), arms, legs, and feet, according to its official policy.

Chest and back tattoos cannot be visible through any uniform or visible while wearing an open collar uniform. One tattoo on the neck or behind the ear is allowed, but it can’t exceed 1 inch in any direction. Neck tattoos also can’t be located on the front of the neck. 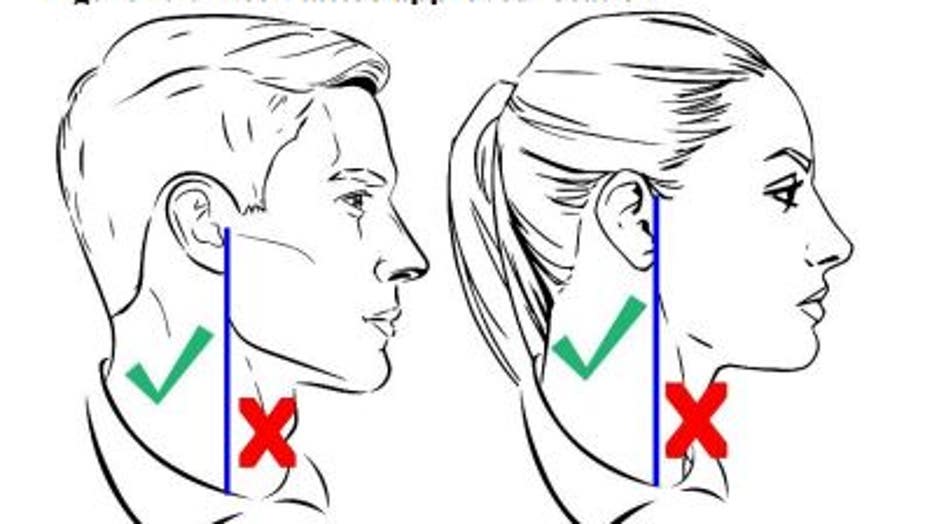 Ring tattoos are limited "to a single band, no more than 3/8 of an inch in width, below the knuckle and above the finger joint on one or both hands." Only one ring tattoo is allowed per hand, the policy states. Tattoos elsewhere on the hand are not allowed.

There are no other size or placement limitations on tattoos as long as they are in accordance with the official policy.