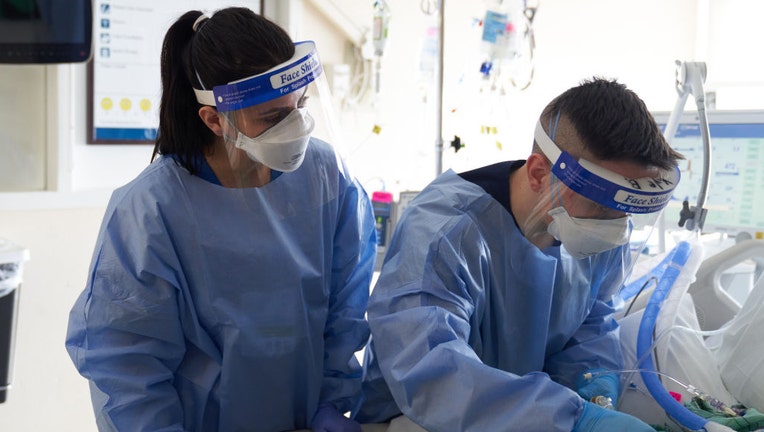 With American hospitals facing a dire shortage of nurses amid a slogging pandemic, many are looking abroad for health care workers.

And it could be just in time.

There's an unusually high number of green cards available this year for foreign professionals, including nurses, who want to move to the United States — twice as many as just a few years ago. That's because U.S. consulates shut down during the coronavirus pandemic weren't issuing visas to relatives of American citizens, and, by law, these unused slots now get transferred to eligible workers.

Amy L. Erlbacher-Anderson, an immigration attorney in Omaha, Nebraska, said she has seen more demand for foreign nurses in two years than the rest of her 18-year career. And this year, she said, it's more likely they'll get approved to come, so long as U.S. consular offices can process all the applications.

"We have double the number of visas we've had available for decades," she said. "That is kind of temporarily creating a very open situation."

U.S. hospitals are struggling with a shortage of nurses that worsened as pandemic burnout led many to retire or leave their jobs. Meanwhile, coronavirus cases continue to rise and fall, placing tremendous pressure on the health care system. In California alone, there's an estimated gap of 40,000 nurses, or 14% of the workforce, according to a recent report by the University of California, San Francisco.

Hospitals are filling the gap by hiring traveling nurses, but that can be expensive. And hospital administrators say not enough nurses are graduating from U.S. schools each year to meet the demand.

Some hospitals have long brought nurses from the Philippines, Jamaica and other English-speaking countries, and more are now following suit. And both longtime recruiters and newcomers are trying to take advantage of the green card windfall before the fiscal year ends in September.

The U.S. typically offers at least 140,000 green cards each year to people moving to the country permanently for certain professional jobs, including nursing. Most are issued to people who are already living in the United States on temporary visas, though some go to workers overseas.

This year, 280,000 of these green cards are available, and recruiters hope some of the extras can be snapped up by nurses seeking to work in pandemic-weary hospitals in the United States.

The Biden administration, which has made moves to reverse Trump-era policies restricting legal immigration, has taken some steps to try to help foreign health care workers so they can assist with the pandemic. U.S. Citizenship and Immigration Services said it would speed the renewal of work permits for health care workers, which could help keep some foreign citizens already in the United States on the job.

The State Department told consulates last year to prioritize applications for workers at facilities that are responding to the pandemic, an agency official said.

Faith Akinmade, a 22-year-old nurse from Nigeria, is among those hoping for a quick solution. After completing college in the U.S., Akinmade has been working as an ICU nurse for University of Louisville Hospital in Kentucky. But her work permit is set to expire in March. She said she needs it renewed, or her green card approved, to stay on the job.

"At this point and time, I just feel like I have faith that at the end of March something is going to show up to continue to work," Akinmade said. She said the issue affects many of her international colleagues as well as domestic ones, who may be pressed to take on shifts for colleagues if their immigration paperwork doesn’t come through.

Dr. Roxie Wells, president of Cape Fear Valley Hoke Hospital in Raeford, North Carolina, said she started trying to bring over foreign nurses before the pandemic, but it wasn't until last year that these recruits started getting consular interviews in larger numbers. So far, about 150 were approved to come work, but Wells said they're still waiting on another 75.

"Obviously it has become more necessary during the pandemic," she said. "The 150, if we didn’t have them, we would be in a precarious situation."

The surge in the omicron variant in the United States has made the strained staffing situation even more apparent in hospitals as health care workers, like so many others, have been sickened by the highly contagious virus and sidelined from work at a time when more patients are coming in.

Sinead Carbery, president of Nurse Staffing Solutions for AMN Healthcare, said the demand for international nurses has risen between 300% and 400% since the pandemic began. The number of nurses that can be brought into the United States even with the additional green cards won't be enough to meet demand, and many more recruiters are now seeking to hire nurses overseas because there are immigrant visas available, she said.

"This is a window of opportunity," she said. "Because everything is flowing so well, there's a lot of competition for that talent."

National Nurses United, a union representing 175,000 registered nurses, said more scrutiny should be given to international recruitment to ensure foreign nurses aren't brought in and subjected to unsafe working conditions. The union contends hospitals drove away U.S. nurses by keeping staffing levels so low — and this was well before concerns arose about worker safety and protections during the COVID-19 pandemic.

Michelle Mahon, the union's assistant director of nursing practice, said many foreign nurses sign yearslong contracts with employers, which can make it hard for them to speak up about labor or patient safety concerns. She said hospitals that saw nurses quit during the pandemic are turning to an overseas workforce to replace them.

"This kind of dynamic is particularly attractive right now to employers who have not made any of the changes necessary to ensure patient and nursing safety during this COVID-19 pandemic," Mahon said. "Instead of them addressing the actual problem, they want to go and pivot to this other really fake solution."

Hospital administrators, however, contend there simply aren’t enough U.S.-trained nurses to go around. Patty Jeffrey, president of the American Association of International Healthcare Recruitment, said the United States should expand nursing education programs to train more nurses domestically, as well as let more nurses come in from overseas. But she acknowledged bringing in a much larger number of nurses would require legislation.

"The calls are every day ringing off the hook: We need 100, we need 200, we need all these nurses," Jeffrey said.
Jorge Almeida Neri, a 26-year-old nurse from Portugal, arrived in the United States in December, though he began the process before the pandemic.

He said a required international nursing exam was delayed due to the virus and it took four months to get a consular interview, though other international nurses he's met waited much longer. He interviewed for his current job at a Virginia hospital, which he got through a staffing agency, about a year ago.

"After getting everything certified, the immigration process started, and I was like, ‘Oh, this is going to be quick.’ I was wrong," he said.

Almeida Neri said many Portuguese nurses seek work overseas since wages are low, though many go elsewhere in Europe, which doesn't take as long as the United States.

Despite the demand, there's no guarantee hospitals will in fact snap up more visas. Greg Siskind, an immigration attorney, said U.S. consular offices aren't required to issue visas solely because they're available, and are hampered by limits on remote work and video interviews. He said most employment-based green cards tend to go to professionals already in the United States, not overseas, though more could be done to speed these up, too.

"Under their current policies, if they don't make any changes, it is going to be hard," he said of the likelihood the U.S. government will issue all the available visas, "but there's a lot of things they could do."