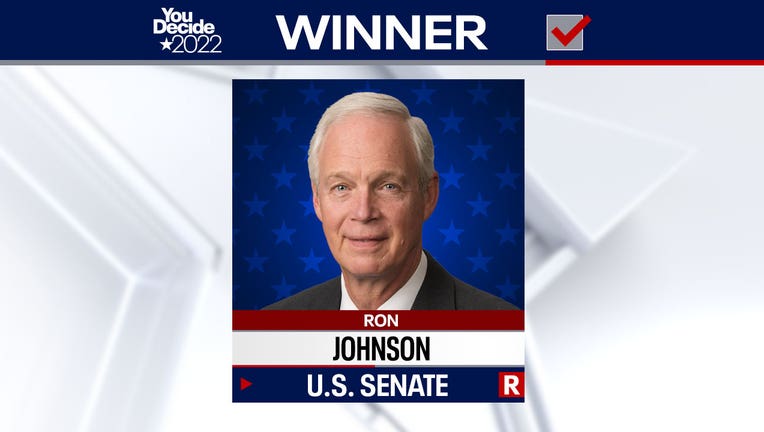 The Associated Press called the race 11:46 a.m.; with 98% of precincts reporting, the AP showed Johnson with a lead of roughly 27,000 votes – a one-point margin of victory.

The senator issued a statement on Wednesday morning, Nov. 9 – before his projected win – saying the race between him and Barnes was "over."

"The corporate media is refusing to call a race that is over.

"The votes are in. In all Democrat strongholds, municipalities are reporting 100% of wards are in and counted. There are some counties that have anywhere from 3-10% of the votes outstanding. These localities represent areas where we are winning by over 60%.

"There is no path mathematically for Lt. Gov. Barnes to overcome his 27,374 vote deficit. This race is over.

"Truth has prevailed over lies and the politics of personal destruction. I want to thank my family and everyone who supported me and worked so hard to save this U.S. Senate seat. I will do everything I can to help make things better for Wisconsinites and to heal and unify our country."

Statement from the Republican National Committee:

"Congratulations to Senator Ron Johnson, Congressman Bryan Steil, Congressman-elect Derrick Van Orden, and all of our Republican candidates up-and-down the ballot on their victories. Tonight, Wisconsin families, farmers, and small businesses from Superior to Racine rejected the Democrats’ policies that put violent criminals back on the streets, raised prices at gas stations and grocery stores, and prioritized the teachers’ union ahead of Badger State students."

After the polls closed

The senator spoke to supporters around 1 a.m. Wednesday. He said he would not declare victory until all the numbers were in, but he told his supporters, "This race is over." Johnson said he expected they would declare victory later Wednesday morning.

"The sense that this race is over, you know? I think I, quite honestly, I think anybody looking at the numbers would have to admit that fact, but for whatever reason, they're not willing to call it but I don't see torturing you guys any more by staying up till, you know, for a couple more hours because who knows how long they'll take to actually call this race, so, you know, we'll wait till all the numbers come in before I declare final victory," said Johnson early Wednesday. "But, you know, I do believe that this time truth has prevailed over the lies, over the character assassination. But I will say, unfortunately, it's still so close, and that's so depressing, isn't it, that the lies can be that effective and if you ever if you ever wonder, quite honestly, why more good people don't run for office, I would just recommend people take a look at the Wisconsin U.S. Senate race in the year 2022, and you might get that answer. But anyway, thank you so much for coming. I have to thank my wife, Jane. You know, I have to thank all my family that's so supportive. I want to thank all of you, all my supporters. I know how hard, how tirelessly you all worked. It's been quite a campaign, and I can't tell you how much I appreciate that. I want to thank all my staff, both in my Senate office who do tremendous work for our constituents. I want to thank everybody in the campaign staff, and let's wait for all the numbers to come in and then we'll declare victory tomorrow morning. Have a good evening. Thank you. Thank you all. Now go home. Go to bed."

"We always knew this race would be incredibly close. No matter what anyone says, we are committed to making sure every vote is counted. We will wait and see what the Wisconsin voters have decided after all their voices are heard."

Just before midnight, with nearly 90% of the expected votes counted, Johnson held a narrow lead.

On the eve of the election, he wrapped up a bus tour that included 60 stops across Wisconsin. 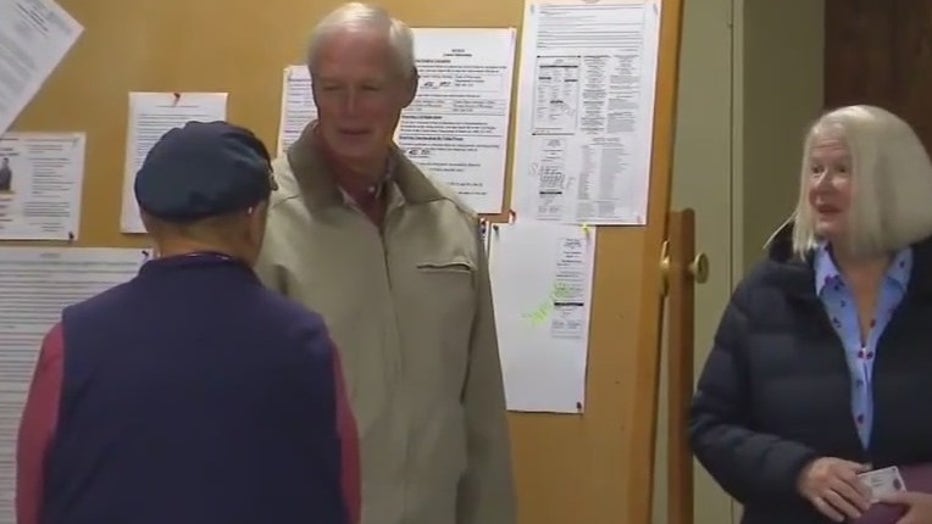 He told reporters Tuesday that a third term would send a message to Democrats.

"I'd like to win by a wide margin, not for partisan purposes, but literally so that we'll send a very strong signal to our Democratic colleagues that their policies aren't working, that they'll actually work with us to reduce deficit spending, end their war on fossil fuel, get tough on crime, secure the border," said Johnson.

Johnson and his supporters gathered Tuesday night at the Bridgewood Resort in Neenah.

Just as the polls closed at 8 p.m., Johnson came out to shake hands and take pictures with his supporters. He took the stage for a couple minutes to get the crowd to sing "Happy Birthday" to some of his family members.

Every voter FOX6 News spoke with Tuesday night said Johnson was their pick because they have more confidence in him to address inflation.

"It's my pocketbook, for one, with the inflation. I mean, it's one of those things where it's like, you go to the grocery store, and what do I buy?" one voter said.

"When you think about what we're facing right now, people are telling me they're going to the pump. They don't know if it's gonna be $3.79 or $4.19 for a gallon," another voter said. "Then they gotta go to the store and start buying their groceries, and that price is up. There's a lot of frustration out there, and they're taking it out on the Biden administration, the Evers administration saying, 'They didn't do enough for us.'"

The final Marquette University Law School Poll before the election, released Nov. 2, showed the incumbent Johnson with a narrow lead over challenger Lt. Gov. Mandela Barnes (D-Wisconsin) – 50% for Johnson, 48% for Barnes. That result was within the poll's margin of error.

In an essay announcing his re-election bid in January, Johnson acknowledged his past promise to serve no more than two terms. He added he and his wife would look forward to retirement, but the 67-year-old decided the stakes were too high to step aside.

"I believe America is in peril. Much as I’d like to ease into a quiet retirement, I don’t feel I should," Johnson wrote in the essay, which was published in The Wall Street Journal.

Before first taking office in 2010, Johnson launched a successful manufacturing career in Oshkosh. He co-founded a plastics company with his brother-in-law, where he says he did everything from running the machines to managing the books and selling products.

Johnson unseated then-U.S. Sen. Russ Feingold (D-Wisconsin), who had served nearly two decades, in 2010 by more than 100,000 votes. Feingold challenged Johnson for the seat in 2016, but Johnson won again – though by a narrower margin.

In 2015, Johnson authored a bill included in the National Defense Authorization Act to establish metrics as a measure of border security. 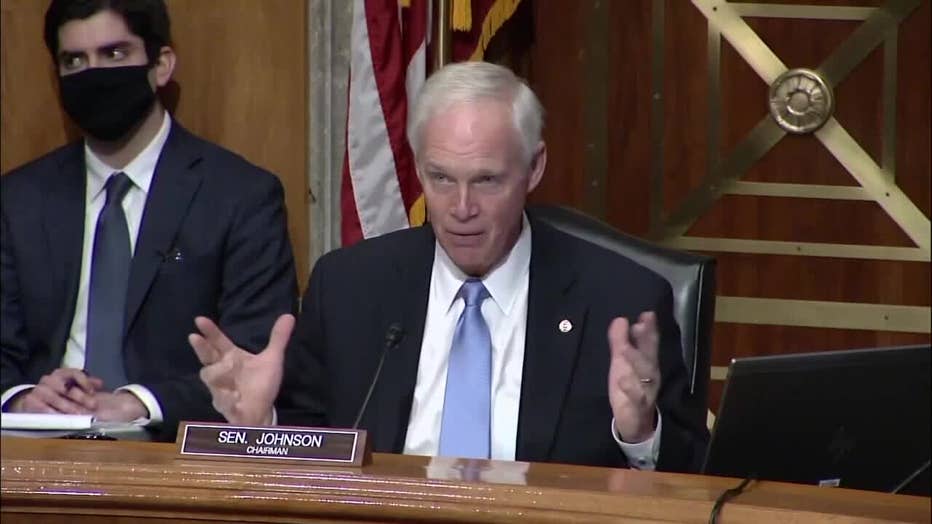 Johnson on the issues

The senator long criticized calls from his opponent, Barnes, that advocated for progressive bail reform. Instead, he pointed to incidents including the Waukesha Christmas parade attack and record homicide numbers in Milwaukee. Johnson said now is the time to support law enforcement.

"If you want to reduce crime, first of all, you have to fully fund the police, and, of course, my opponent is opposed to fully funding police budgets but we need to keep criminals in jail," Johnson said during an Oct. 7 debate hosted by the Wisconsin Broadcasters Association.

Johnson said the "defund the police" movement is making it harder for law enforcement agencies in Wisconsin to hire.

Johnson praised the U.S. Supreme Court's reversal of Roe v. Wade and, in 2011, cosponsored the "Life at Conception Act." The senator proposed issuing a statewide referendum for voters to decide how far along in a pregnancy an abortion can take place. However, the U.S. Senate does not govern state law.

The senator accused President Joe Biden and his administration of downplaying the seriousness of what's happening at the southern border. In August, Johnson hosted a roundtable on the crisis with local and national members of law enforcement in Milwaukee to explain how it's impacting Wisconsin through drug and human trafficking.

In the months before the election, Johnson ramped up discussion on inflation, rising gas prices and its impact on Wisconsin families. On gas prices, Johnson said the rise underscores the need for energy independence in the U.S. – including investment in oil pipelines.

"We were energy independent under the last administration. If you're concerned about climate change, you should be supporting nuclear power, but most environmentalists oppose nuclear power so there's a solution here. It's just, environmentalists like Lt. Gov. Barnes won't embrace the real solution," Johnson said.

Johnson also called the Biden administration's student loan debt relief plan "grossly unfair to families who didn't send their kids to college or managed to pay off their student debt."

More FOX6 News coverage on the race for U.S. Senate