The reopening plans are being halted for three weeks, according to a July 1 announcement.

PHOENIX (AP) - The U.S. has set a new record for confirmed COVID-19 cases reported in a single day as new coronavirus infections surge across the country amid hasty reopenings in many states. 44,766 new cases were logged by Johns Hopkins’ Coronavirus Resource Center on July 1, surpassing previous record days in June and April.

By July 1, in response to the rise in cases, California closed bars, theaters and indoor restaurant dining all over again across most of the state Wednesday, and Arizona's outbreak grew more severe by nearly every measure as the surging coronavirus crisis across the South and West sent a shudder through the country.

The run-up in confirmed cases has been blamed in part on what's been called "knucklehead behavior” by Americans not wearing masks or obeying social-distancing rules as economies reopened from coast to coast over the past two months. “The bottom line is the spread of this virus continues at a rate that is particularly concerning,” California Gov. Gavin Newsom said in dramatically expanding the round of closings he announced over the weekend. 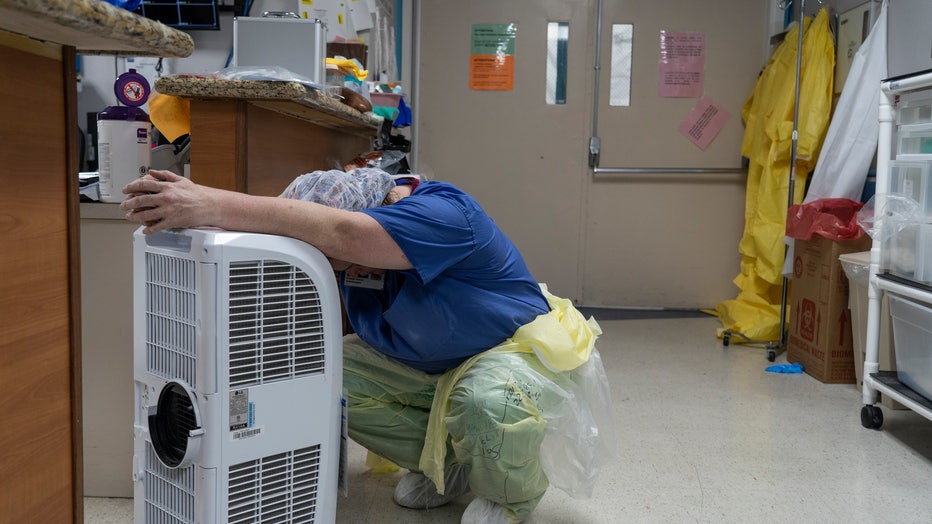 FILE - A medical staff member rests in front of a fan in the Covid-19 intensive care unit at the United Memorial Medical Center on June 30, 2020 in Houston, Texas. (Photo by Go Nakamura/Getty Images)

The shutdown announcement, which came just ahead of what is expected to be a busy Fourth of July weekend that could fuel the spread of the virus, applies to 19 counties encompassing nearly three-quarters of California's 40 million people, including Los Angeles County.

Confirmed cases in California have increased nearly 50% over the past two weeks, and COVID-19 hospitalizations have gone up 43%. Newsom reported nearly 5,900 new cases and 110 more deaths in 24 hours.

With one of the biggest weekends of the summer approaching, the Centers for Disease Control and Prevention advised Americans to wear face coverings at the beach, though not in the water.

Despite the resurgence of coronavirus across the U.S., President Donald Trump spoke Wednesday about the virus as if it were a nuisance he hopes will eventually just go away.

"I think we are going to be very good with the coronavirus," he said in an interview with Fox Business. “I think that, at some point, that’s going to sort of just disappear, I hope.”

Meanwhile, a masked Vice President Mike Pence paid a visit to Arizona, where cases have spiked since stay-at-home orders expired in mid-May. The state reported record single-day highs for new cases (almost 4,900), deaths (88), ER visits (close to 1,300) and the number of people in the hospital (nearly 2,900).

RELATED: It’s not just the lungs — COVID-19 can affect the brain and heart of those infected, researchers say

In Florida, the biggest hospital in the hardest-hit county, Miami's Jackson Health System, scaled back elective surgeries and other procedures as it and others around the state braced for an influx of victims.

Florida recorded more than 6,500 new cases — down from around 9,000 on some days last week, but still alarming — and a running total of over 3,500 deaths. Counties in South Florida are closing beaches to fend off large July Fourth crowds that could spread the virus.

“Too many people were crowding into restaurants late at night, turning these establishments into breeding grounds for this deadly virus," Miami-Dade Mayor Carlos Gimenez said in forbidding restaurants with seating for more than eight people from serving customers inside from midnight to 6 a.m.

Louisiana saw its biggest daily spike since April, reporting 2,100 new cases in 24 hours. Georgia set a new daily record with nearly 3,000 new cases. Texas did too, with new infections skyrocketing past 8,000 in a single day for the first time.
Marilyn Rauth, a senior citizen in Punta Gorda, said Florida's reopening was “too much too soon” and blamed Republican Gov. Ron DeSantis.

South Dakota's governor says there will be no social distancing measures in place for Fourth of July event.

“The sad thing is the COVID spread will probably go on for some time, though we could have flattened the curve with responsible leadership," she said. “Experience now has shown most people won’t social distance at beaches, bars, etc. The governor evidently has no concern for the health of the state’s citizens.”

The soaring numbers across the Sunbelt have raised fears that many other states could see the same phenomenon if they reopen too, and that people from the South and West could spread the virus to other regions.

Some distant states and cities that seemed to have tamed their outbreaks, including Colorado, Virginia, Delaware and New Jersey, hit pause or backtracked on some of their reopening plans for bars and restaurants as they watched the crisis unfold from afar.

Also, New York and New Jersey are asking visitors from 16 states from the Carolinas to California to quarantine themselves for two weeks.

New York Mayor Bill de Blasio said the city is delaying its resumption of indoor dining at restaurants, and not because of any rise in cases there.

“Even a week ago, honestly, I was hopeful we could. But the news we have gotten from around the country gets worse and worse all the time,” he said.

The number of confirmed cases in the U.S. per day has roughly doubled over the past month, hitting 44,800 on Tuesday, according to a count kept by Johns Hopkins University. That is higher even than what the nation witnessed during the deadliest stretch of the crisis in mid-April through early May.

Dr. Anthony Fauci, the nation’s top infectious-disease expert, warned on Capitol Hill on Tuesday that the rise across the South and West “puts the entire country at risk” and that new infections could reach 100,000 a day if people don’t start listening to public health authorities.

The virus in the U.S. is blamed for more than 2.6 million confirmed cases and over 127,000 deaths, the highest toll in the world, by Johns Hopkins' count. Worldwide, the number of infections is put at more than 10.6 million, with over a half-million deaths.

The real numbers in the U.S. and globally are believed to be significantly higher, in part because of limited testing and mild cases that have gone unrecorded.

The number of deaths per day in the U.S. has continued to drop over the past week and is down to an average of about 550, compared with a peak of around 2,200 a day in mid-April, according to an Associated Press analysis.

But experts note that deaths are a lagging indicator — it takes time for people to get sick and die — and they warn that the trend could reverse itself.

In New Jersey, where cases had been declining since late April, Gov. Phil Murphy announced a pause on Monday, in part because of people not wearing masks and social distancing.

“Unfortunately, the national scene, compounded by instances of knucklehead behavior here at home, are requiring us to hit pause on the restart of indoor dining for the foreseeable future,” he said.