The suspect, identified by Abbott as Salvador Ramos, entered Robb Elementary School after abandoning his vehicle with a handgun and possibly a rifle. Authorities added that many of the victims were in the second through fourth grades.

Eva Mireles, a 44-year-old, fourth-grade teacher, was identified as one of the victims of the deadly shooting, though most of the individuals were not immediately identified by authorities. District officials asked for privacy and prayers as they began the process of identifying victims and notifying families.

Superintendent Hal Harrell said the school would be closed for the remainder of the week, effectively bringing the school year to a close.

Before heading to the school, Ramos shot his grandmother, according to state Sen. Roland Gutierrez, who said he had been briefed by state police. Other officials said that the grandmother survived and was being treated, though her condition was not known.

President Joe Biden somberly addressed the nation on Tuesday night after issuing a proclamation, ordering flags to be flown at half-staff to honor the victims.

"I hoped, as president, I would not have to do this again," he said from the White House.

Biden renewed his call for gun control in what he called "common-sense gun laws" by banning assault-style weapons.

"We have to act, and don't tell me we can't have an impact on this carnage," he continued. "It's time to turn this pain into action."

Superintendent: 'We need your prayers'

Earlier Tuesday, authorities said 13 children were taken by ambulance or bus to Uvalde Memorial Hospital in Uvalde, which is about 85 miles west of San Antonio. Another hospital, University Hospital in San Antonio, said a 66-year-old woman was in critical condition.

Two police officers were shot and wounded but were expected to survive, Abbott said.

"Texans across the state are grieving for the victims of this senseless crime and for the community of Uvalde," Abott later added in a written statement. "Cecilia and I mourn this horrific loss and we urge all Texans to come together to show our unwavering support to all who are suffering."

"We thank the courageous first responders who worked to finally secure Robb Elementary School," he continued. "I have instructed the Texas Department of Public Safety and the Texas Rangers to work with local law enforcement to fully investigate this crime. The Texas Division of Emergency Management is charged with providing local officials all resources necessary to respond to this tragedy as the State of Texas works to ensure the community has what it needs to heal."

"Our prayer tonight is for those parents, lying in bed and trying to figure out ‘Will I be able to sleep again? What do I say to my other children? What happens tomorrow?' May God bless the loss of innocent life on this sad day. May the Lord be near the broken-hearted, save those crushed in spirit because they're going to need a lot of help and a lot of our prayers. God love you."

The Uvalde Consolidated Independent School District had initially reported an active shooter at the school, which has an enrollment of just under 600 students. All schools in the district were then locked down because of gunshots in the area.

A heavy police presence remained at the school Tuesday evening, with officers in heavy vests diverting traffic and federal agents coming and going from the building.

The district said that the city's civic center was being used as a reunification center.

Uvalde is home to about 16,000 people and is the seat of government for Uvalde County. The town is about 75 miles from the border with Mexico.

Robb Elementary is in a mostly residential neighborhood of modest homes. There is a funeral home across the street from the school. 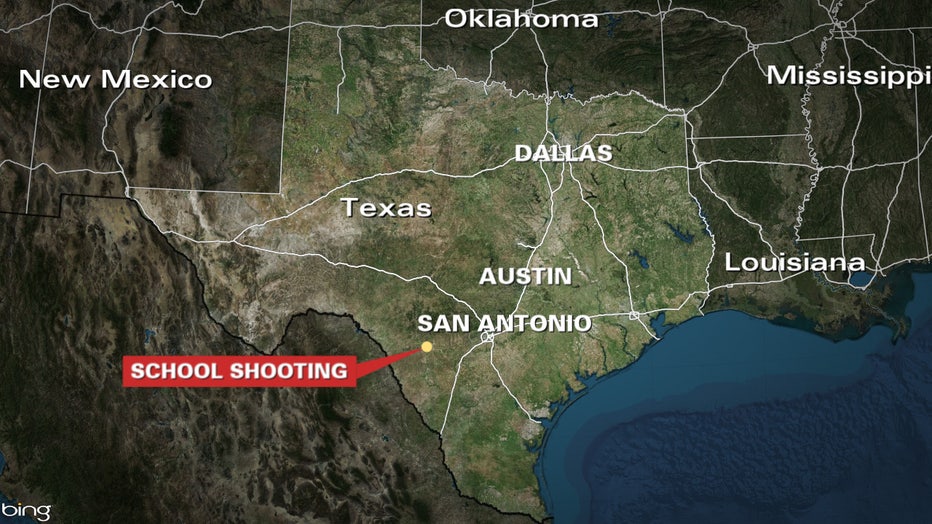 Map showing location of shooting at school in Uvalde, Texas.

The shooting in Texas came less than two weeks after a gunman opened fire at a supermarket in Buffalo, New York, killing 10 Black shoppers and workers in what officials have described as a hate crime.

It was also the deadliest shooting at a U.S. grade school since a gunman killed 20 children and six adults at Sandy Hook Elementary in Newtown, Connecticut, almost a decade ago.

In 2018, a gunman fatally shot 10 people at Santa Fe High School in the Houston area. A year before that, a gunman at a Texas church killed more than two dozen people during a Sunday service in the small town of Sutherland Springs. In 2019, another gunman at a Walmart in El Paso killed 23 people in a racist attack.

The shooting came days before the National Rifle Association annual convention was set to begin in Houston. Abbott and both of Texas’ U.S. senators were among elected Republican officials who were the scheduled speakers at a Friday leadership forum sponsored by the NRA’s lobbying arm.

In the years since Sandy Hook, the gun control debate in Congress has waxed and waned. Efforts by lawmakers to change U.S. gun policies in any significant way have consistently faced roadblocks from Republicans and the influence of outside groups such as the NRA.

Golden State Warriors coach Steve Kerr stormed out of his pregame news conference in Dallas after discussing the need for gun control legislation in the wake of another school shooting.

A year after Sandy Hook, Sens. Joe Manchin a West Virginia Democrat, and Patrick J. Toomey, a Pennsylvania Republican, negotiated a bipartisan proposal to expand the nation’s background check system. But as the measure was close to being brought to the Senate floor for a vote, it became clear it would not get enough votes to clear a 60-vote filibuster hurdle.

Then-President Barack Obama, who had made gun control central to his administration’s goals after the Newtown shooting, called Congress’ failure to act "a pretty shameful day for Washington."

Last year, the House passed two bills to expand background checks on firearms purchases. One bill would have closed a loophole for private and online sales. The other would have extended the background check review period. Both languished in the 50-50 Senate, where Democrats need at least 10 Republican votes to overcome objections from a filibuster.

RELATED: Uvalde, Texas elementary school shooting: How to help, where to donate blood

The Associated Press contributed. This story was reported from Los Angeles.