CHARLESTON, W.Va. - A vaccine clinic at a West Virginia casino is welcoming people from outside of the state to get their COVID-19 shots as demand declines among in-state residents.

"Grateful was what we saw in their eyes," said Betsy Gambino, a nurse with Berkeley Medical Center who helped administer the shots Tuesday.

Without leaving their car, state resident or not, people can get their coronavirus vaccine in a parking garage at the Hollywood Casino at Charles Town Races in the state's Eastern Panhandle. The drive-thru clinic is available to anyone age 16 and older. West Virginia residency is no longer required, according to a statement released by the casino Tuesday. 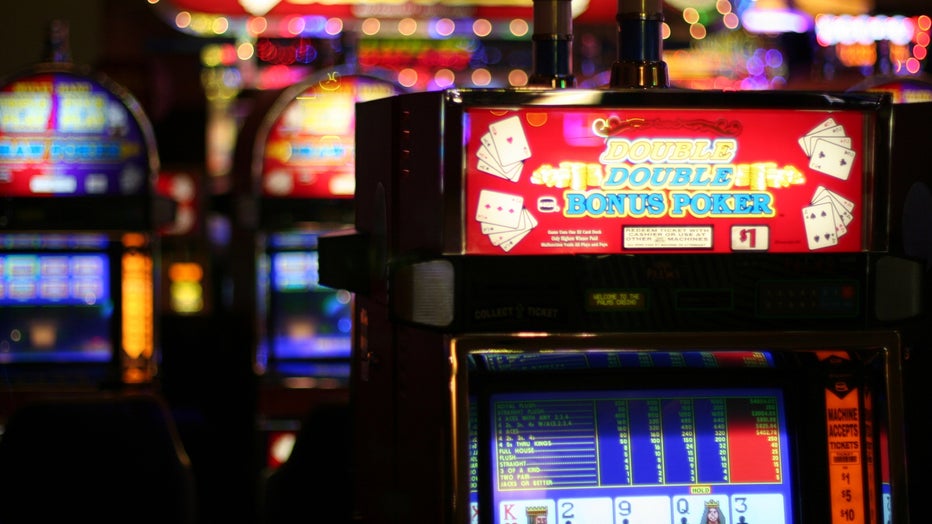 A slot machine at a casino. (FOX TV)

That was news to some state coronavirus response officials who said Wednesday they were unaware of clinics opening to out-of-state residents.

Held in partnership with WVU Medicine, the clinic is being held from 8 a.m. to 8 p.m. every Tuesday and Thursday over the next several weeks. The casino is about an hour’s drive from Washington, D.C, and about 75 miles (121 kilometers) west of Baltimore.

"We know our neighbors in surrounding states are struggling, so we’ve opened our borders to allow them to receive their vaccine," said Donnie Grubb, Berkeley Medical Center's trauma program manager who is overseeing the clinic. "We have the availability to do that."

The clinic is advertised in different places, including a sign that can be seen from heavily traveled Interstate 81. Gambling might be a unique side trip to getting the vaccine, although the clinic’s advertisement does not openly push the facility’s slots and table games.

Gambino said a vaccine database shows residents from six other states arrived Tuesday, including from California, Maryland, New York, Pennsylvania, Tennessee and Virginia, along with the District of Columbia, Puerto Rico and a local worker who hails from Nova Scotia.

The clinic is administering the two-shot Pfizer vaccine. Gambino said a couple traveling back from vacation to Morristown, Tennessee, agreed to return in 28 days to get their second dose.

One Pennsylvania man pulled out an array of official papers to prove who he was, only to be stopped by Gambino.

"I said ‘sir all I need is a photo ID so I know who I’m giving this to.’ And I honestly thought he was going to cry," Gambino said. "Our goal is just to get vaccines in arms. We are just doing our part."

The National Guard is assisting with the clinic. But James Hoyer, a retired major general leading the state’s coronavirus task force, said at a news conference he didn't know that out-of-state residents were being allowed to get vaccines inside the state, other than people who already work in West Virginia.

"Not aware of anything we’ve done to open it up just broadly to anybody that wants to come from another state to get a vaccine, but it is open to those who work in West Virginia who reside in other states," Hoyer said.

The pace of administering vaccines in West Virginia has slowed due to declining demand, and officials have been urging people to step forward to receive vaccines. They say speeding up vaccinations will prevent more infectious and deadly variants of the virus from running rampant.

West Virginia allowed anyone 16 and older to get the vaccine starting last month. About 42% of residents have received at least one coronavirus vaccine dose, while 29% are fully vaccinated, according to state data.

Republican Gov. Jim Justice said the "focus ought to always be on West Virginia first and foremost, but we do have additional vaccine now, and surely we have people traveling back and forth and coming in and out of jobs and stuff like that. We’d like them to be vaccinated."

RELATED: Half of US adults have now received at least one shot of COVID-19 vaccine, CDC says

The county health departments in Berkeley and Jefferson counties last week combined their health clinics into one for the entire Eastern Panhandle. The parking garage clinic has 10,000 available vaccines a week in a two-county region with 176,000 total residents. About 60% of the doses were claimed last week and about 50% are expected to be administered this week, Grubb said.

"That’s our goal, to achieve herd immunity," Grubb said. "If we need to help out our fellow community members across state borders, we are committed to do that."

Preregistration to the clinic is required either online or by calling 304-901-7060.

In North Carolina, out-of-state residents have been allowed to receive their COVID-19 shots there since January, while New Hampshire lifted its residency requirement on Monday.

Casino operators in Las Vegas have been offering the shots to hospitality workers, while officials in Nevada acknowledge that nearly 58,000 people who received coronavirus vaccine shots in the state didn’t provide an in-state address.