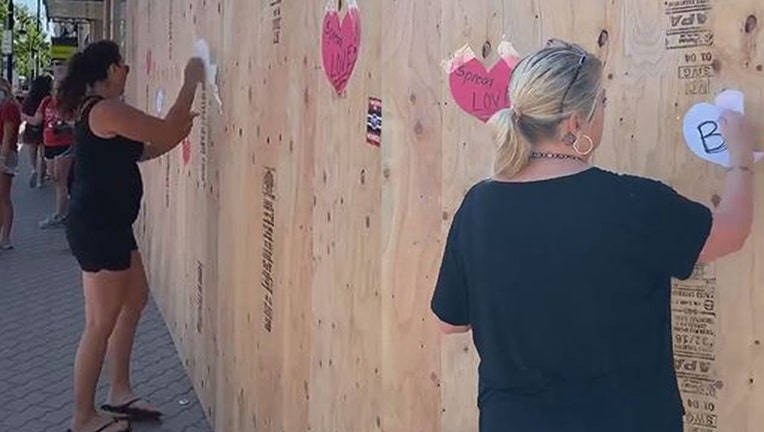 Women Rip Down 'Black Lives Matter' Hearts in Chicago Suburb. (Credit: 365 Things to Do in Naperville, Illinois via Storyful)

CHICAGO - Video streamed on Facebook Live by a community page in a Chicago suburb showed the moment angry residents took the time to rip a series of paper hearts reading “Black Lives Matter!” from a boarded-up storefront. The hearts were posted by a group of teenage girls.

As the unidentified women ripped the signs down from the plywood, the teenage girls who posted them could be seen crying as an elderly man yelled at them, “This is a good city. You want to ruin it!”

Near the end of the video, a girl says, “We’re here to say that there are good people in Naperville who really care about other people. And we support Black Lives Matter.”

The footage was streamed on Facebook Live by the community page “365 Things to Do in Naperville, Illinois,” run by Ann Marie Holland and Ken Tracy. The couple told Storyful they were sitting on a bench nearby, heard the argument, and began filming.

RELATED: ‘I could die from the color of my skin’: Little girl has emotional reaction to George Floyd protests

Alyssa Helm, who identified herself as one of the teenagers in the video, commented on the post on Facebook, saying the confrontation had encouraged her and her friends to put up more of the “Black Lives Matter!” hearts around the neighborhood.

“I’m in this video and am very thankful for the nice people who came and helped. Thank you for recording this and letting us have a voice,” Helm commented on the livestream.

As protests condemning police brutality continued across the country following the death of George Floyd, who died on May 25 when a white Minneapolis police officer pressed his knee on Floyd’s neck, incidents like the one filmed in the Chicago suburb have emerged on social media.

Maryland police are currently searching for a cyclist who attacked a group of people for posting George Floyd flyers in Bethesda on June 1.

Video shows the suspect attempting to grab one of the posters from a little girl before charging the person filming with a bicycle.

RELATED: ‘It is never OK to commit a crime in our honor’: Black protesters confront women vandalizing Starbucks

Storyful contributed to this story. This story was reported from Los Angeles.