Drone footage published shows the Taal volcano eruption in the Philippines on July 2.

LAUREL, Philippines - The Taal Volcano blasted a dark gray plume of steam and ash into the sky for five minutes on Thursday, forcing more than 14,000 people to evacuate from villages near the Philippines capital of Manila.

Footage captured by the Philippine Institute of Volcanology and Seismology showed dark plumes of smoke and ash erupting 200 meters high. The eruption lasted five minutes and triggered four smaller emissions throughout the day.

Volcanologists say it's too early to determine if the unrest will lead to a full-blown eruption, but raised the level of alert to three on a five-level scale. A level three alert means "magma is near or at the surface, and activity could lead to a hazardous eruption in weeks," according to the Philippine Institute of Volcanology and Seismology.

The evacuations involved residents in five high-risk villages that surround Taal, including the towns of Laurel and Agoncillo. The local Philippine government fears emergency shelters may become a breeding ground for COVID-19, but town officials assured residents that the shelters — usually, schools, basketball gymnasiums and church grounds — will not become hotspots.

Laurel resident Imelda Reyes feared for her family’s safety at home near the volcano and in the crowded evacuation center where they took shelter.

"If we stay home, the volcano can explode anytime," Reyes told the Associated Press. "But here, just one sick person can infect all of us. Both are dangerous choices." 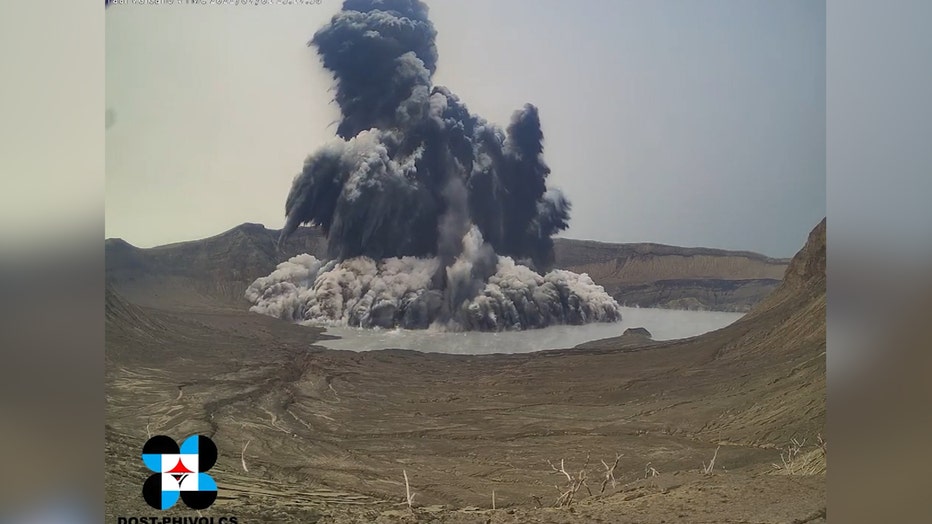 The Taal Volcano blasted a dark gray plume of steam and ash into the sky for five minutes on Thursday. (Philippine Institute of Volcanology and Seismology via Storyful)

A nearby town away from the volcano could accommodate up to 12,000 displaced residents in pre-pandemic times but could only shelter half now.

Agoncillo, a town of more than 40,000 residents, reported more than 170 COVID-19 cases, 11 residents have died and only about a dozen remain ill. The Philippines remains a COVID-19 hotspot with more than 1.3 million confirmed cases.

RELATED: Teenage girl dies after being struck by lightning on Tybee Island

The local government asked residents to stay away from the small island where Taal sits and its surrounding villages, labeling the perimeter a permanent danger zone.

Taal erupted in January last year, displacing hundreds of thousands of people and sent clouds of ash to nearby Manila, forcing Manila’s international airport to temporarily shut down. Last year’s eruption buried an abandoned fishing community on an island in Taal Lake and shut down popular tourist inns, restaurants, spas and wedding venues.

The Philippines lies along the Pacific "Ring of Fire", a region prone to earthquakes and volcanic eruptions. In 1991, a long-dormant volcano, Mount Pinatubo, erupted in one of the biggest volcanic eruptions of the 20th century.