Publix employee surprised by coworkers, learns he will compete in Special Olympics

Publix employees surprised one of their fellow coworkers with the news that he will be heading to the 2022 Special Olympics, where he will compete in the pentathlon.

ST. AUGUSTINE, Fla. - A Publix employee, known for working hard inside the beloved Florida store, appears to be putting that same work ethic outside of it. He recently learned he will be heading to the 2022 Special Olympics and his fellow coworkers wanted to make sure he knew they were proud of him.

In a video, James "JR" Lobinsky, who has been working at a St. Augustine-area Publix for 12 years, was surprised when he exited the store one day. Outside, his peers formed a circle, holding a sign saying he had been selected to compete.

He read the sign aloud, adding, "Oh my goodness."

Lobinsky, who has autism, will be doing a pentathlon, reports FOX 30. It includes an 800-meter run, high jumps, and long jumps.

"We’re really proud of you, man," one of the managers said in the video. "I know you’ve been working hard for this and we wanted to get you a special banner made up for you and have the Publix team recognize you. Good luck, we’ll be rooting for you. Thanks for all your hard work here." 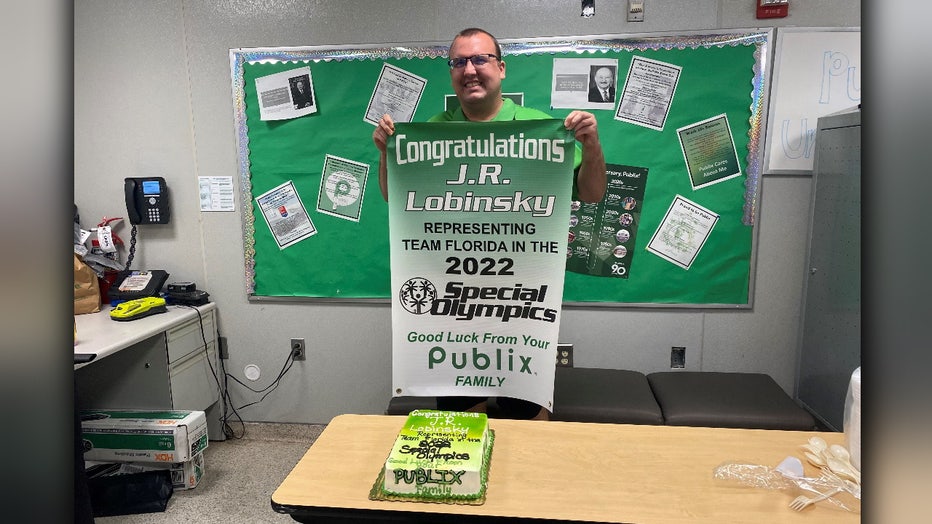 "I’m going to do my absolute best to make you guys all proud in all of this," Lobinsky responded. "Thank you so much."

It wasn’t just a few encouraging words or a banner that made his day. There was even a specially decorated Publix cake to celebrate his achievement too.

"J.R. loves cake," one person could be heard saying in the video.

The Special Olympics will be held in Orlando from June 5 to June 12 at Exploria Stadium. It provides year-round sports training and competition for people with intellectual disabilities who wish to participate.

Lobinsky told FOX 30 that the opportunity will allow him to make new friends and challenge him at the same time.