Meet the ‘Be a Man’ guy and his perfect one-liners

With over 4.5 million followers, the "bostonbeaman" TikTok account has managed to parody the absurd aspects of toxic masculinity, creating a perfect formula for tongue-in-cheek illogical takes on what it means to be a man.

LOS ANGELES - In today’s contentious political climate, you wouldn’t think a social media brand entitled "Be a Man" would be that popular or unifying. But with over 4.5 million followers, the "bostonbeaman" TikTok account has managed to parody the absurd aspects of toxic masculinity, creating a perfect formula for tongue-in-cheek illogical takes on what it means to be a man.

The viral videos feature a 63-year-old man who goes by the name Harmon offering comically ludicrous takes on the male condition like "never have an emergency contact; only rely on yourself. Be a man."

The brainchild of the Boston-based comedy group "Breaking Balls," founded in 2017, the "Be A Man" videos have released hundreds of 10-second clips amassing a behemoth of a following, even starting what Harmon refers to as a movement, in an ever-changing world where gender identity is constantly being questioned.

Harmon had been doing the "Be a Man" skits for the past 3 years, but it wasn’t until 2020, when everyone was cooped up at home during the COVID-19 pandemic lockdowns, craving a sense of humor in a bleak time, when things really took off.

The whole point, Harmon says, is to have a laugh and not take oneself too seriously. So, what are his inspirations?

While you may be wondering if his shtick is an act, the "Be A Man" persona is very much inspired by Harmon’s working-class upbringing.

The son of a hard-working, no-nonsense "angry" mailman from East Boston, Harmon said he and his siblings had to grow up fast. It was necessary in order to make it in a rough neighborhood that he says helped him cultivate his iconic one-liners, many of which were inspired by his father and the people he grew up around.

"I grew up in East Boston right next to Logan Airport. My old man was an angry Italian postal worker," Harmon explained. "My uncles owned a bar, so we spent a lot of time down there, hanging out, learned a lot, we were young and we’d be sitting on the bar with our legs dangling down, drinking a soda just watching the whole world go by," Harmon recalled in an interview with FOX TV Stations on July 7. 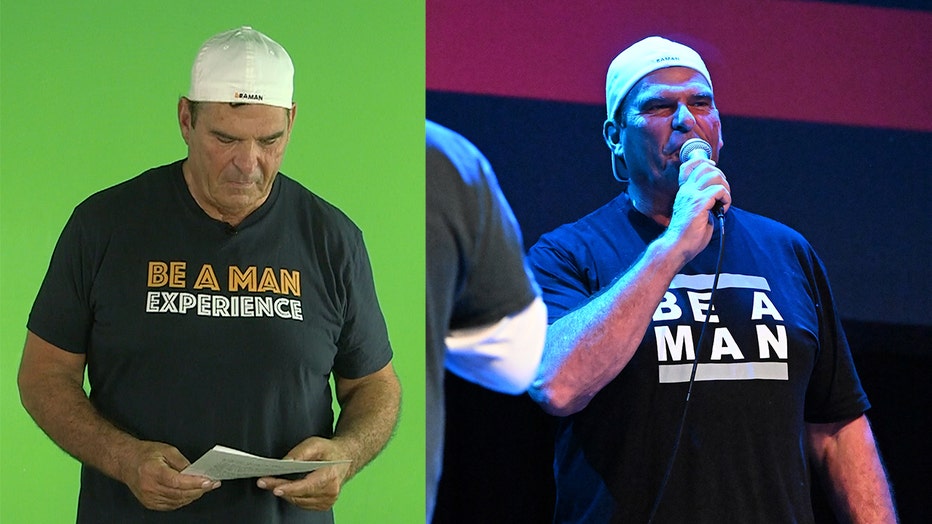 Harmon had been doing the “Be a Man” skits for the past 3 years, but it wasn’t until 2020 when things kicked off.

Fast-forward to his adult life, Harmon now works as a mortgage broker as his day job but making people laugh is clearly a passion.

He explained that once he started getting involved with the Breaking Balls comedy group, which includes one of his brothers, they found incredible material in Harmon’s sarcastic tone-deaf humor, which became the "Be a Man" guy.

By the time Harmon amassed internet fame, he didn’t even know what TikTok was. He says his daughters knew he was viral before he did. Harmon says he owes credit to the Breaking Balls comedy team, saying they worked to study the platform’s algorithm to help him become viral, despite not actually knowing what an algorithm is.

"Don’t know what algorithms mean; be a man," Harmon laughed.

Harmon says the jokes started out very serious but as he gained popularity, they became more and more ridiculous.

"It started out very serious, like ‘pay your child support; be a man. Don’t abuse your animals; be a man,’ stuff like that and then I started throwing funnier ones in." Funny ones like "Go smell your dogs a**; be a man."

Other hilarious examples include:

All jokes aside, this self-deprecating humor has actually managed to find its way into the ears and hearts of some fairly vulnerable listeners.

Harmon says he has received countless letters from fans many of who have said the accounts have helped them reconnect with their fathers helping them find common ground in comedy. Others who have suffered from depression and mental health say the videos have helped them escape a black hole of depression that prevented them from committing suicide.

"People have reconnected with family members, I hear a lot about guys reconnecting with their fathers, they watch them together forming a more common bond with them," Harmon said. "We’ve had people say they were suicidal and they watch our stuff and it gets them out of it."

So what does it mean to actually be a man? For Harmon, it’s simple.

"I could write all 10 commandments, but basically: Do the right thing, act normal, like if you meet a girl for the first time keep your f* **** hands off her," Harmon proclaimed. "Be loyal, take care of friends and family, and never forget where you came from."