Saturday morning, Windsor police and other law enforcement groups began moving demonstrators from access points to the international border. The operations have been peaceful

Operations commenced around 8 a.m., police said. So far, removal of the protesters has been peaceful.

"The Windsor Police & its policing partners have commenced enforcement at and near the Ambassador Bridge," wrote the department in an online post. "We urge all demonstrators to act lawfully & peacefully."

"Commuters are still being asked to avoid the areas affected by the demonstrations at this time."

Tents with tables that previously had piles of food on them were being packed up as police moved through the area. A truck disparaging the Canadian Prime Minister could be seen leaving in a video posted online.

"We're staying here for our rights, we're not just walking out of here after this," said one demonstrator, who advised that things would remain peaceful. "We've gone around and policed ourselves. We've said there's no way anybody intends to get violent."

"It'll be peaceful. We're Canadians, we're not going to fight the police," another protester said.

Windsor police began removing protesters in violation of an injunction ordered by a judge Saturday morning due to their blockage of the Ambassador Bridge.

Police were aided by drones and other tactical units.

The removal operation is the latest evolution in a disruptive week that saw traffic and trade across international border grind to a halt, stirring discontent among businesses. The consternation at the border began in the beginning of the week as a result of truck drivers and other Canadian workers upset with the country's COVID-19 vaccine mandate.

After repeated attempts to negotiate with the demonstrators to clear access across the bridge failed, Premier Doug Ford said fines and jail time would be levied against demonstrators who continued to block traffic. 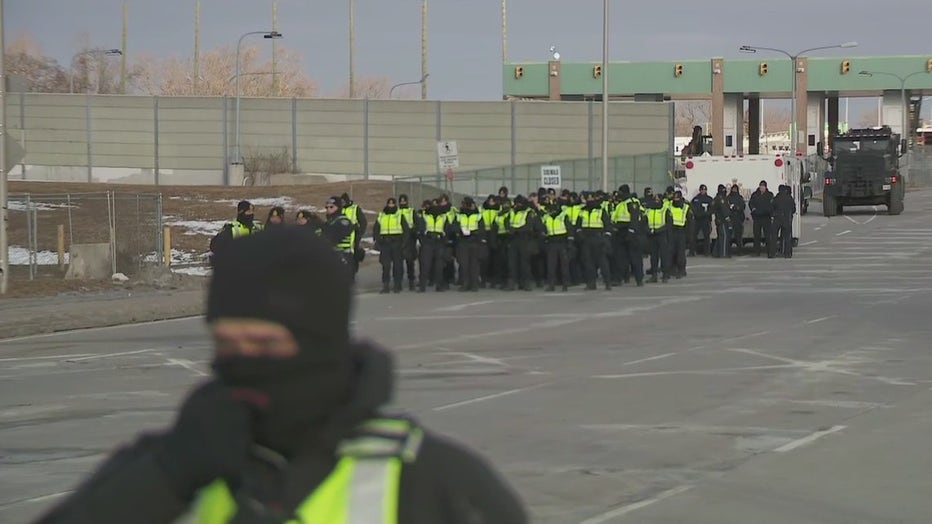 Windsor Mayor Drew Dilkens and the Automotive Parts Manufacturers' Association sought a court injunction against the demonstrators on Friday as well. Despite its approval, the protesters remained.

But in the hours following the court order, protesters remained.

The ratcheting up of enforcement protocols to forced removal followed days of pressure building from U.S. President Joe Biden, Michigan Gov. Gretchen Whitmer, and the automotive companies that rely on easy passage between the two countries.

Prime Minister Justin Trudeau said he spoke with Biden and the two agreed the blockades could not continue. The demonstration had spawned other smaller blockades at other ports between the two countries.

During interviews this week, Dilkens said he risked inflaming tensions and broadening the demonstration if law enforcement came down too heavy-handed. Instead, negotiations and peaceful removal would be vital.