Woman loses control of her car in Phoenix crash, sending it in circles

The driver of a Toyota 4-Runner jumped from her car during a Phoenix crash because it lost control, going in circles until emergency crews were able to regain control.

PHOENIX - A woman was driving in Central Phoenix on Aug. 4 when she was struck, but it wasn't your typical crash.

The woman was forced to jump out of her car as it began spinning out of control.

Izabella Weathersbee is the driver of the Toyota 4-Runner and says initially she was making a left on 7th Avenue near Glendale Avenue yielding for oncoming cars but the light turned red.

"Light goes red and I'm in the intersection and so I need to move and I turn and that's when the guy comes up and we crash," she explained.

Weathersbee says that's when she literally lost control of her car.

"My fender dug into one of my tires and so my tire was turned and so I couldn't turn my wheel back," she said. 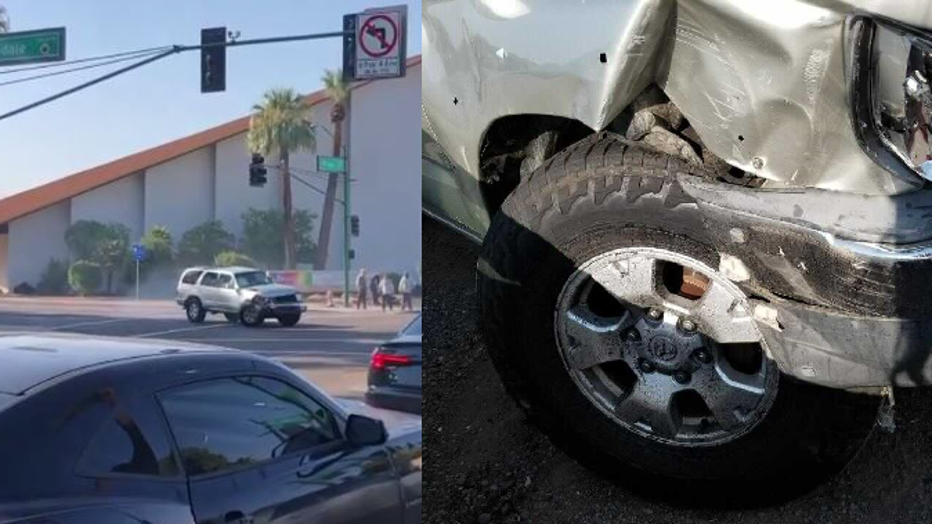 She says her brake and emergency brake did not work. Meanwhile, her car was spinning and she began to see smoke.

"The only thought in my brain was, ‘You gotta get out of this car.’ So I push the door open, I get my seat belt off and I jump out of the car," Weathersbee said.

Moments later while on the ground, Weathersbee says she felt her own car run over her back. She got up and ran to a nearby church to call for help.

Her injuries are not too serious, besides the road rashes on her legs. She says she feels pain in her back and knees.

As for her car? It's totaled, she said.

The 20-year-old student now doesn't have her own transportation as she returns to school at Northern Arizona University.

For now, she's relieved she's OK but is a bit traumatized by the crash.

"… In a way that like could have been way worse. It's a terrifying thought," Weathersbee said, adding that she's thankful for everyone checking in on her.

The specific cause of how the car lost control is unknown.

To help Weathersbee in her time of need, visit this link to donate to her GoFundMe.

FULL VIDEO: Phoenix woman loses control of car after crash as it spins in circles