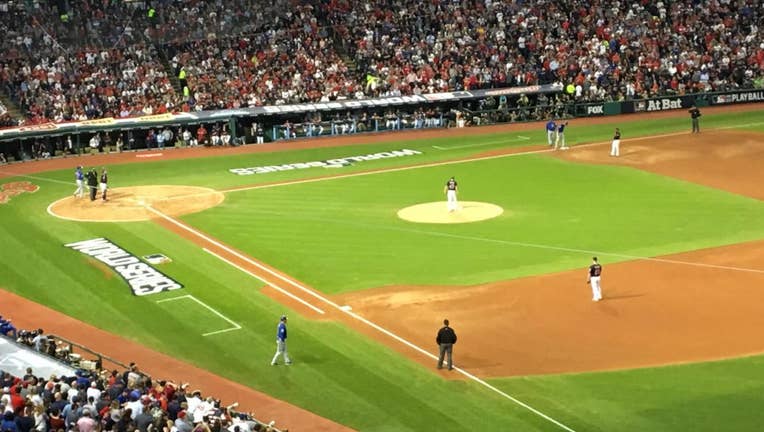 CLEVELAND (AP) -- Joe Maddon didn't need to give Jake Arrieta any sort of pep talk before Game 6 of the World Series.

The stakes were obvious. So was the weight of history. Who better to trust with a season in the balance than the pitcher whose rebirth in Chicago has come in lockstep with the club's rise from cuddly also-rans to blossoming juggernaut?

"I think Jake likes to shoulder these kind of moments," Maddon said a couple of hours before Arrieta's first pitch against the Cleveland Indians on Tuesday night.

And own them too.

Given an early boost by Chicago's suddenly hot again offense, Arrieta kept the Indians in check for 5 2/3 innings as the Cubs forced a Game 7 with a largely drama free 9-3 victory.

Arrieta struck out nine and walked three to improve to 2-0 in the World Series. In Game 2, he kept the Indians hitless into the sixth to send the Cubs back to Chicago with things all tied up. In Game 6, he didn't let Addison Russell's record-tying six RBIs go to waste. By the time the Indians managed their first hit -- a double by Jason Kipnis leading off the fourth -- the Cubs were already up seven runs.

The only real tense moment came after Kipnis scored on Mike Napoli's RBI single with one out in the fourth. Arrieta hit Lonnie Chisenhall with a pitch and walked Coco Crisp to load the bases.

Just as it appeared Arrieta was on the brink of letting the Indians back in it, he recovered. When Tyler Naquin swung and missed on a 1-2 pitch, the Cubs were out of danger and on their way.

It's those bouts of temporary wildness that's taken just a bit off the edge that made Arrieta so unhittable during his Cy Young winning run in 2015, when he practically carried Chicago's pitching staff in the second half as the Cubs locked down a playoff spot and eventually made it all the way to the NLCS before falling to the New York Mets.

Arrieta's 16 wild pitches led the National League and his 76 walks marked a career high during a year in which he went 18-8 with a 3.10 ERA and made the All-Star team. It's a great season by just about any measure, except when the measure is Arreita's 2015 when he led the majors in wins (22), ERA (1.77) and shutouts (three).

That nearly yearlong stretch of dominance ended after the All-Star break. He went just 6-4 over the season's final 10 weeks and his ERA in September was a mediocre 4.68. His two starts before the World Series were both Chicago losses, one to San Francisco in the Division Series in which he pitched well and another to the Los Angeles Dodgers in which he did not.

Arrieta saw his spot as the team's ace vanish too with Jon Lester getting the nod in Game 1 of the World Series and Kyle Hendricks -- who will start Game 7 -- leading the majors with a 2.13 ERA.

Yet the prospect of living up to the outsize expectations Arrieta set for himself hardly seem to bother him. He spent Monday taking his two kids trick-or-treating. A day later, he looked at ease silencing the non-Cubs portion of Progressive Field. The only Indian he struggled with in the Series was Kipnis, who went 3 for 5 against him. The rest of the Indians combined to go 2 for 34.

By the time Maddon came out to take the ball from Arrieta following a two-out walk in the sixth, the loud Chicago contingent behind the Cubs dugout gave him a rousing ovation.

The dream of ending a championship drought that extends back more than a century is very much alive thanks in part to the well-bearded right-hander who makes up for in tenacity what he sometimes lacks in polish. Just like his team.