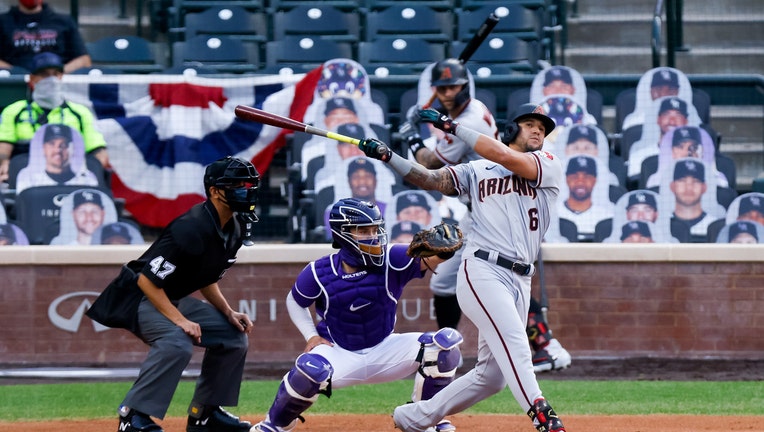 David Peralta #6 of the Arizona Diamondbacks bats during the first inning against the Colorado Rockies at Coors Field on August 10, 2020 in Denver, Colorado. (Photo by Justin Edmonds/Getty Images)

DENVER - Kole Calhoun homered and had a two-run double to lead Arizona’s 18-hit outburst, and the Diamondbacks beat the Colorado Rockies 12-8 on Monday night.

David Peralta and Ketel Marte got four hits each for Arizona, which finished with 13 singles.

Alex Young (1-0) worked two innings of relief for the win. Archie Bradley entered in the ninth with the bases loaded and allowed just one run, earning his fourth save.

The teams combined for 15 runs and 21 hits through five innings at Coors Field, chasing both starters before the end of the fourth.

“This is a great place to hit. I think that’s not a secret. It feels like it’s going to be a slugfest no matter what,” said Calhoun, who hit his home run to the opposite field. “It’s nice to see everybody keep swinging it and keep putting up crooked numbers.”

Rockies outfielder Charlie Blackmon continued his torrid start with four singles to extend his hitting streak to 14 games. He has 10 multi-hit games in that stretch, including the last five to raise his batting average to .484, tops in the majors.

“It’s so early into this thing, you can’t weigh things unless you’re Charlie Blackmon, who’s got 30 hits when some guys don’t have 30 at-bats,” Calhoun said.

“He’s just unbelievable. He’s probably the best hitter I’ve ever played with,” said teammate Nolan Arenado, who also had four hits. “These guys are tough lefties and for Charlie to have the at-bats that he has, it’s fun to watch. The zone you dream of is what he’s in right now. I’m trying to learn something from him.”

Calhoun set the tone with a leadoff homer against Jon Gray (0-2) and added a two-run double in a three-run seventh that gave Arizona a four-run lead. The Diamondbacks had three innings in which they scored three runs, and they never trailed.

Colorado stayed close by answering every rally until the seventh. The Rockies scored a run in the first, two in the third and three in the fourth to chase starter Robbie Ray, who lasted just 3 2/3 innings.

“You can’t take anything for granted with this ballpark,” Diamondbacks manager Torey Lovullo said. “With the way the ball jets out of here, you’ve got to be extremely careful how you manage the lineup and I thought our bullpen did a tremendous job.”

Owings’ second home run of the season — against his former team — cut the lead to 8-7 in the fifth. Marte’s single in the ninth gave Arizona a five-run cushion.

Diamondbacks: Placed LHP Madison Bumgarner on the 10-day injured list with a mid-back strain. Bumgarner left Sunday’s game at San Diego after two innings due to back spasms.

Colorado’s starting staff was a strength when the team went to the postseason in 2018. Last year things went sideways, especially for lefty Kyle Freeland, who endured a 3-11 campaign after finishing fourth in NL Cy Young Award voting the year before.

The starters are back to being a strength for the Rockies, but it’s not a surprise to Black.

“Last year was tough for starters and relievers,” Black said. “Their personal expectation was they would bounce back, and that was my expectation. I’ve seen them pitch well and make adjustments.”