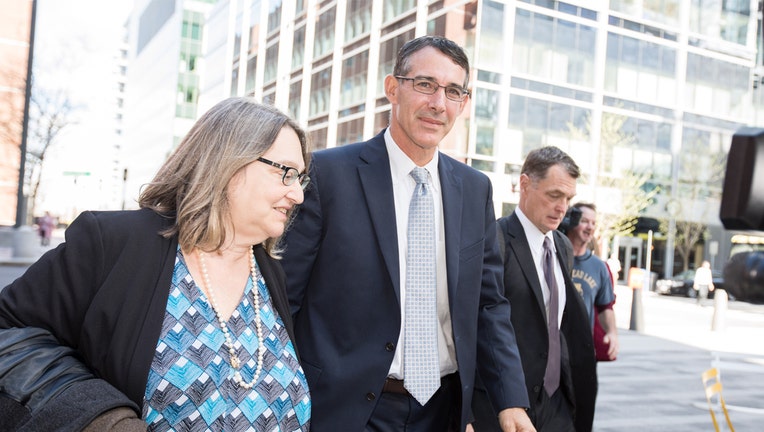 BOSTON (AP) - The former men's tennis coach at the University of Texas at Austin pleaded guilty Wednesday to accepting a $100,000 bribe in the widespread college admissions bribery scheme and will cooperate with authorities.

Michael Center, 55, is the third coach to plead guilty in the high-profile case that has also ensnared wealthy parents, including executives and Hollywood actresses, across the country.

The scandal has put a spotlight on the cutthroat college admissions process and amplified complaints that the system is rigged in favor of the rich. The parents are charged with paying big money to doctor entrance exam scores or get their children admitted to highly selective schools as athletic recruits for sports they didn't play.

Authorities say the admissions consultant at the center of the scam, Rick Singer, paid Center to help an applicant get admitted as a tennis recruit.

In 2015, Singer gave Center $40,000 in donations the school's tennis program and later flew to Austin, where he gave the coach about $60,000 in cash for himself, Assistant U.S. Attorney Eric Rosen said.

Around the same time the student started classes, he withdrew from the tennis team.

Center looked down at his hands on the table in front of him as the prosecutor read the allegations against him. Rosen revealed that Center has also entered into a cooperation agreement with the government in the hopes of getting a lighter sentence.

Thirteen of the 33 parents charged in the case agreed earlier this month to plead guilty, including "Desperate Housewives" star Felicity Huffman. Huffman, who was charged with paying $15,000 to have someone boost her daughter's SAT score, will plead guilty May 21.

Prosecutors have said they will seek between four and 10 months in prison for Huffman.

On Tuesday, another parent and a former University of Southern California coach said they will also plead guilty.

Laura Janke, who was assistant women's soccer coach at USC, created bogus athletic profiles that portrayed the applicants as star athletes for sports they didn't play, prosecutors said. She is also cooperating with authorities and could testify against defendants at trials, if asked.

Parents continuing to fight the charges include Lori Loughlin, who played Aunt Becky on the sitcom "Full House," and Loughlin's fashion designer husband, Mossimo Giannulli. They are accused of paying $500,000 in bribes to get their daughters into the University of Southern California.

Loughlin and Giannulli pleaded not guilty to money laundering and mail fraud conspiracy charges and haven't publicly commented on the allegations.

Former coaches at Yale and Stanford have already pleaded guilty.

Coaches, others in college admissions scam plead not guilty