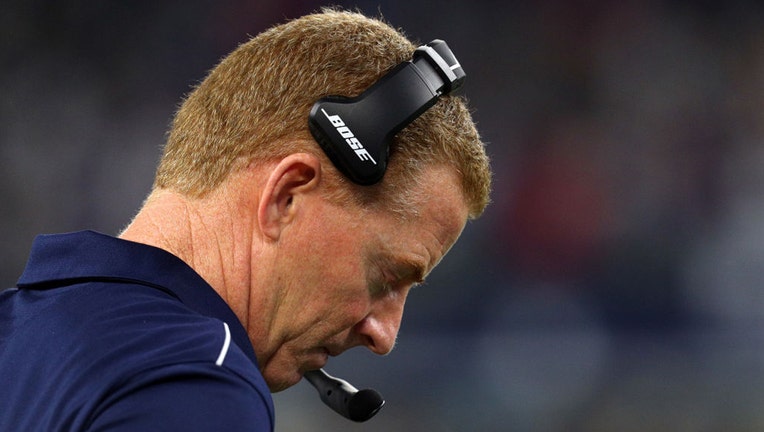 ARLINGTON, TEXAS: Dallas Cowboys head coach Jason Garrett stands on the sideline in the fourth quarter of a game against the Buffalo Bills at AT&T Stadium on November 28, 2019. (Photo by Richard Rodriguez/Getty Images)

DALLAS - The Dallas Cowboys have finally made it official. They are moving on without head coach Jason Garrett.

Garrett took over when Wade Phillips was fired halfway through the 2010 season and served as the Cowboys’ head coach for nine and a half seasons – the second-longest tenure with the franchise behind Tom Landry’s 29 years.

His record ended up being 87-70, including the playoffs. The team won just two playoff games and lost three during his tenure.

When you’re leading America’s team, that kind of record in the post season is just not enough to satisfy the legions of Cowboys fans or the owner.

Garrett’s contract was set to expire next week. Jerry Jones made the announcement Sunday that it would not be renewed.

“We are extremely grateful to Jason Garrett for his more than 20 years of service to the Dallas Cowboys as a player, assistant coach and head coach. His level of commitment, character and dedication to this organization has been outstanding at every stage of his career,” Jones said in a statement. “Jason Garrett’s legacy with the Dallas Cowboys will always be that of someone who strived for greatness every day that he walked through the door, and as someone who instilled the virtues of enthusiasm, hard work and appreciation for the profession in all of the men who played with him and for him.”

The Dallas Cowboys are looking for a new head coach after finally announcing they will not extend Jason Garrett's contract. FOX 4 Sport's Mike Doocy talked to Hall of Famer Troy Aikman about the change and how it reflects on the team. He's disappointed.

“I understand the hard side of the business of football. That’s something you get used to. I think a lot of people forget. As a fan, it’s east to be frustrated with the results, and there’s some merit to the concerns the fan base has had. But these are people, and they are good people,” he said.

Garrett’s departure was something a lot of fans had been calling for.

The ones FOX 4 spoke to Sunday night were nearly unanimous in declaring it was time for the team to adopt a new direction.

“I don’t think Garrett should have lasted this long. But I also think he’s in the family with Jerry Jones. And I think they were scared to release him,” said Christopher Geigger, a Cowboys fan.

“It maybe could have happened a couple of years ago. But with what we had on the field this year, it was worth giving him a shot. If he couldn’t do with this team, maybe he can’t do it,” added James Disney, another fan.

Several Cowboys players responded to the news on Twitter.

“After coming from a place where I was labeled as a ‘practice squad player,’ Coach Garrett told me I was the right guy for the team and is what this team is all about and they needed me. For that, I’m forever grateful. Thanks coach,” said defensive tackle Antwuan Woods.

“He’s the one that brought me in and believed in me,” said cornerback Jourdan Lewis.

Former Cowboys receiver Dez Bryant said he was happy about it, saying he has no sympathy for Garrett and that the Cowboys are now contenders.

The Cowboys did hold interviews with two head coaching candidates this weekend.

When Mike McCarthy was the head coach of the Green Bay Packers, his team eliminated the Cowboys from the playoffs twice. The other candidate is former Cincinnati Bengals head coach Marvin Lewis.

But Johnson said he expects the head coaching search to be very extensive – from the college ranks and the NFL, including some up and coming assistant coaches in the league.