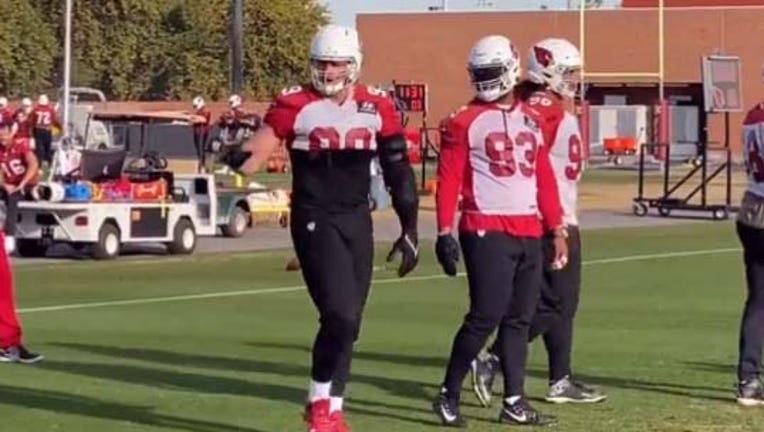 TEMPE, Ariz. - The Arizona Cardinals are a team in desperate need of a spark, stumbling into the playoffs with a 1-4 mark over the past five games.

J.J. Watt and his bionic left shoulder might be able to provide it.

The three-time NFL Defensive Player of the Year is trying to complete an unlikely comeback from a serious shoulder injury in an effort to help the Cardinals’ defense when they travel to face the Los Angeles Rams on Monday night in the wild-card round.

"The only thing that matters to me is being out there for my teammates, trying to help us win a game and get to the end goal," Watt said Wednesday. "That’s all this is about. I’m not doing all this work and not trying to come back in half the time for no reason."

The idea Watt could return seemed absurd in late October. The injury was reportedly serious and the 11-year veteran confirmed most of the details Wednesday, including a dislocated shoulder, torn rotator cuff, torn labrum and capsule. He also dislocated his biceps tendon and had surgery on Nov. 3.

Doctors told Watt a normal expectation for a return was four to six months. A little over two months later, he could be back.

There are no guarantees he’ll actually be on the field against the Rams. He has tested the shoulder against offensive linemen in simulated situations, but a real practice Thursday is the next step.

"It’s been a lot of work, it’s been a lot of time put in by a lot of people that I’m very thankful for," Watt said. "And I’m just looking forward to getting out there, seeing how it goes, and help this team get to where it wants to go."

Cardinals coach Kliff Kingsbury has said several times how impressive it was to see Watt attack his comeback bid. The 6-foot-5, 288-pound defensive end was at some practices over the past few weeks, doing conditioning work to stay in shape.

Kingsbury — like everyone else — doesn’t know what to expect. But he’d obviously welcome Watt back onto the field.

"I don’t have a feel either way," Kingsbury said. "It’s been a while since he’s been out there, and I don’t want to get ahead of ourselves. He’s done everything he possibly can, like I said. Weight room, training room, there’s nothing left for him to do in there, so it was time to progress out on the field."

Watt was injured in Arizona’s 31-5 win on Oct. 24 over the Houston Texans, which pushed the Cardinals to 7-0 for the season. Since he has been sidelined, the Cardinals haven’t looked like the same team with a 4-6 record, and it has taken some of the excitement out of the team’s first appearance in the postseason since 2015.

Arizona’s fade isn’t just because of Watt’s absence. The Cardinals have certainly had other issues: Star receiver DeAndre Hopkins is out with a knee injury. They’ve also struggled with ill-timed penalties and stopping the run.

In 2019, he tore his pectoral muscle when he was with the Texans and missed the final eight regular-season games. He returned for the playoffs and helped the Texans rally from a 16-0 deficit to beat the Buffalo Bills 22-19 in the wild-card round.

"Those are the things you come back for and that’s why you play the game, for those moments," Watt said.

Watt’s hoping for another one Monday.

The Cardinals have mostly struggled since his injury, but the defensive end said the beauty of the playoffs is it doesn’t matter anymore.

"You can leave the last two months behind," Watt said. "Now we go to work."