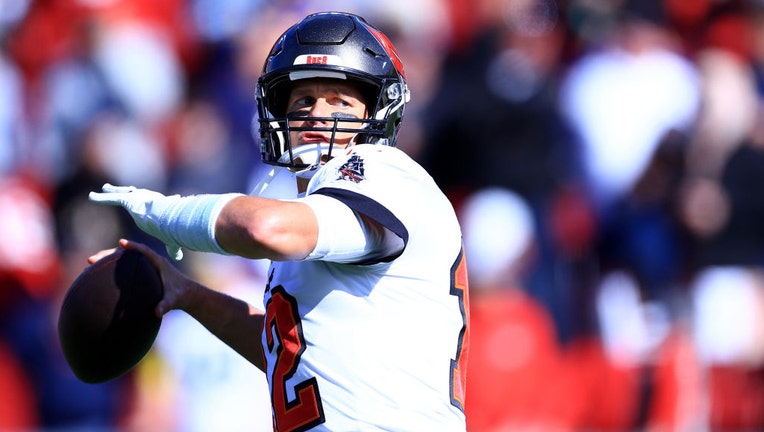 Tom Brady of the Tampa Bay Buccaneers warms up before game against the Los Angeles Rams in the NFC Divisional Playoffs. (Photo by Mike Ehrmann/Getty Images)

WASHINGTON - Tampa Buccaneers quarterback Tom Brady officially announced his retirement from the NFL Tuesday. Brady posted a photo of himself in his Bucs jersey and several messages on social media stating in part he’s not going to make the "competitive commitment anymore" and that he has loved his NFL career and "now it is time to focus my time and energy on other things that require my attention."

In his social media posts, Brady thanked his Bucs teammates, Bucs fans, the City of Tampa, the Glazer Family, Bucs general manager Jason Licht, head coach Bruce Arians and the Bucs coaches and staff, his trainer Alex Guerrero, and his agents and his family.

But the future Hall of Famer did not mention the New England Patriots organization, specifically head coach Bill Belichick or owner Robert Kraft in his announcement.

The seven-time Super Bowl champion had discussed the possibility of retirement and said in part that family would factor into his decision.

ESPN first reported Brady’s retirement on Saturday, citing unidentified sources. Brady’s company posted a tweet indicating he’s retiring, and reaction came from around the world congratulating Brady on his career. But the tweet was later deleted, and Brady’s agent, Don Yee, said the 44-year-old quarterback would be the only person to accurately express his future.

With the news about Brady retiring, there was social media reaction across the sports world.

The New England Patriots thanked Brady for his contributions to the franchise on their official Twitter page.

Kraft released a statement that read in part:

"Words cannot describe the feelings I have for Tom Brady, nor adequately express the gratitude my family, the New England Patriots and our fans have for Tom for all he did during his career."

The organization tweeted "It was quite the ride. Thank you and congratulations, @TomBrady."

"Tom Brady will be remembered as one of the greatest to ever play in the NFL. An incredible competitor and leader, his stellar career is remarkable for its longevity but also for the sustained excellence he displayed year after year."

Kansas City Chiefs quarterback Patrick Mahomes posted a goat emoji acknowledging Brady as the G.O.A.T., the Greatest of All Time.

"With the news of @TomBrady’s retirement today, he would first be eligible for the Hall of Fame in 2027."

Buccaneers linebacker Devin White won a Super Bowl with Brady last season and congratulated him on an illustrious career:

"Congrats to the greatest QB to ever lace em up on a helluva career@TomBrady#LFG."

"Congratulations to TB12 on arguably the finest career an athlete in any sport has ever achieved! You're leaving on top! All the best on your next journey! See you in Canton, @TomBrady!"

"Greatest of All Time. Without a shadow of a doubt. Enjoy the next chapter @TomBrady."

"I truly believe Tom Brady isn’t done playing football. The urge to want to more it’s going to drive him insane. So what’s next for "me" is all you know. I think he will relax for a few days or weeks but his mind of an ultimate competitor will soon speak to him again."

"Behind the cameras TB is the hardest worker I ever seen. The ridiculously most competitive player who set the tone every single practice. A great teammate who took time and got to know everyone on the roster & BY Far the most prepared and toughest player you ever have to play against. I saw it from both sides. Thank you @tombrady."

"Feels like time just stopped for a sec... Congratulations on an outstanding career @TomBrady. Last of a dying breed. #Respect."

"An absolute honor to share this field with you through so many battles! Enjoy retirement @TomBrady #AllDay."

"Tom Brady should be eligible to go into the Hall of Fame THIS YEAR. That’s how great he was. No doubt the greatest of all time."