LOS ANGELES - While much of the U.S. has enjoyed an early taste of spring this week, the West Coast is taking it one step further as a rare February heat wave places dozens of record-high temperatures in jeopardy through Super Bowl Sunday.

A strong dome of high pressure has parked itself over the West, setting the stage for a prolonged stretch of warm and dry weather with the jet stream remaining well to the north in Canada. This setup will direct any significant storm systems away from the West Coast for the foreseeable future.

Temperatures will run 10 to 25 degrees higher than average for this time of year through the weekend from California to southern Oregon. 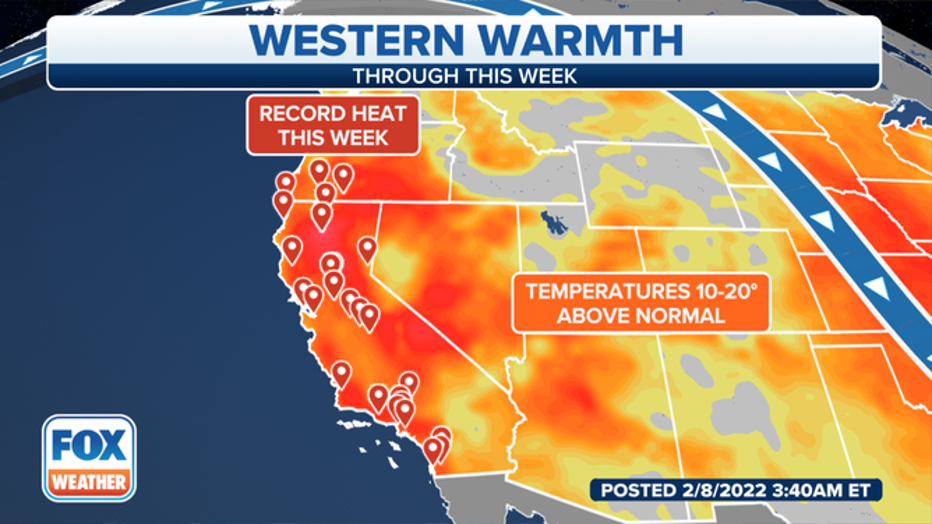 The warmest temperatures will be focused in Southern California, where afternoon highs will generally range from 85 to 90 degrees through Sunday. Some locations may top 90 degrees. For comparison, the average high in downtown Los Angeles on Feb. 11 is only 68 degrees.

Due to these unusually hot temperatures for February, the National Weather Service has posted a Heat Advisory effective until 6 p.m. Sunday for portions of Southern California, including the Los Angeles and San Diego metro areas.

This marks the first time, in records dating to 2006, that the NWS office in Los Angeles has issued a Heat Advisory during the month of February.

"The vast majority of heat watches and warnings that are issued for Central and Southern California are issued from May through October, so a February warning is anomalous," NWS Los Angeles said in a tweet. 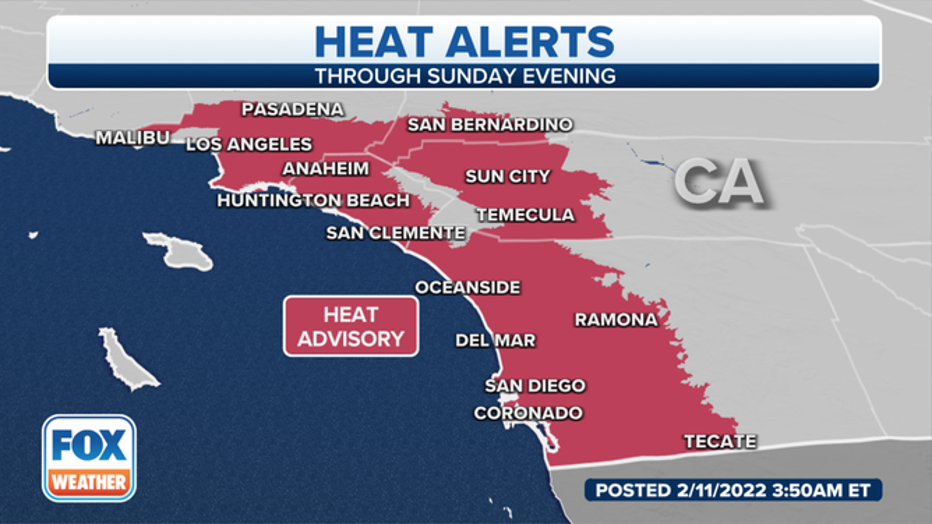 More than four-dozen additional record highs could be tied or broken from California to southern Oregon through Sunday.

Numerous records have already been set across the Golden State each day since Wednesday. Select record highs from Thursday are shown in the tables below. 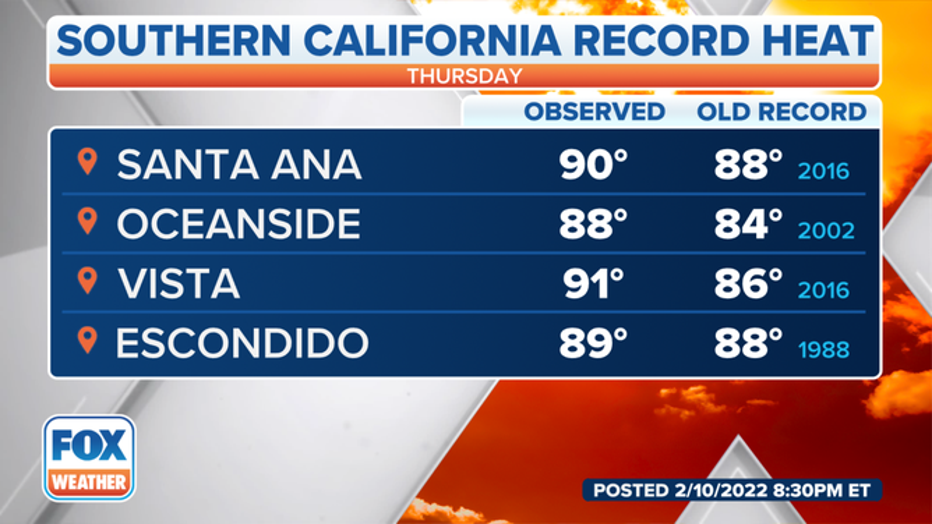 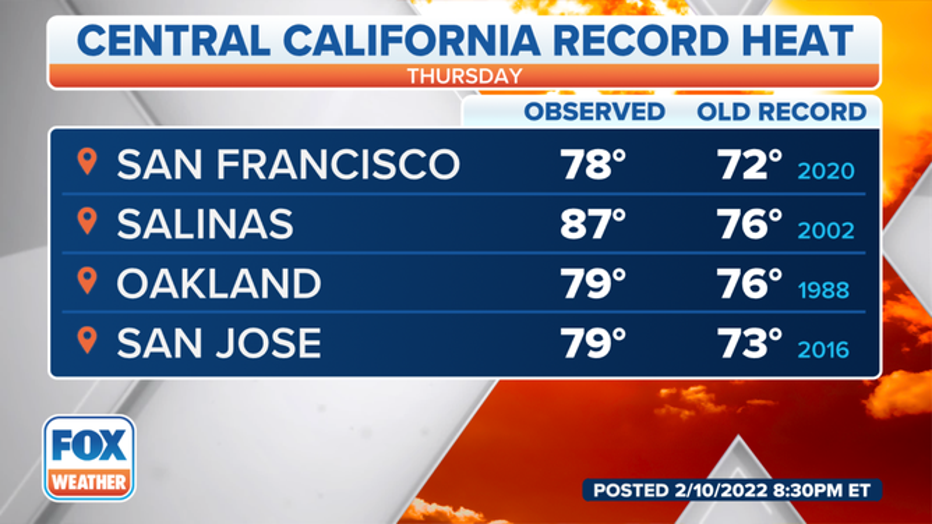 Both San Francisco (78 degrees) and Salinas, California (87 degrees), not only broke their daily record highs Thursday, but they also set new records for the all-time warmest February day. The previous monthly records were 77 and 85, respectively.

Thursday's record-breaking temperatures also stretched northward into southern Oregon, where Medford topped out at 70 degrees and eclipsed its previous Feb. 10 record of 69 set in 2006. 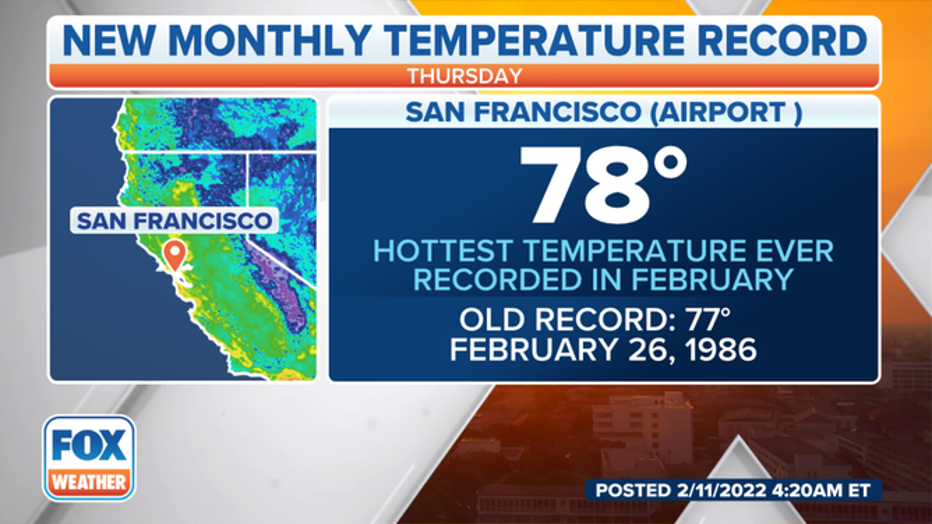 On Friday, more than a dozen records could fall from Southern California and northward along the coast to the San Joaquin and Sacramento valleys and into southern Oregon.

Sacramento and San Diego are predicted to tie their daily record highs, but Los Angeles might come up a few degrees short of its 88-degree record. Medford, Oregon, is forecast to challenge its record high of 69 degrees once again. 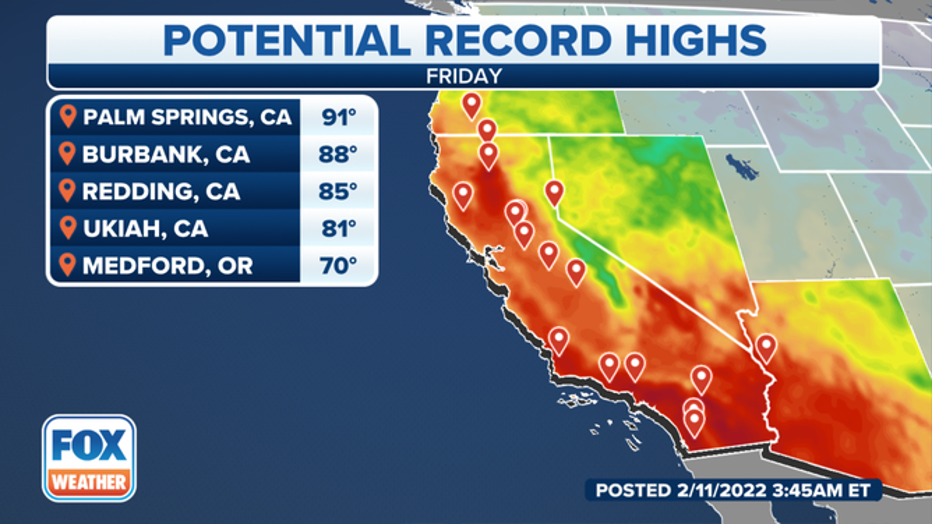 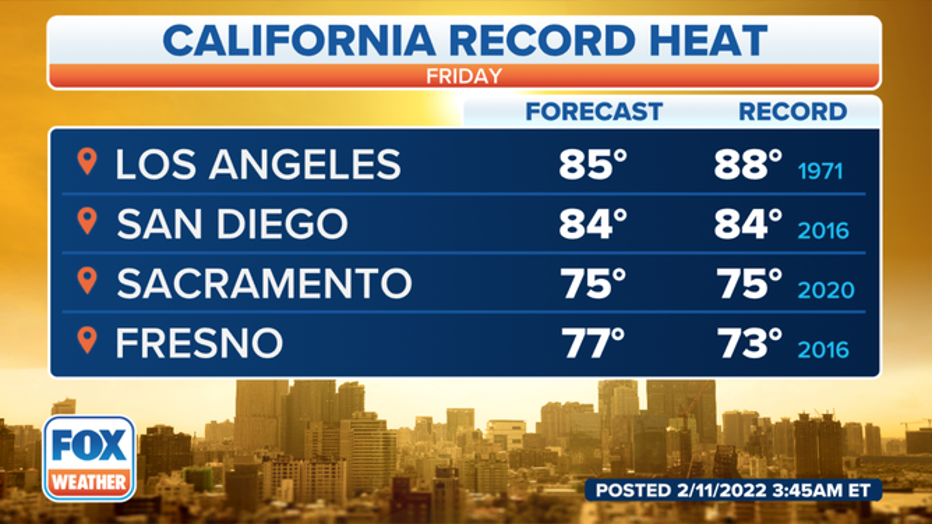 The unseasonably hot temperatures will continue into the weekend along the West Coast.

Record heat could be the most widespread on Saturday when more than two-dozen daily records are in jeopardy, including in the California cities of Fresno, Redding, Sacramento and San Jose. The record high of 70 degrees in Medford, Oregon, will also be within reach.

WHY 50 DEGREES FEELS FRIGID TO SOME BUT WARM TO OTHERS: THE SCIENCE OF ACCLIMATION 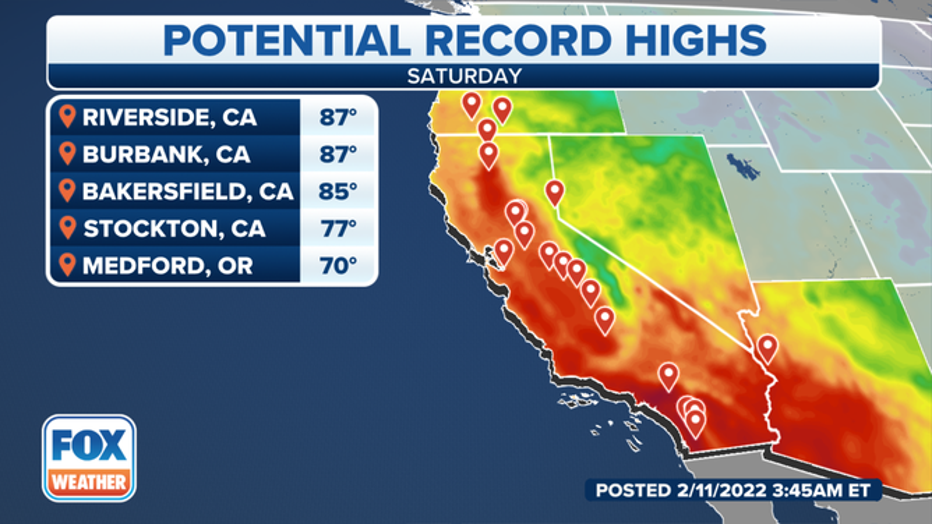 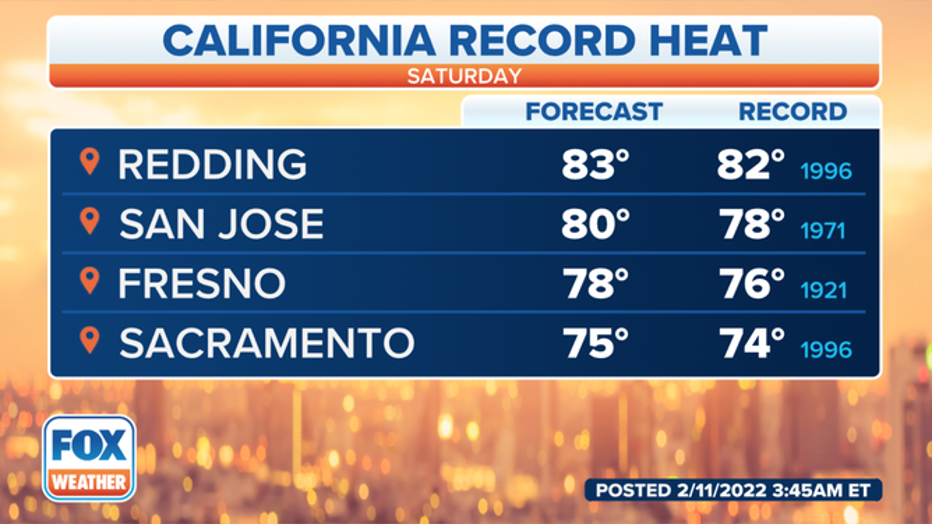 Temperatures will remain very warm on Sunday, placing more than a dozen additional record highs at risk of being tied or broken. This includes the California cities of Sacramento, San Francisco and San Jose.

Los Angeles International Airport – only 4 miles from SoFi Stadium – could also break its daily record high of 85 degrees on Super Bowl Sunday. The hottest Super Bowl on record had a kickoff temperature of 84 degrees inside the L.A. Memorial Coliseum on Jan. 14, 1973, so Sunday's Big Game might challenge that record. 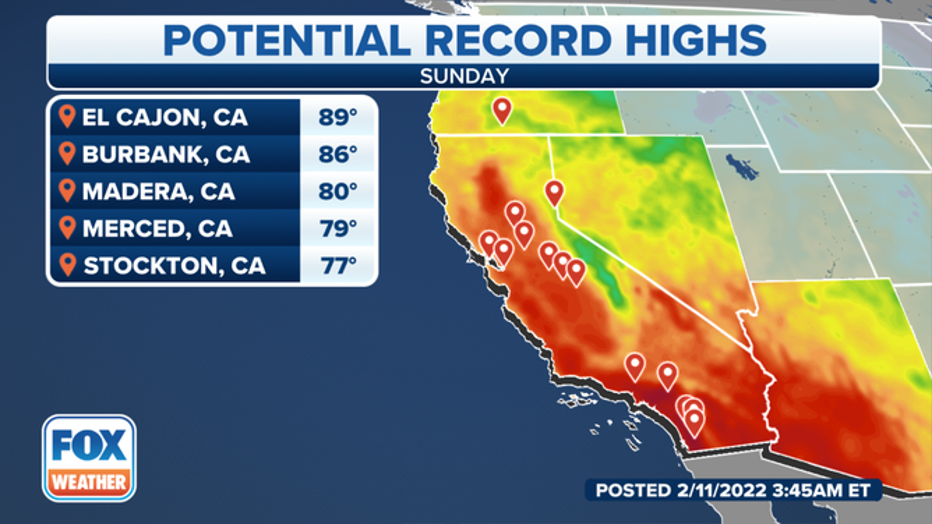 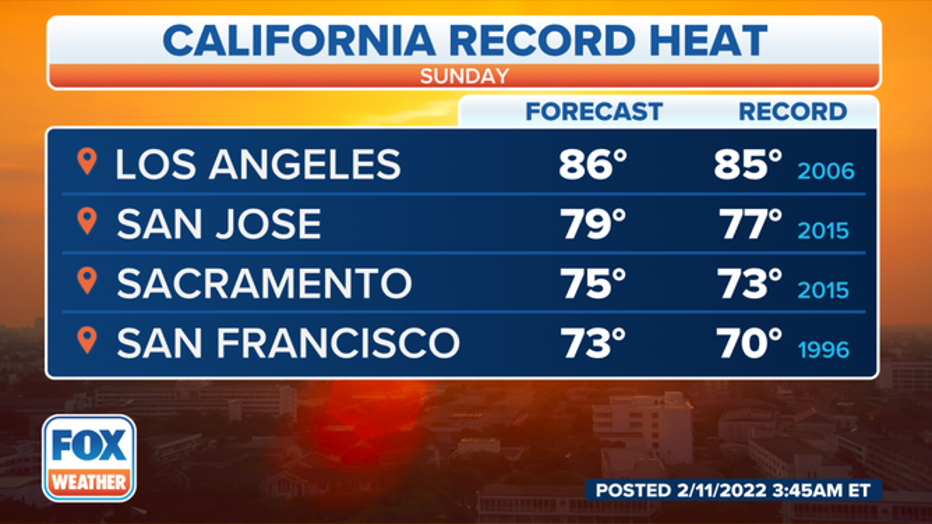