De-icing and anti-icing are standard practices for most airlines nowadays, but that wasn’t always the case.

"Deicing is time-consuming," she added. "That puts pressure on pilots to stay on schedule and not deice. So over the years, the FAA got involved, and really now it's more of a ‘we will do’ more than ‘we won't.'" 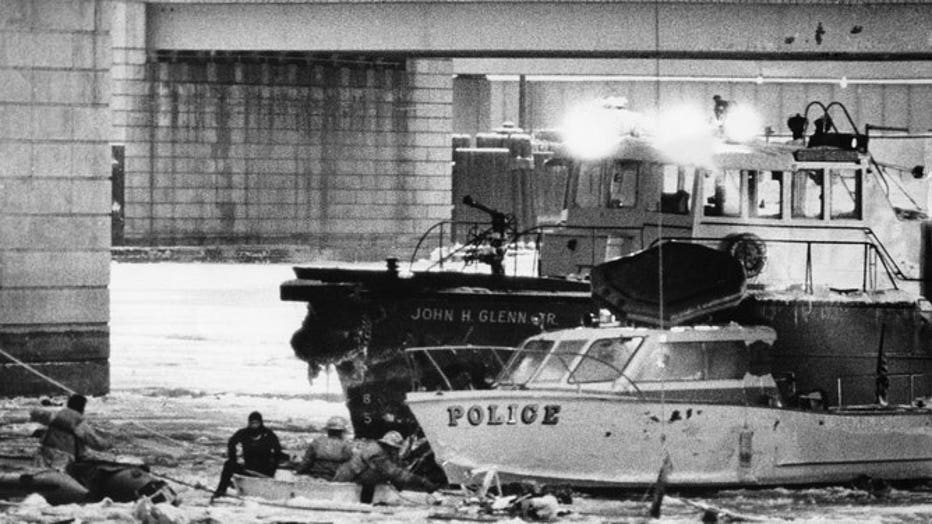 WASHINGTON, DC - JANUARY 13: Rescue crews search the ice-choked river under the northbound span of the 14th Street Bridge, after Air Florida's Flight 90 crashed into the Potomac River, on January 13, 1982. The bridge connects Washington, DC to Arling

"The takeoff icing accident that really put deicing on the FAA’s radar was Air Florida flight 90," recalled Bangs about the Jan. 13, 1982, crash. 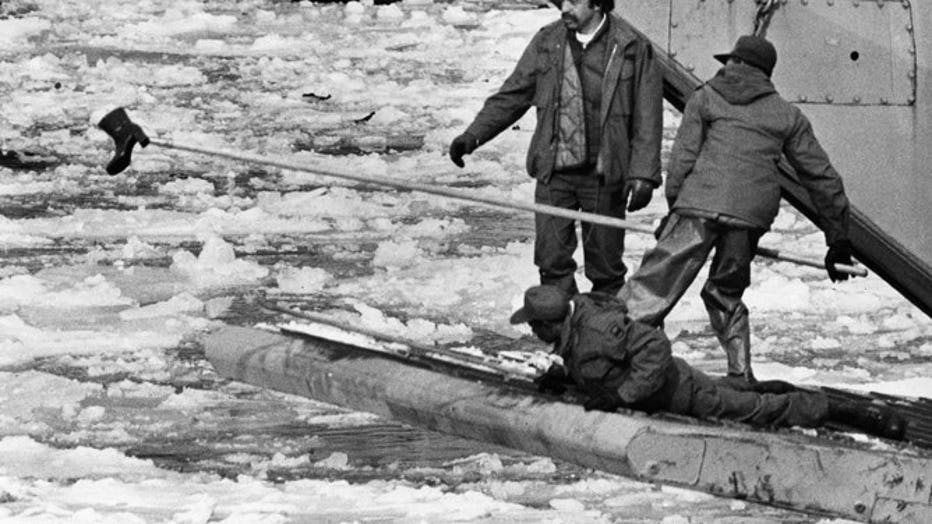 The airliner hit seven cars before plunging into the ice-covered Potomac River. Only four passengers and one crew member survived the crash among the 83 onboard. Four people on the bridge were killed, and four others were injured.

Jan. 13 marks the 40th anniversary of the accident. 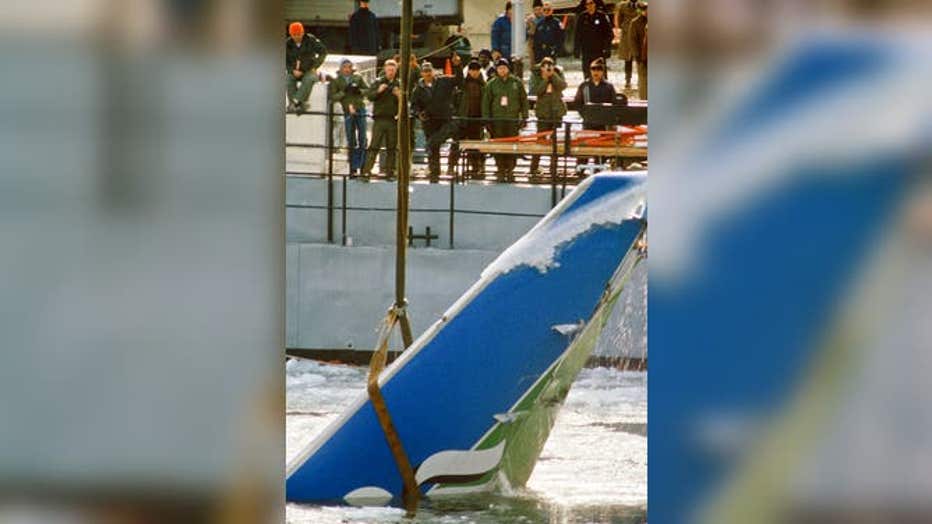 The National Transportation Safety Board found that the captain did deice the plane initially but did not anti-ice while on the ground. Moderate to heavy snow closed the airport temporarily, and the flight was delayed for one hour and 45 minutes, allowing the frozen precipitation to accumulate on the wings. 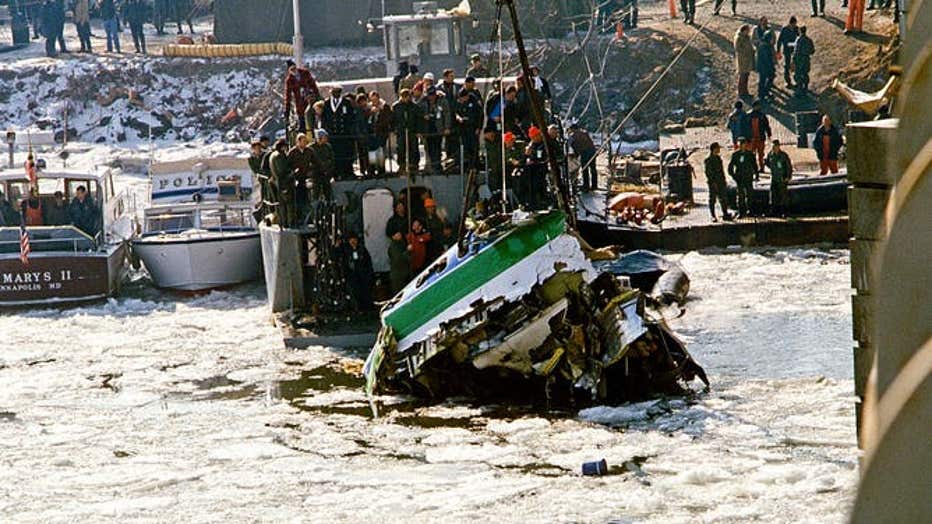 View, from a bridge, of a section of Air Florida Flight 90 as it is lifted via crane out of the Potomac River, Washington DC. (Photo by Mark Reinstein/Getty Images / Getty Images)

"Flight crews studied the aftermath of this failure to deice accident for decades," Bangs said. "It used always to be that decision was always with the pilot. But I'd say that there's an atmosphere now where it's [deicing] almost assumed if there's visible moisture and the temperature is anywhere near freezing."

Bangs said she can remember a situation herself being in St. Louis in a blizzard.

"Almost like a slushy day, freezing rain type situation, and we had the ice. But then we taxied out to take off. It was dark. It was rush hour. There's a long line of aircraft," Bangs recalled. "And as we sat there, and I watched the slush build up on the cockpit windshields. I realized it was building up this quickly on the windshield. There's no way the wings weren't completely contaminated. I suggested that we go back and deice and anti-ice a second time, which of course, was going to make us really late, and we were going to lose our place in position. But the captain said, 'I'd rather not.'

The ‘what next’ then followed.

"And then I was thinking, ‘OK, now what am I going to do?’ And so luckily for me, a guardian angel who will always be anonymous was in a jet behind us, and he came on the radio, and he said, ‘You know, flight 572, you have a huge amount of slush building on your tail and wing surfaces. I just wanted you to know," Bangs said. 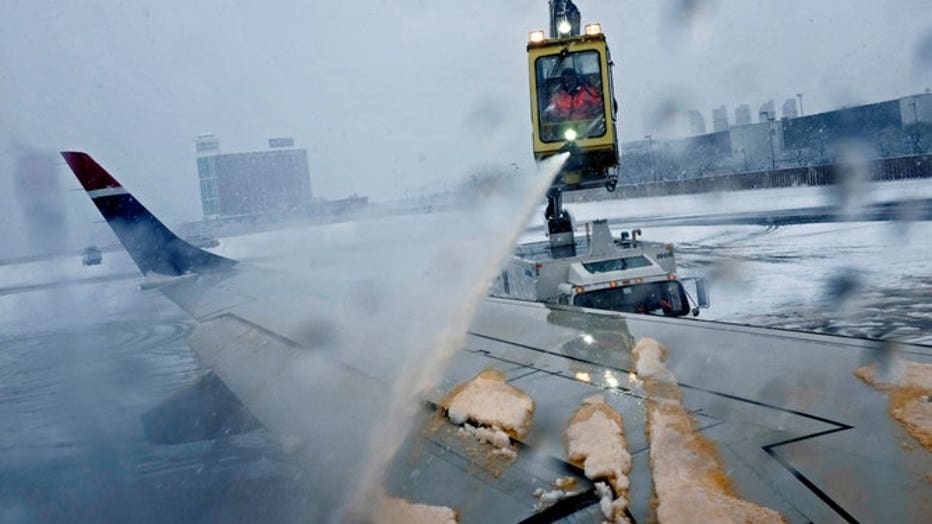 Heated deicing fluid, sprayed at pressure melts and removes accumulated snow and ice from a wing at Boston Logan Airport. (Photo by Sean Proctor for The Boston Globe via Getty Images / FOX Weather)

"Well, thank God, because when he broadcast that out over the air that also went to air traffic control at that point, then we had to do something because if something had happened, he'd broadcast on the air. So we did go back. But now a lot of that has been relegated to various manuals and procedures, so it's gotten very regimented."

The physics of flight require a clean aircraft

"Wind tunnel tests have proven that frost, snow, and Ice, or other surface contaminants no thicker than a sheet of sandpaper can reduce lift by almost one-third," said Patrick Guerin, United’s flight operations manager at Chicago’s O’Hare International Airport – one of the busiest in the United States.

"The physics of aerodynamic lift require airflow to stream both below and above the wing over a smooth surface. Ice and/or snow can disrupt that smooth airflow over the wing and tail surface, increasing drag and can ultimately lead to a loss of lift," explained Guerin. "So, it’s very important to keep the wing and tail surface clean and clear of any contaminants [snow and ice]. Liquid deicing and anti-icing fluid that is sprayed on the wing before takeoff is designed to steam off the wing during takeoff."

When are deicing and anti-icing necessary?

Deicing and anti-icing depend on the temperature and weather at an airport. The air temperature at the airport might be above freezing, but the plane's surface and fuel were chilled to flight level temperatures at altitude, which could be 50-60 degrees below zero. Frost can quickly build on the cold wing.

"That could be a temperature of even in the 40s. Because when it [humid air] hits a metal surface, especially with that cold fuel, you can get that kind of instantaneous freezing," Bangs said. 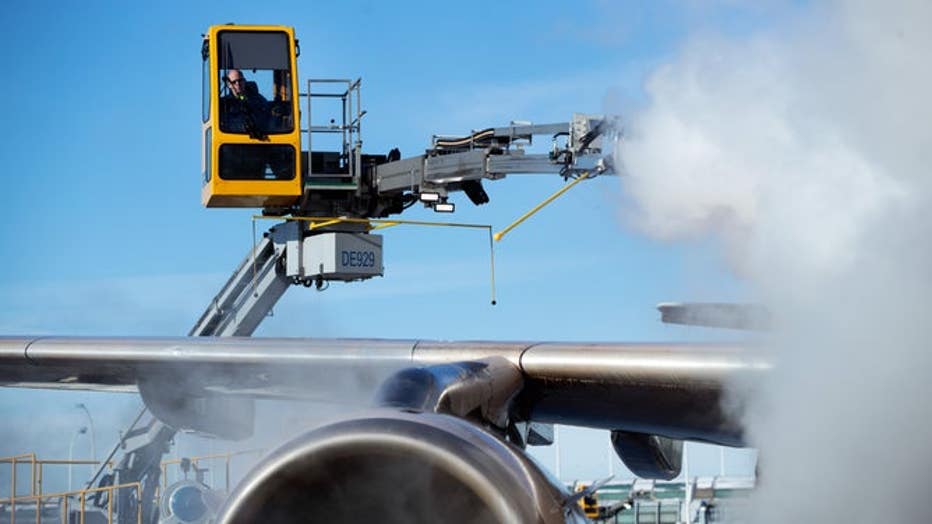 Chris Pearson is United Airlines' supervisor of airport operations and master instructor and trainer of deicing at O’Hare Airport.

What is deicer and anti-icer?

Deicer is what crews spray that's a mixture of pressurized water and propylene glycol heated to 140-180 degrees on the fuselage, wings and tail section. That melts and/or knocks off frost and ice. If no freezing precipitation is falling, the jet does not need anti-ice.

"The effectiveness of deicing fluid is very minimal for falling freezing precipitation – about six minutes," explained Pearson. "Anti-icing fluid protects the aircraft from ice and snow buildup while on the ground."

As a passenger, you may have noticed crews spray orange-tinted deicing fluid on the plane then a thicker, green-tinted anti-icing fluid. 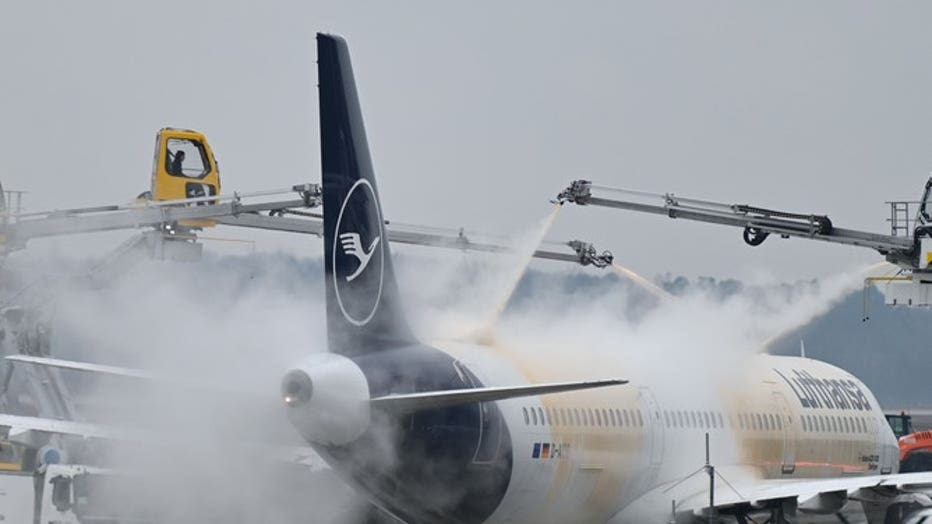 Crews spray down this A321 with orange deicing fluid to remove frost, snow and ice. (Photo by Arne Dedert/picture alliance via Getty Images / Getty Images)

Propylene glycol, (called Type-I) lowers water’s freezing point down to about 50 degrees below zero, depending on the concentration and air temperature. It’s non-toxic and food grade. Look for it in bread, food coloring, cosmetics and medicines. It is also the liquid that makes fog in a fog machine.

"Sometimes you will see passengers in a panic because, ‘oh my god’, they think the cabin’s filling with smoke," said Bangs of any fluid that enters the plane when the flight crew turns the air conditioning back on in the cabin. "But it's not. It's just some of the mist from deicer or anti-ice."

How much deicing fluid will a commercial aircraft use? "As little as 2 to 5 gallons for frost conditions and as much as 500 to 700 gallons for rime ice or falling precipitation for (Type-I) deicing fluids," Pearson explained.

Most anti-ice used for major commercial airlines today, called Type-IV, is also made from propylene glycol and a thickener. The substance clings to the aircraft’s surfaces like maple syrup, which many say it smells like. Types II and III are used by smaller planes or being phased out.

"Anti-icing fluid will have what is called a holdover time of anywhere from two minutes up to as high as three hours depending on the type of precipitation and temperatures," said Pearson.

Holdover time is the amount of time that the anti-ice will melt ice and snow.

If the aircraft is on the ground in freezing precipitation longer than the holdover time, the flight crew will make a visual inspection and may choose to go in for another round of deicing and anti-ice. Once the plane is a few hundred feet in the air, most of the anti-ice has sloughed off.

Improvements led to efficiency in both anti and deicing, said Pearson. "Fluids, specifically anti-icing fluids have gone from nonexistent in the 80s (T-I was used twice) to T-II in the 90s to give the flight crews 30-60 minutes of holdover time to now T-IV and upwards of three hours of holdover time depending on the manufacture." Deicing can be completed in as little as five minutes at O’Hare to up to 30 minutes for anti-icing as well. 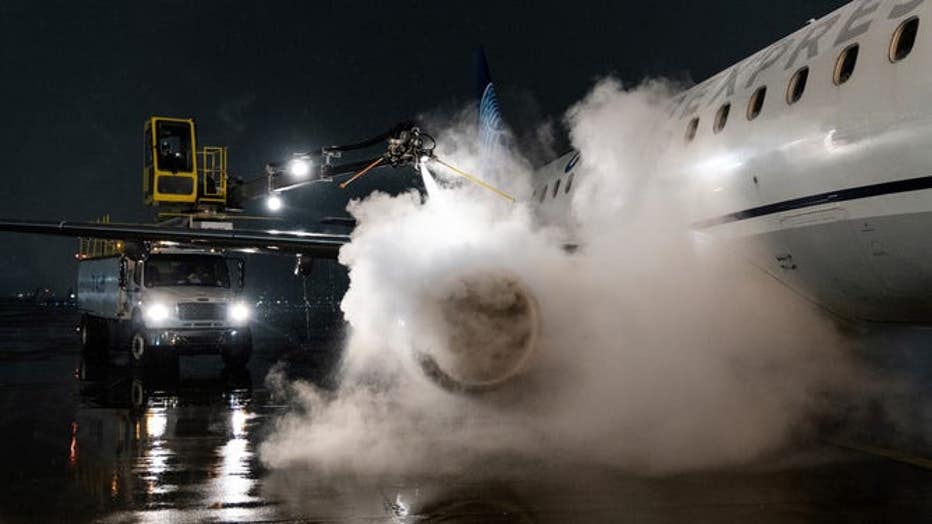 Guerin said United maintains deicing/anti-icing capabilities at all of their 'at risk' winter stations with either United personnel or contract providers who are trained by United personnel.

Bangs remembers a fellow pilot who had to make an emergency landing at a Montana airport where the airline did not have a contract for deicing.

"And before they could take off again, they needed to deice. And the deicer said, 'Well, we don't have a contract with your airline, so I'm not going to do ice unless you give me your credit card,'" Bangs said. "The captain had to give his personal credit card to the ground icer there. He joked, 'Well, I got at a high credit limit on my Amex card, so I can get out of Montana.'"