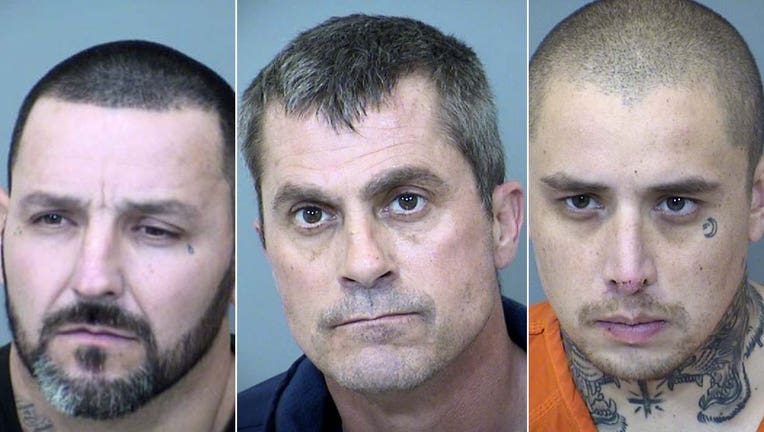 Carl Blazak, Keith McCollough, and Jimmy Eslinger were arrested in connection to the shooting death of Richard Coss, police said.

PHOENIX - The Phoenix Police Department says three men have been arrested for shooting and killing another man after an alleged altercation with a female neighbor.

Just before 1 a.m. on Dec. 18, officers responded to reports of a shooting near 23rd Avenue and Deer Valley Road. That's where they found 25-year-old Richard Coss dead.

"Preliminary information is the victim was shot in an apartment after an altercation," says Phoenix Police Sgt. Ann Justus.

Detectives developed probable cause to arrest 46-year-old Carl Blazak on suspicion of murder. He was booked into jail.

Police released further details on the shooting two days later, saying Blazak and the two other unknown suspects showed up to Coss' apartment, pushed their way inside, and shot him.

That's when Coss reportedly opened the door and at least three men rushed inside and began fighting with the victim.

"The witness observed one of the males produce a handgun and shoot The victim in the chest. After the shooting, the suspects fled the apartment. The witness stated everyone was wearing masks, so he could not identify anyone," police went on to say.

Coss' girlfriend told police that her boyfriend and a female downstairs neighbor, who she is reportedly friends with, got into an argument.

"After the altercation, the female neighbor informed the witness she called someone to take care of the victim," police said. That's when Blazak and the group of suspects allegedly arrived and killed the victim.

A witness fled after she heard a gunshot, saying she didn't see the shooting take place, but was able to see one of the men who wasn't wearing a mask and identify him as a suspect by looking at a photo.

A search warrant was conducted at the home of the suspect, and he and his wife were taken into custody, police say.

On Dec. 23, police announced that 49-year-old Keith McCollough and 29-year-old Jimmy Eslinger were also arrested in connection to the shooting.

Both men were booked into jail and are accused of first-degree murder.

Anyone with information about the incident is asked to call the Phoenix Police Department at 602-262-6151, or Silent Witness at 480-WITNESS. Silent Witness callers can remain anonymous and may be eligible for a cash reward.

Second arrested made in deadly Dec. 18 shooting in Phoenix

Shooting breaks out at Scottsdale house party held at an Airbnb, police say

A shooting broke out at a Scottsdale house party being held at an Airbnb on Dec. 18. Several gunshots were caught on a neighbor's surveillance cameras and one person has been arrested, but not related to the shooting.

The body of 35-year-old Quincy Thomas was found near 65th Avenue and Thomas Road on Dec. 8 and police say the condition of his body indicates he was killed by someone.

Scottsdale Police and federal officials have announced a record fentanyl bust in the Valley, with nearly 1.7 million pills being taken off the street.