Three teenagers are being accused of armed robbery at a Super 8 motel in Goodyear earlier this week.

The alleged robbery happened at a motel near Interstate 10 and Dysart Road on March 21. Police said two people were robbed by three or four suspects armed with guns and knives.

"One victim was assaulted and property was stolen, including a vehicle," Goodyear PD said in a statement.

The suspects were seen dumping items from inside the stolen car into a nearby dumpster. When they were confronted by a resident, police say one of the armed suspects chased them away.

Police later found three of the suspects, who attempted to split up and ran away.

Two ran into an apartment near Van Buren and Palo Verde Drive while the third was found and arrested in the same neighborhood.

Officers say they found three suspects when they searched the apartment, and one extra person matching a suspect description was arrested after police caught them walking down the street.

"Stolen property was found on the suspect, including the keys to the stolen vehicle," police said. 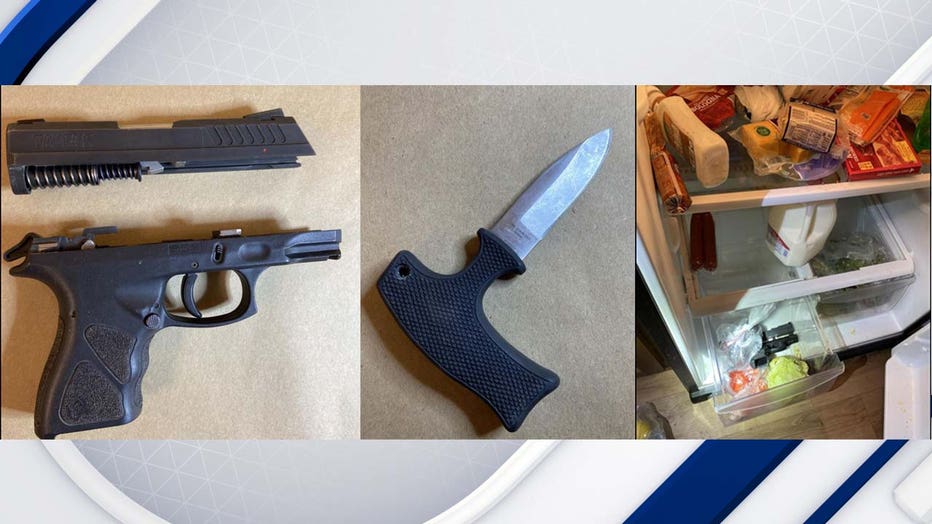 Photos of the weapons recovered by Goodyear Police.

Police found more stolen items inside the apartment, including a stolen gun believed to have been used during the robbery. A nearby resident also reported finding another gun used in the crime dumped in their backyard, officials said.

In total, five people were arrested. Two 14-year-olds and a 16-year-old were arrested and booked into jail on charges including armed robbery and aggravated assault, while two other adults were arrested on unrelated charges.