A 'tidal wave' of drugs: Arizona authorities deal with record amounts of fentanyl

DEA officials say nearly 12 million fentanyl pills were seized in 2021, which is double the amount seized the year before. FOX 10's Justin Lum has more on the drug epidemic's impact on Arizonans.

PHOENIX - There is a record amount of fentanyl pills spilling into Arizona and across the country, and federal officials are calling this a ‘tidal wave’ of drugs.

We sat down with the Special Agent in Charge at the Phoenix Field Division of the Drug Enforcement Administration (DEA) the day before another drug bust was announced. Cheri Oz says she is terrified, as authorities seized nearly 12 million fentanyl pills in 2021, which is double the amount seized in 2020. DEA numbers also show more than five tons of meth were seized in 2021. 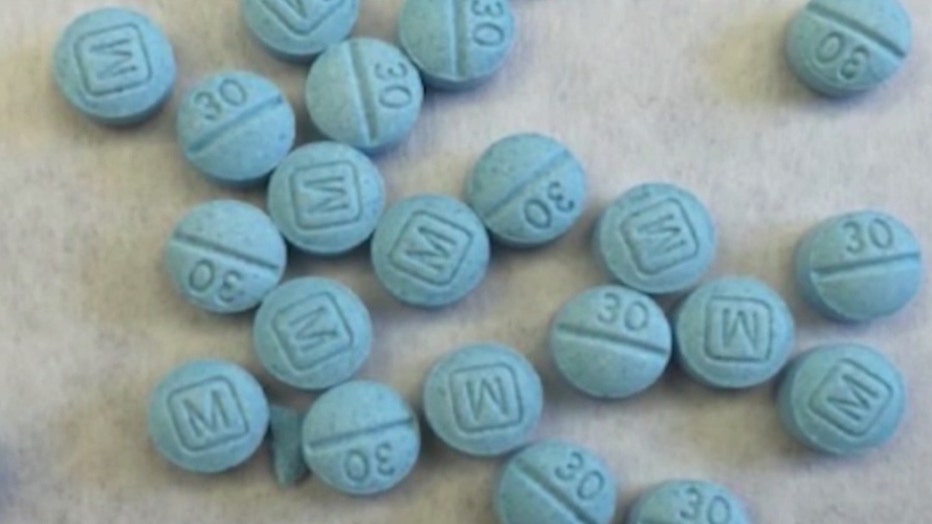 Fentanyl is a synthetic opioid that is 80 to 100 times stronger than morphine. According to the Centers for Disease Control and Prevention (CDC), the number of fatal drug overdoses in the U.S. surpassed 100,000 during a 12-month span from May 2020 to April 2021, for the first time.

"In 25 years of law enforcement, I’ve never seen anything like this fentanyl epidemic," said Oz.

Of the deaths, 64% involved synthetic opioids.

"The pills have a 42% lethality rate, which means two out of every five pills could be a lethal dose," said Oz.

Oz says a lot of the drugs are coming from Mexico.

"The vast majority of the fentanyl, methamphetamine that we’re seizing in Arizona is made by the Sinaloa Cartel," said Oz. "The Sinaloa Cartel uses the routes that traffic the networks through Arizona, and that’s what we seize here in Arizona."

For many of Mexico's transnational criminal organizations, the manufacturing of fentanyl powder and pills goes down in sophisticated, clandestine laboratories

"So, super labs are a newer evolution in Mexican. Super labs have existed in other parts of the world. The Mexican cartels have just now captured the super lab business model. It’s unquantifiable how much of the precursor can be made into how much of the substance," said Oz.

High-volume loads, ready to be smuggled through trafficking corridors to California and Arizona, where the DEA officials are busy. 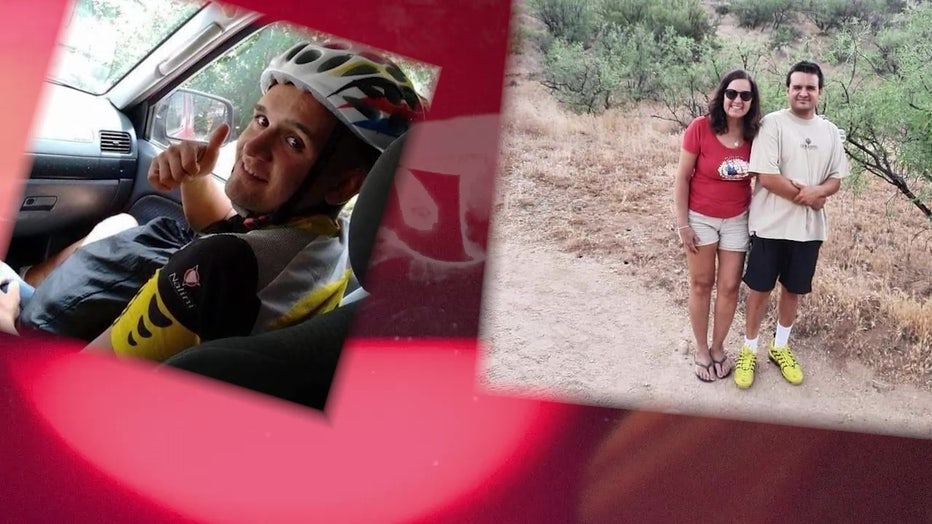 Guerrero is reminded about her son constantly.

"You think, ‘gosh, if he only would have had an hour.’ Can you know? Only I would have known, and you just beat yourself up about it, but you know, unfortunately, you know that's all it is, is just replaying in my head. You know quite often. Not every day, but quite often."

Guerrero would give anything to get time back, a chance to save her first-born, Jacob Guererro.

On May 30, 2020, Jacob's uncle found him unresponsive. Later, Theresa learned her son used cocaine, and says it had been laced with fentanyl.

"He was happy. It was really sad that he had to go in a time in his life when he was having fun. It's just so unfair, you know?" said Guerrero.

Arrests have been made in Arizona as epidemic rages on 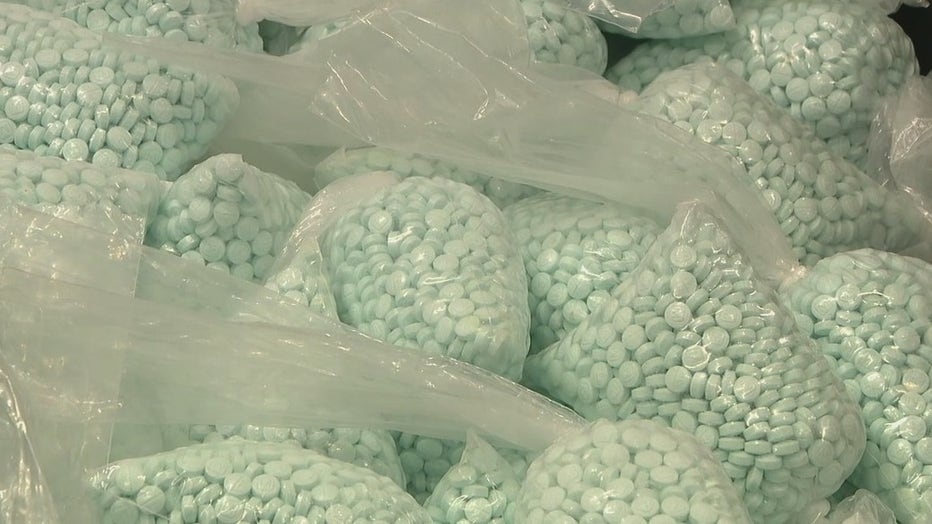 In recent months, we have reported on a number of drug-related arrests in the state.

In Phoenix, three men are behind bars, after they were arrested on Feb. 3 and accused of distributing drugs out of a used car dealership. In this case, authorities seized 20 pounds of meth, 4,000 pills believed to contain fentanyl, and 14 firearms.

In the same city, investigators say an 18-year-old admitted to selling fentanyl pills he received from a Mexican drug cartel. DEA officials, in this case, seized 271,000 pills, along with meth, cocaine and about $250,000 in cash.

In Pinal County, deputies seized 227,000 fentanyl pills from a smuggler's car. The drugs were hidden in large, buffet-style trays of food.

In December 2011, a record bust took place in Scottsdale, where the DEA teamed up with Scottsdale Police and the Arizona Attorney Heneral's Office to seize 1.7 million fentanyl pills, as well as 10kgs of fentanyl powder. 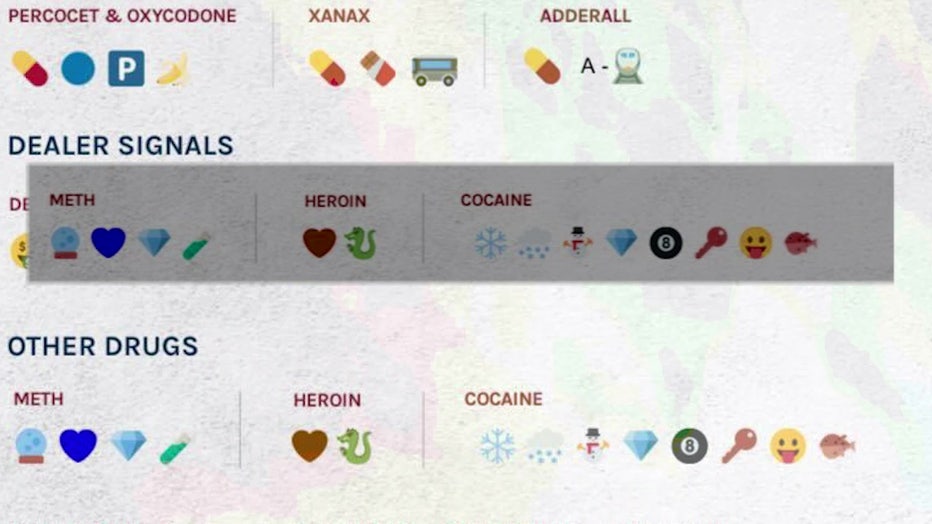 A partial list of emojis allegedly used in reference to drugs

Oz says drug traffickers are coming for young people via social media, using the language of emojis to buy and sell counterfeit pills.

The dozens of different symbols are unique to specific drugs, like oxycodone, xanax, Percocet, and adderall, from cocaine to cough syrup, and codes to identify a drug dealer.

Guerrero says parents need to get educated, and fast.

"We need to save these kids," said Guerrero. "We have to, you know? We just -- we can't let this happen to this generation. We can't." 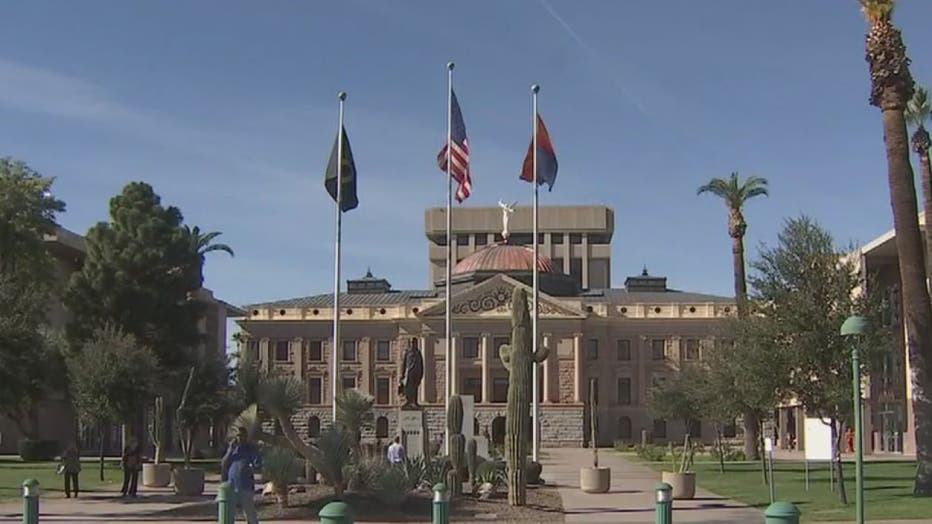 Recently, State Rep Quang Nguyen (R) introduced House Bill 2021. Under the bill, if the state can prove that a person transfers a dangerous drug to someone and it causes death, that person would be guilty of drug trafficking homicide.

The legislation would classify the crime as a class one felony, which is comparable to first or second degree murder.

Other Crime in Arizona Stories