Dr. Linsey Marr, a Virginia Tech professor with expertise in airborne transmission of viruses and air quality, discusses ways to make offices and schools safer amid the pandemic.

Since the start of the pandemic, scientists have been racing to understand how the novel coronavirus is spread.

Public health guidance has stated that it is primarily spread through large respiratory droplets expelled when a person with COVID-19 coughs or sneezes, but mounting scientific evidence suggests that even tinier virus particles can also linger in the air and infect people as they inhale.

Known as airborne transmission, the risk of this situation is highest in crowded indoor areas with poor ventilation.

As people return to their offices, children return to schools, and restaurants, bars and churches welcome patrons back into their establishments, the implications of the novel coronavirus being airborne are significant — and it could alter many of the current measures being taken to slow the trajectory of the pandemic. 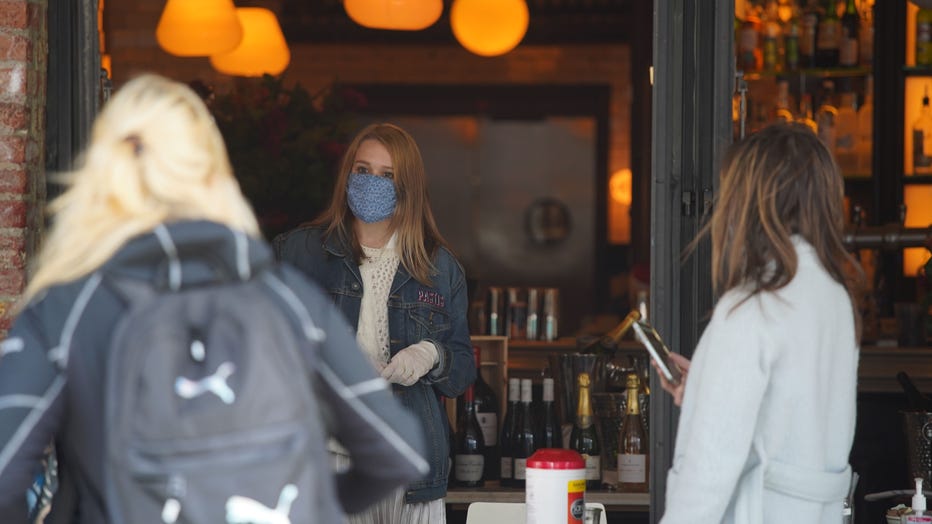 A file image dated May 19, 2020 shows a bartender wearing a protective face mask and gloves while speaking with customers at a bar set up outside on the street in New York City. (Photo by Rob Kim/Getty Images)

Dr. Linsey Marr, a professor at Virginia Tech with expertise in airborne transmission of viruses and air quality, said the emphasis should be on better ventilation — along with other protective measures such as wearing a mask, physical distancing and hand washing — to help curb the spread of COVID-19.

What we know about airborne transmission of COVID-19

“Often, the term ‘airborne transmission’ creates panic because people imagine these clouds of virus roaming around the streets coming after them. But that’s not the way it works,” Marr said. “The concern is greatest when you are close to a person who happens to be infected, if they’re talking, especially if you’re indoors because the virus can build up in the air.”

Marr was among 239 scientists from a variety of fields who recently contributed to an open letter calling on the World Health Organization to acknowledge that the coronavirus can spread in the air and urging the WHO to update its official guidance on the subject.

Scientists wrote that studies have shown “beyond any reasonable doubt that viruses are released during exhalation, talking and coughing in micro-droplets small enough to remain aloft in the air.”

These micro-droplets, or aerosols, contain less virus than large droplets do when a person coughs or sneezes. But because they are lighter, they can also linger in the air for an extended period of time, possibly up to two hours in confined areas that aren’t well ventilated.

In the letter, scientists said evidence suggests the tiny droplets pose a risk of exposure at distances beyond 1 to 2 meters (3 to 6.5 feet) from an infected individual. They also cited research on a poorly ventilated restaurant in Guangzhou, China, and a choir practice in Washington state, each of which raised the possibility of infections from airborne droplets.

The WHO has long maintained that COVID-19 is spread via larger respiratory droplets that then fall to the ground. It had dismissed the possibility of airborne transmission except in certain high-risk medical procedures, like when patients are first put on breathing machines.

But following the letter from scientists, the WHO acknowledged the “emerging evidence” on the subject and said it was working on a scientific brief summarizing what is known about airborne transmission, which would be shared in coming days.

RELATED: WHO acknowledges 'emerging evidence' that coronavirus can spread through the air

“I think it’s great that they’re acknowledging it because there are a lot of public health agencies around the world who take their cues from the World Health Organization,” Marr said. “This will be helpful in developing new guidance and hopefully help in stopping the spread of the pandemic.”

The open letter was led by Professor Lidia Morawska, an internationally-recognized air quality and health expert and a WHO consultant. Morawska began studying infection spread via airborne transmission when SARS-CoV-1 was identified in 2003.

Historically, there has been debate over how much transmission of respiratory infections occur through the production of aerosols. Morawska said she was “really happy and relieved” by the WHO’s statement.

“It’s not just about COVID, it’s about the future of infection transmission which affects everybody, several times a year, everywhere in the world. We need to properly deal with it,” added Morawska, who is also the director of the International Air Quality and Health Laboratory.

Official health guidance from the CDC states that everyone should also wear a cloth face covering in public settings, especially when other social distancing measures are hard to maintain.

But how long is too long to stay indoors? Marr said that a quick ride in a crowded elevator is less risky than if you’re sitting in a bar for a longer amount of time.

“We think it takes a bit of time for the risk to build up to a level where you should be worried about transmitting the disease, so a few minutes is probably not a problem,” Marr said. “But if you’re in a crowded indoor space that has poor ventilation and people are not wearing masks, then something like 15 to 30 minutes could become problematic.”

How to make workplaces, schools, planes and other public environments safer

Marr, who is a professor of civil and environmental engineering at Virginia Tech, said there are ways to make indoor spaces safer — start by opening windows and doors.

Public buildings, workplace environments, schools, hospitals and nursing homes should consider adding “sufficient and effective ventilation” that brings in clean, outdoor air and minimizes recirculating the air, as well as the addition of ultraviolet lights that can kill airborne viruses.

“Other things you can do is space people farther apart, maybe stagger their work times so that you have fewer people in the office at the same time,” Marr suggested. “Adding better filters to your HVAC system is also useful, if it can handle it. And then the stand-alone air purifiers that remove particles — they’re called HEPA purifiers — those can also be helpful.”

Amid the push to reopen schools and colleges in the fall, Marr said some of the same advice applies.

“They’re more resource constrained, but simple things like opening windows and doors whenever possible is useful. Get the kids out of the classroom every hour or two to allow virus that might be in the air to dissipate and be removed as outdoor air comes in. Distancing and masks are really important also in those situations,” she said.

In the sky, some airlines have announced plans to fly again at full capacity. Commercial aircraft are filtered by high-grade HEPA filters, which filter the cabin air every 2 to 3 minutes and remove more than 99% of airborne particles, including the novel coronavirus, according to the International Air Transport Association.

Marr said the greater concern with flying is the people seated next to you, who are breathing, talking and potentially releasing virus into the air “that you could breathe in before it has a chance to make it through the airplane’s filtration system.”

Experts agree that as the pandemic continues, do as much as you can outside. And if you must go inside, try to minimize that time and wear a mask.