A timelaspse video captures the iconic levanter cloud rolling over the Rock of Gibraltar. Credit: Met Office Gibraltar via Storyful

Air travelers were treated to an astonishing view of the levanter cloud rolling over the Rock of Gibraltar. The stunning scene occurred Wednesday as flights arrived and departed from the Gibraltar International Airport.

A timelapse video posted by the Met Office in Gibraltar, which serves the British Forces Gibraltar and Gibraltar International Airport, captures the amazing view which shows the levanter cloud rolling over the massive rock as a plane takes off from the runway.

"The London Gatwick @easyJet flight taxiing and taking off from @RAF_Gib this morning with the backdrop of some impressive #Levanter cloud over the Rock of #Gibraltar The #levanter cloud just keeps getting better today!" the Met Office tweeted Wednesday. 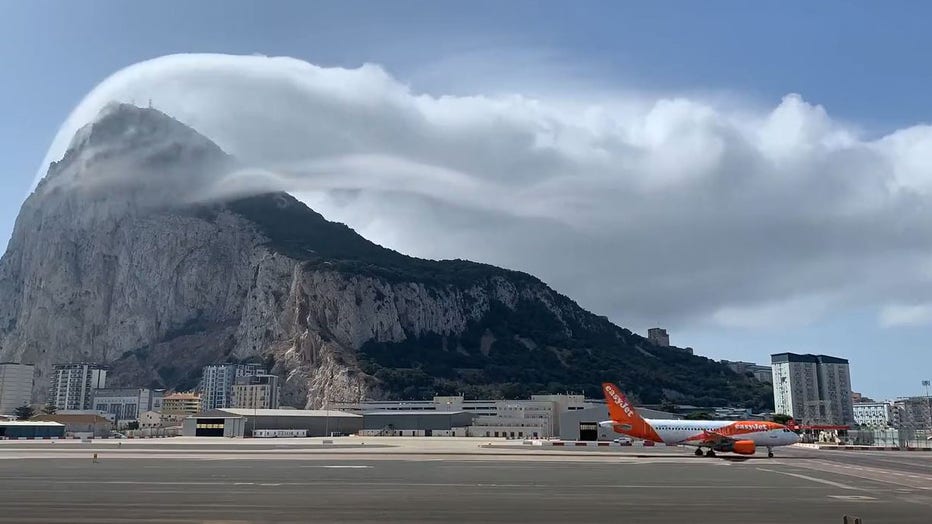 Gibraltar is a tiny British overseas territory home to 33,000 people. The narrow territory stretches between Spain and the mouth of the Mediterranean Sea.

According to the Met Office, the levanter cloud is produced by the ‘Levante’, an easterly wind that brings warm moist air from the Mediterranean which condenses over the Rock, creating "a persistent veil of cloud" that hovers over it.

FOX5 DC contributed to this story. This story was reported from Washington, D.C.