Wednesday was day three of the blockade on the Canadian side of the Ambassador Bridge and at least one automaker is canceling shifts due to a parts shortage brought on by the protest.

DETROIT (FOX 2) - As Canadian truckers continue to protest the nation's COVID-19 vaccine mandate, it's still jammed up traffic on the Ambassador Bridge and General Motors has now canceled at least one shift at a plant in Lansing.

GM announced just before 5 p.m. on Wednesday that it would cancel its second shift at its Delta plant in Lansing due to parts shortages brought on by protests against COVID-19 mandates.

Canadian Police and officials are working to resolve the protest of the nation's COVID-19 restrictions. The Ambassard Bridge is one of the most-traveled routes between the two countries but it remains partially closed with only some traffic coming into the U.S.

The blockade at the Ambassador Bridge between Detroit and Windsor, Ontario, prevented traffic from entering Canada while some U.S.-bound traffic was still moving, Public Safety Minister Marco Mendicino said, calling the bridge "one of the most important border crossings in the world." It carries 25% of all trade between Canada and the United States.

With nobody being able to cross into Canada, drivers are taking I-94 up to the Blue Water Bridge in Port Huron. FOX 2 followed the route up I-94 and, thanks to GPS, we were able to take a few detours to get us a bit closer. But even then, traffic moved at a snail's pace and th ewait to get into Canada was several hours.

Thanks to the GPS, we took some back roads into Port Huron and made it to the Blue Water Bridge as truck drivers inched their way forward.

Back in Windsor, police can't forcibly remove the protesters and the longer it goes, the more it increases delays for automakers.

Canadian Transport Minister Omar Alghabra said such blockades will have serious implications on the economy and supply chains. "I’ve already heard from automakers and food grocers. This is really a serious cause for concern," he said in Ottawa, the capital. 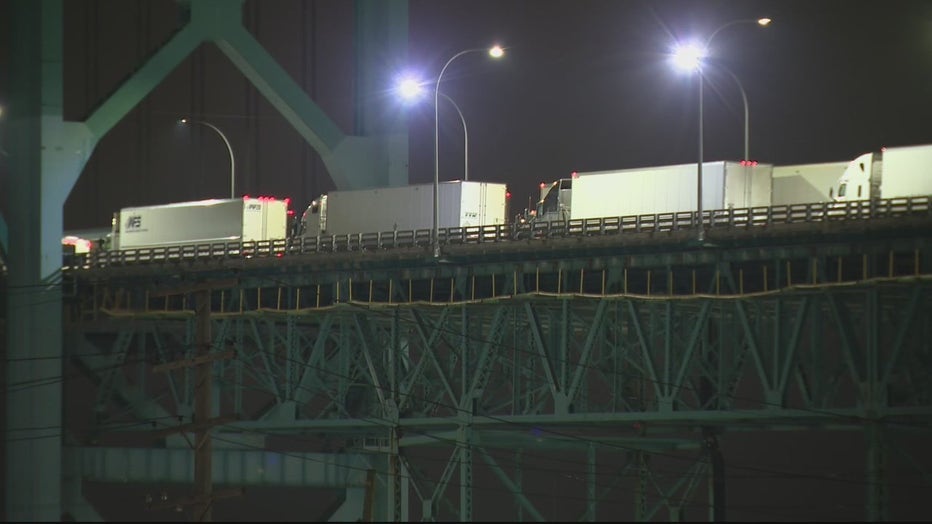