LOS ANGELES - On a day dedicated to honoring our fallen heroes, police were investigating after American flags were allegedly stolen at the Los Angeles National Cemetery.

On Memorial Day, officials said the Garrison flag, which measures 20 feet by 30 feet, was missing from the United States National Cemetery located in West LA. Officials say it usually takes four eople to stretch and fold the flag, given the large size.

On a day dedicated to honoring our fallen heroes, police were investigating after American flags were allegedly stolen at the Los Angeles National Cemetery.

Authorities said that at some point Sunday night or early Monday morning, someone jumped the fence, broke in and took the Garrison flag, as well as other flags. Based on the size of the Garrison flag, it is believed it would have taken at least three people to carry out the crime. 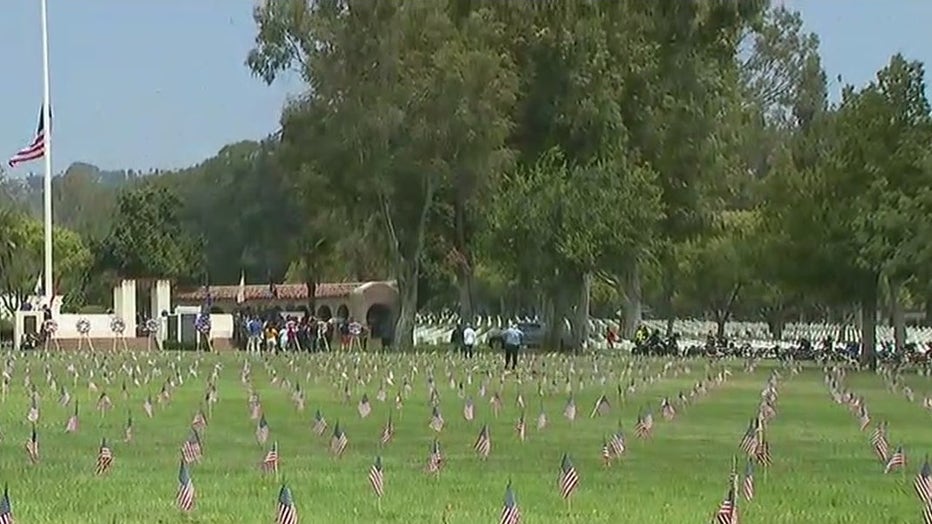 The volunteers who work at the ceremony noticed the flags were missing Monday morning and said it was a brutal discovery, especially given the timing.

"Every single monument you see here is someone who signed up and spent some of their life in service to our country so we can enjoy everything that we enjoy today. And to hurt their final resting place is just unbelievable," said Rebekah Adams, President of the LA National Ceremony Support Foundation.

"To steal the flag that flies above the men and women, who served in the military, and even died during their service, is beyond hurtful. The least we can do for those buried here, is honor them and remember them, and this is such a disservice to them," Adams added.

Officials said there was nothing left at the scene that would indicate the potential suspects but were in the process of canvassing surveillance footage.

Veterans Affairs Police were investigating and have not released a statement on the incident.

Anyone with information is asked to call the Veterans Affairs Police at 310-268 4908.