The county is pressuring Gov. Doug Ducey to send them a portion of the coronavirus relief funding and on May 15 the board voted to sue to gain access to it.

PHOENIX (AP) — Arizona cities and counties are pressuring Gov. Doug Ducey to send them a portion of more than $1.9 billion in federal coronavirus relief funds he’s sitting on as they deal with plummeting tax collections and rising costs from the coronavirus outbreak.

Frustration boiled over Friday in Pinal County, where the Board of Supervisors voted unanimously to sue over the money. Other cities and counties have urged Ducey in letters and phone calls to send cash.

“If he’s going to be a bully, you have to punch a bully in the face,” Pinal County Attorney Kent Volkmer told the supervisors. “The only way to stand up to the governor right now is to initiate suit.”

Compounding the irritation in many areas: Arizona’s three largest cities and two largest counties got money directly from the federal relief package known as the CARES Act. Phoenix, Tucson, Mesa and the counties of Maricopa and Pima collectively received $960 million, and some have already begun spending it.

Arizona’s 88 other cities and 13 other counties say Congress intended for them to get a piece of the nearly $1.9 billion that’s earmarked for the state.

Local governments are eager to provide assistance to keep small businesses operating and prevent people from falling into homelessness or having their utilities shut off, said Nick Ponder, legislative director for the League of Arizona Cities and Towns.

“But without that allocation from the governor’s office, they can’t do it yet,” Ponder said.

“We know that there are a lot of needs out throughout the state, and we want to make sure that these dollars reach as many Arizonans as possible, and that we’re responsible in how we use them,” Scarpinato said.

The state has budget problems of its own. The widespread business shutdowns imposed to slow the virus spread zapped the state’s revenue streams while making more people eligible for publicly funded health care and other safety net benefits. The Legislature’s budget experts have issued a preliminary projection of a $1.1 billion deficit next year.

The fund that pays unemployment benefits also could run out of money in the coming months as it faces extraordinary demand, including from self-employed “gig workers” who have never before been eligible for jobless benefits. If the unemployment trust fund runs dry, the state could subsidize it with federal coronavirus relief funds.

Ducey’s top priority for the federal money is to support the health care system, Scarpinato said. The money will also bolster the state’s safety net programs, including unemployment, along with public education and law enforcement.

The Arizona Department of Health Services on Friday reported 27 new deaths attributed to COVID-19, bringing the total since the start of the outbreak to 651. There were another 495 confirmed cases for a total of 13,169.

The Phoenix City Council has voted to spend a portion of its $293 million in coronavirus relief funding on grants for small businesses; help for people struggling with rent, mortgages and utilities; expanded WiFi for children learning remotely; food delivery; homeless services; protective equipment for city workers; leave for employees affected by COVID-19; and a variety of other priorities.

Maricopa County, which received nearly $400 million, is looking to significantly expand its contact-tracing team, buy protective equipment, and rent hotels for people experiencing homelessness, spokeswoman Lisa Blyler said. The Board of Supervisors will consider “a plan to help the broader community” next week, she said.

Pima County is also buying protective equipment and hiring on contact tracers, and it plans an advertising campaign to educate the public about protective measures and social distancing, spokesman Mark Evans said.

In Pinal County, Arizona’s third-largest with rapidly growing exurban communities on the outskirts of metro Phoenix, leaders say an arbitrary boundary is blocking them from offering the same support to their own constituents.

“Every county should be treated the same,” Supervisor Stephen Miller said. “I just cannot understand why those dollars would not be distributed fairly and equitably throughout the state.”

The Republican-dominated Board of Supervisors voted to prepare a lawsuit against the federal government, demanding that Treasury Secretary Steven Mnuchin direct the states to use some of their relief money to help local governments. Volkmer, the county attorney, acknowledged a lawsuit will take months to wind through court but said it will get the attention of the decision-makers in Phoenix and Washington.

“We certainly hope that message gets back to the governor, that this CARES act funding is not to be a tool to balance the state’s budget,” said Supervisor Anthony Smith, the board chairman. 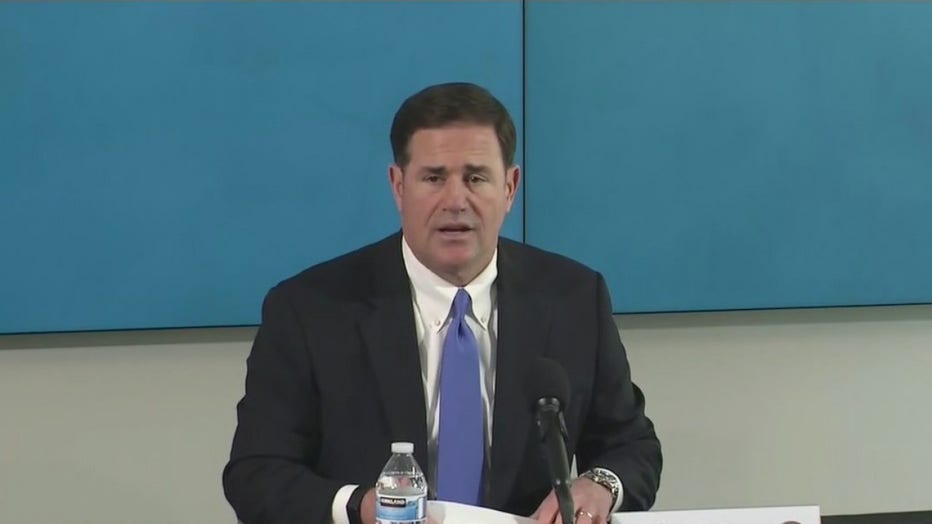 "This is an unnecessary action. The state will be responsibly investing CARES dollars across the state to benefit and help Arizonans. Like any budget process, we are being responsible to make sure this money is used wisely to reach as many Arizonans as possible. We will have more announcements soon."

In other coronavirus developments in Arizona:

— Some major churches in Arizona are resuming activities shut down because of the outbreak. The Church of Jesus Christ of Latter-day Saints said it will start allowing marriage ceremonies by appointment and with limited attendance starting Monday in temples in Gilbert, Phoenix, Snowflake, Thatcher and Tucson. The Diocese of Tucson of the Roman Catholic Church said it will gradually re-open parishes. While public Masses are not scheduled, pastors may petition the bishop for permission to begin limited services starting May 29.