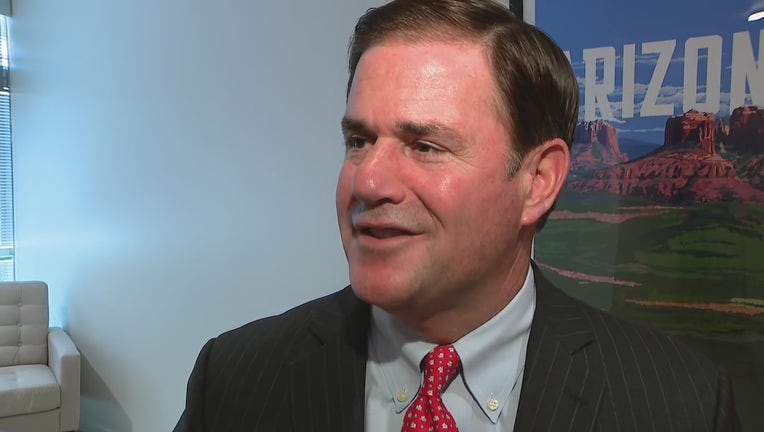 PHOENIX (AP) - Arizona Gov. Doug Ducey is defying a demand that he stop using federal coronavirus relief money to fund an education grant program that can only go to schools without mask mandates.

The Republican governor also is continuing a program that gives private school vouchers to parents upset that their children’s schools require masks or quarantines after being exposed to COVID-19.

In a letter sent to the U.S. Treasury Department on Thursday, Ducey’s federal grant team manager ignored the department’s demand that he stop using the money. Instead, Jason Mistlebauer said the money was appropriately being used to help students who were harmed by school mask mandates.

"In Arizona, disadvantaged communities bear the brunt of overbearing measures and the state wants to ensure that low-income students are not disproportionately affected by mask mandates rules and school closures," Mistlebauer wrote.

Despite the rationale Mistlebauer laid out, a $163 million grant program Ducey created goes to schools in high-income areas, but only if they do not require masks. And a much smaller program that gives private school vouchers to parents whose children’s public schools have mask mandates or require isolation after COVID-19 exposures doesn’t only target low-income children. Applicants can earn up to 350% of the federal poverty level, which equals $92,750 for a family of four.

Ducey, a Republican, created the grant programs in August to put pressure on school districts that have defied the state’s ban on mask mandates. That ban was later overturned by the courts, but Ducey has not removed the limits on which school districts qualify.

The Treasury Department last month said the grant programs are "not a permissible use" of the federal funding. It was one of a series of efforts by the Biden administration to push back against Republican governors who have opposed mask mandates and otherwise sought to use federal pandemic funding to advance their own agendas.

In the letter, Deputy Treasury Secretary Wally Adeyemo said the conditions "undermine evidence-based efforts to stop the spread of COVID-19." He asked the state to explain how it will "remediate" the problem within 30 days.

Ducey’s spokesman dodged a question as to why it did not respond to the federal government’s demand that it cease spending the money on unauthorized programs.

"The federal government laid out their case why they don’t think it’s appropriate," C.J. Karamargin said. "And we responded as they’ve asked us to do and provided our analysis as to why we think it is."

The federal Centers for Disease Control and Prevention recommends universal mask wearing for students and teachers in the classroom. The CDC issued the guidance in light of the rapid spread of the highly contagious delta variant of COVID-19.

Health officials in Maricopa County reported that schools without mask mandates had dramatically higher numbers of COVID-19 outbreaks. The report given to county supervisors in August was later used as a basis for a CDC report.