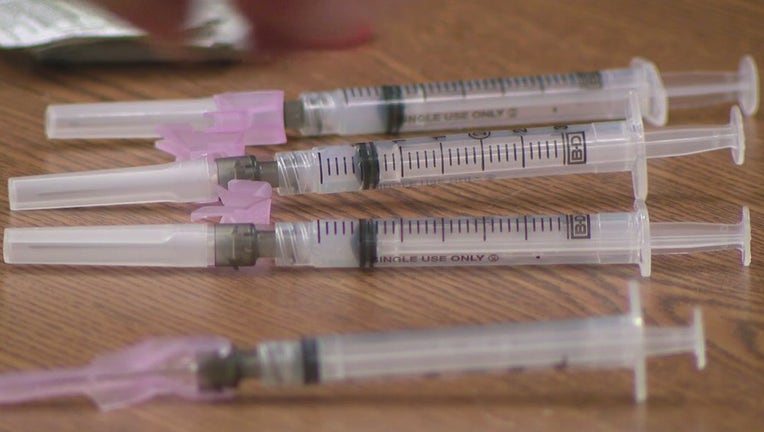 LUKE AIR FORCE BASE, Ariz. - As production of the COVID-19 vaccine ramps up, the next focus for officials needs to be ensuring people want to get the shot, U.S. Sen. Mark Kelly of Arizona said.

The recently elected Democrat said he's working to boost vaccine supplies in Arizona, making a case to the White House that Arizona's population swells in the winter with snow birds.

Arizona has made it past early problems with vaccine distribution, which led to thousands of doses waiting in freezers, and the issue now is there aren't enough doses available to meet the demand, Kelly told reporters during a stop in the West Valley.

"We built the distribution system. Now we’ve got a supply problem," Kelly said. "What's probably coming next is we’re going to have a customer problem."

Surveys indicate that not enough people are interested in being vaccinated, Kelly said.

"So at some point down the road here we’ve got to look ahead to this. We’ve got to convince people to show up and get vaccinated and get their families vaccinated when it’s available to them," Kelly said.

MORE: How to sign up and schedule a COVID-19 vaccine appointment

Kelly spoke outside Luke Air Force Base, where he made his first visit as senator after taking a seat on the powerful Senate Armed Services Committee, which helps shape military budgets and policy. Kelly says the post will help him advocate for the military installations in Arizona, including Luke, Davis Monthan Air Force Base in Tucson, Fort Huachuca near Sierra Vista and Marine Corps Air Station Yuma.

His office announced shortly after he left Luke that Kelly will be chairman of the Armed Services Subcommittee on Emerging Threats and Capabilities, which focuses on intelligence, special operations and counterterrorism.

Luke is the military’s largest training base for the F-35, the newest generation fighter, and also trans pilots to fly the F-16, an older fighter. The base, home to 175 aircraft and about 7,000 personnel, is a major economic driver in the West Valley.

Commanders at Luke briefed Kelly on the capabilities of the F-35 and their response to COVID-19, which they said spiked on base at the same time it spiked in Maricopa County but did not disrupt training operations.

Kelly was told the presence of the F-35 has drawn above-average interest from foreign intelligence services and that it was hard to know when everyone on base would be vaccinated against COVID-19.

Later, he was shown the F-35 up close on the flight line before being ushered into a classified briefing. He also was allowed to fly a classified F-35 simulator.

The Department of Health Services on Wednesday reported 1,315 additional confirmed cases and 82 new deaths, increasing the state’s pandemic totals to 801,055 cases and 15,063 deaths.

Extreme winter weather in parts of the country are affecting Arizona's COVID-19 vaccination efforts, according to officials with AZDHS.

More people are about to get vaccinated against the coronavirus in Arizona as people 65 years and older can now get the vaccine and doses are being delivered to pharmacies, expanding accessibility.