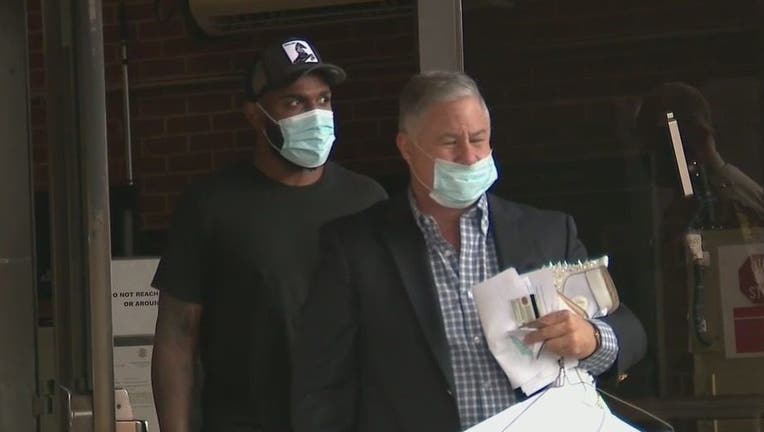 Atlanta Braves Outfielder Marcell Ozuna was released from the Fulton County jail on May 31, 2021.

ATLANTA - Atlanta Braves outfielder Marcell Ozuna was released from the Fulton County jail late Monday afternoon after being arrested over the weekend on domestic violence charges.

Ozuna, 30, was booked into the Fulton County Jail by Sandy Springs police on two charges for misdemeanor battery-family violence and felony aggravated assault-strangulation.

The Braves player made his first court appearance on those charges via video conference Monday morning.

"We come before the court, Mr. Ozuna and myself with certainly an understanding and appreciation for the gravity of the charges brought against him over the weekend.  I respectfully submit that there are other and additional facts which will come forward which will put this incident in a more proper prospective," Ozuna's attorney, Lars Anderson, told the judge during the hearing.

Due to the severity of the allegations, Fulton County Deputy District Attorney Simone Hylton asked the judge for no bond.

"The state is concerned that in this case, according to the warrant, the defendant did threaten to kill her, then proceeded to strangle her such that the strangulation did not stop until officers with the Sandy Springs Police Department entered into the home and intervened into this act," Hylton told the court.

But an attorney for Mrs. Ozuna said she wanted her husband released.

My client has expressed that she has no imminent fear of death or bodily harm. She is currently in Miami-Dade County in the State of Florida which is quite a little distance from the State of Georgia in this particular situation. She has expressed that she has no objection and would like the father of her children released on some type of bond," said Alejandro De Varona, attorney for Mrs. Ozuna.

Atlanta Braves star Marcell Ozuna was released from the Fulton County jail on Monday after being arrested on domestic-related charges by the Sandy Springs Police Department on Saturday.

Judge Ashkey Osby eventually sided with Ozuna, ordering a $20,000 bond. She stipulated that he is to have no contact with his wife, but can have contact with his children through a third party.

Ozuna's attorney described the couple's relationship as toxic at best and said they are in the process of getting a divorce. He also said there is more to the story.

"We understand the officers may have witnessed certain events at the end of this altercation, however, there were events that were proceeding it," said Anderson, who did not go into details.

Neither Ozuna nor his attorney cared to elaborate on that and offered no further comment as they made their way out of the Fulton County jail just after 5:30 p.m. Monday.

His next court appearance has not been scheduled.

Two attorneys for the Atlanta Braves were also in attendance for the virtual bond hearing on Monday. There is no word yet from the team what the charges may mean for Ozuna's future with the organization.

The Braves released a statement Saturday evening reading in part, "The Braves fully support Major League Baseball's policy on domestic violence which stresses to the fullest that our society cannot and will not tolerate domestic violence in any form."

Ozuna was arrested on Sunday after Sandy Springs police said they received a call around 12:26 p.m. about "an assault in progress" at a home located on Windsor Cove. Officers arrived at the home and heard "screaming coming from inside," police said.

According to police, the front door was open, and "officers entered the residence through the front door and witnessed the suspect grabbing the victim by the neck and throwing her against a wall."

Investigators said Ozuna's wife did suffer visible injuries, but she was not taken to the hospital.

This is not the first time the Ozuna family has undergone domestic issues. According to TMZ Sports, Ozuna's wife Genesis Ozuna was arrested on May 29, 2020, for allegedly throwing an object at Ozuna in Miami, Florida. Anderson mentioned her arrest in court on Monday.

"Mr. Ozuna and his wife are married and at best it is described as a toxic relationship. One year ago, almost to the day this weekend Mrs. Ozuna was arrested in Florida for hitting Mr. Ozuna with a soap dish causing a cut over his eye," Anderson said.

Ozuna did not travel with the Braves to New York for the team's series against the Mets due to broken fingers he suffered during a game in Boston on Tuesday. Ozuna was placed on the 10-day injured list on Saturday, retroactive to Wednesday, in response to the injury. Atlanta had not announced any more roster moves on Sunday morning. 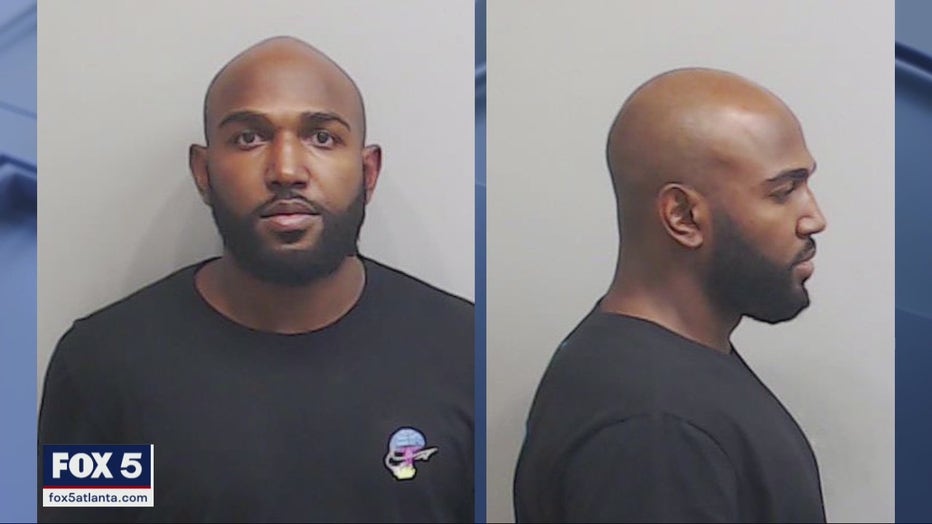 Ozuna re-signed with Atlanta in February on a $65 million, four-year deal after a stellar first season with the Braves in 2020.

He batted .338, led the National League with 18 homers and finished sixth in NL MVP balloting, becoming a fan favorite in the process with his colorful celebrations, including mimed selfies after home runs.