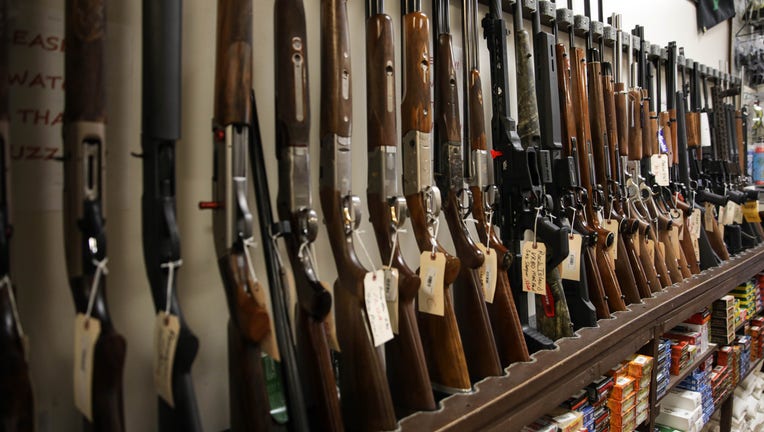 MANASSAS, USA - MARCH 17: Weapons on display at a gun shop in Manassas, Virginia, United States as gun and ammunition sales in the U.S. have skyrocketed as the coronavirus (COVID-19) pandemic spread across the country. Yasin Ozturk / Anadolu Agency

Historic numbers of background checks to purchase or possess a firearm were done in June, a trend in a year marked by uncertainty over the coronavirus pandemic, a subsequent economic recession, protests over racial injustice and calls to reduce police funding.

FBI numbers released Wednesday show that 3.9 million background checks were conducted last month, the most since the system was created in November 1998 to ensure felons and other prohibited people could not buy or possess a firearm. The previous monthly record came in March, when 3.7 million checks were done. Each week in June is now in the top 10 weeks for background checks.

Halfway through 2020, just over 19 million checks have been done, more than all of 2012 and each of the years before that.

Background checks are the key barometer of gun sales, but the FBI’s monthly figures also incorporate checks for permits that some states require to carry a firearm. Each background check also could be for the sale of more than one gun.

Firearm sales traditionally increase during presidential election years, fueled by fears among gun owners that the next president could restrict their rights. But this year has seen a series of previously unheard-of numbers as one crisis after another has emerged: the coronavirus, demonstrations over racial inequality and police brutality, as well as deep political divisions among Americans.

Adjusted to reflect only gun purchases, the number of checks for June was up nearly 136% over June 2019, according to the National Shooting Sports Foundation, which represents gunmakers. That adjusted figure was 2.2 million, the group said.

"Civil unrest, rioting, looting and calls to defund police are unquestionably motivating factors of why this trend is increasing. Americans are right to be concerned for their personal safety," said Mark Oliva, director of public affairs for the group.

Oliva said gun purchases are a reasonable reaction to the political climate.

"Politicians who entertain notions of defunding police departments are the same ones who call for strict gun control and even outright confiscation," he said. "These figures aren’t push polls. They are representative of Americans from all walks of life who are taking action and taking responsibility for their rights and their safety."

Gun control advocates worried that those buying a gun for personal safety may not have enough training to handle or store it correctly.

At the beginning of the pandemic, as states issued stay-at-home orders and worries emerged about economic turmoil, long lines snaked outside of some gun shops and people emptied shelves of ammunition. Protests that began in late May, with some calling for defunding law enforcement, stirred some people’s worries about defending themselves if police are unable to respond to calls.

An estimated 40% of those purchasing firearms are first-time buyers, the National Shooting Sports Foundation said.

"I’m extremely concerned about those people who, in this time of uncertainty and fear, have been sold on the gun industry narrative that in uncertain times, when you’re feeling out of control, your possession of a firearm will satisfy that fear," said David Chipman, senior policy director for the Giffords gun control group.

Chipman, a retired agent with the federal Bureau of Alcohol, Tobacco, Firearms and Explosives, said the numbers are not mere blips.

"This can no longer be characterized as a spike. This is a sustained uptick in sales that has continued for an unprecedented amount of months now," he said.