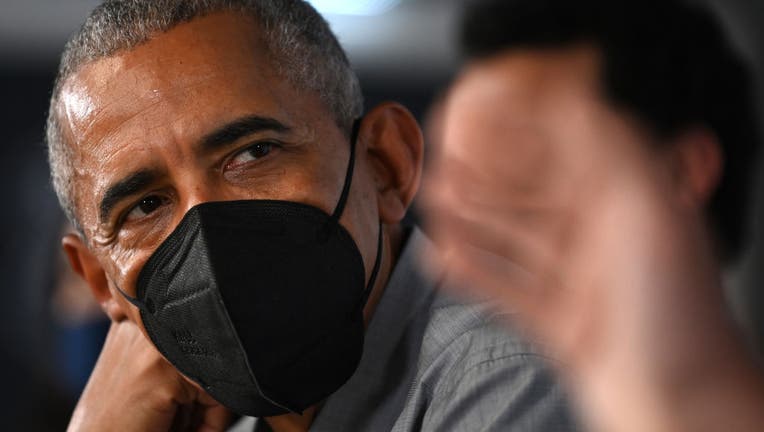 Former US President Barack Obama attends a round table meeting at the University of Strathclyde on November 8, 2021 in Glasgow, Scotland. (Photo by Jeff J Mitchell/Getty Images)

"I just tested positive for COVID. I’ve had a scratchy throat for a couple days, but am feeling fine otherwise," the 44th president of the United States wrote on Twitter.

Obama said his positive test came despite being vaccinated and boosted. He said his wife, Michele Obama, tested negative.

"It’s a reminder to get vaccinated if you haven’t already, even as cases go down," he said.

Obama encouraged more Americans to get vaccinated against the coronavirus, despite the declining infection rate in the U.S. There were roughly 35,000 infections on average over the past week, down sharply from mid-January when that average was closer to 800,000.

The Centers for Disease Control and Prevention report that 75.2% of U.S. adults are fully vaccinated and 47.7% of the fully vaccinated have received a booster shot. The CDC relaxed its guidelines for indoor masking in late February, taking a more holistic approach that meant the vast majority of Americans live in areas without the recommendation for indoor masking in public.

Daily case rates have plummeted in the U.S. since omicron hit earlier this winter.

There were roughly 35,000 infections on average over the past week, down sharply from mid-January when that average was closer to 800,000.

Hospitalizations of people with COVID-19 have plummeted 80% in the last six weeks across the U.S. since a mid-January pandemic peak, dropping to the lowest levels since July 2021, according to data from the Centers for Disease Control and Prevention. Case counts have followed the same trend line to the lowest counts since last summer as well. Even the death tally, which typically lags behind cases and hospitalizations, has slowed significantly in the last month.

In its latest pandemic report, the WHO said infections and deaths are down across the globe, with only one region — the Western Pacific — seeing a rise in cases. The Middle East and Africa saw cases drop by 46% and 40%, respectively.

Another positive: The omicron wave and vaccinations have left enough people with protection against the coronavirus that future spikes will likely require much less disruption to society, experts say.

RELATED: US to ease nationwide mask mandate on planes, buses next month