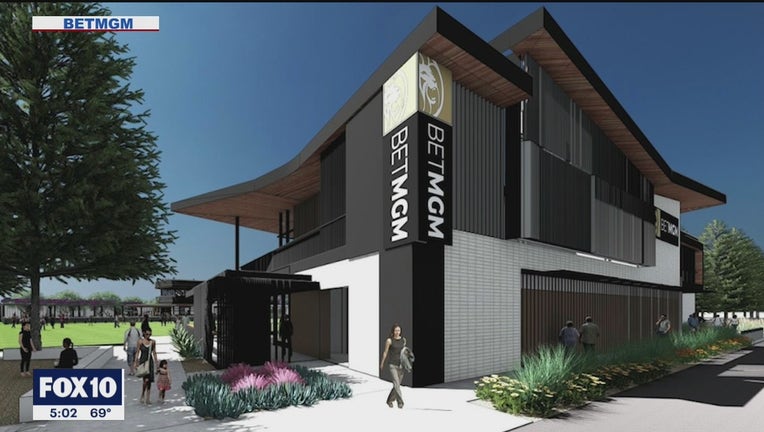 Rendering of a BetMGM sportsbook near State Farm Stadium in Glendale.

GLENDALE, Ariz. - In the next NFL season, fans of the Arizona Cardinals will be able to cheer the team on at their brand-new sportsbook at State Farm Stadium in Glendale.

The Cardinals teamed up with betting operator BetMGM in building a new sportsbook next to the great lawn. Construction on the two-story, nearly 17,000 square feet facility has already begun, and the Cardinals will become the first NFL team to have on-site sports betting.

The facility will house a 265-square foot video wall, more than 25 self-service betting kiosks, teller windows and a sports bar.

"It encompasses the game with the fans at a whole new level, and for me, that's the exciting part," said Vasquez.

Now, every professional venue in Arizona will have a sportsbook: FanDuel opened one at footprint center, Caesars has one at Chase Field, and there will be sportsbooks at TPC Scottsdale, as well as Phoenix Raceway. All of this came after sports betting was officially launched in Arizona in 2021.

"We will also be the first super bowl site to have an operational retail sports booking during a Super Bowl event, which will be huge, so many people will be flocking to Arizona, a huge tourist attraction," said Pierre.