A mass shooting at a Valley Transportation Authority light rail yard in San Jose on Wednesday morning during a meeting left multiple people injured and 10 people dead - including the shooter, according to authorities and sources. The shooter was employed as a VTA rail technician, according to the Santa Clara County Sheriff's Office. The attacker was identified as 57-year-old Sam Cassidy, according to two law enforcement officials. Investigators offered no immediate word on a possible motive.

WASHINGTON - Following the tragic mass shooting at a San Jose rail yard, President Joe Biden remarked on the "horrific tragedy" that left nine people dead, including the gunman, on Wednesday.

"There are at least eight families who will never be whole again. There are children, parents, and spouses who are waiting to hear whether someone they love is ever going to come home. There are union brothers and sisters – good, honest, hardworking people – who are mourning their own," according to a White House statement.

Biden said he had the "solemn duty" of having to order flags to be flown at half-staff once again to honor the lives of the victims lost in the mass shooting.

The order follows a slew of mass shootings which include the Atlanta spa shooting, the grocery store shooting in Colorado, the shooting in Rock Hill, South Carolina and the FedEx facility shooting in Indianapolis, Indiana. 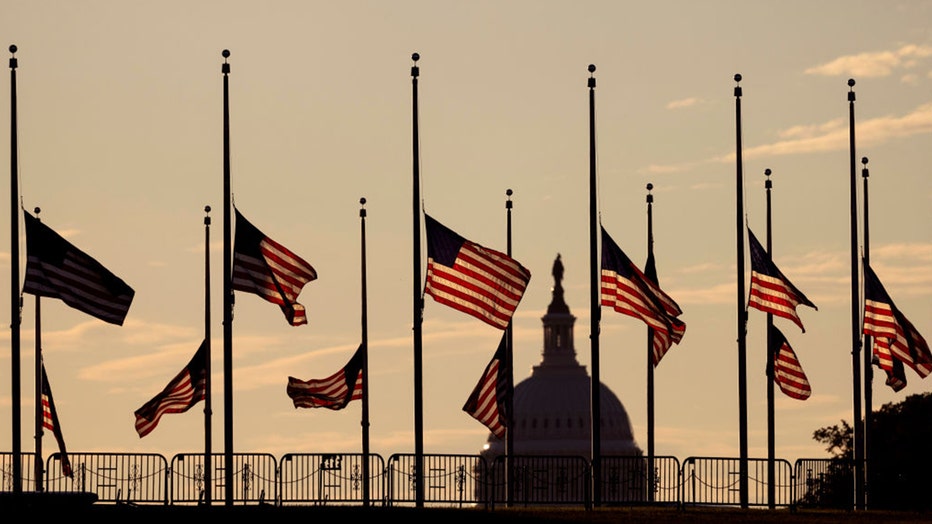 FILE - American flags are flown at half-staff in response to the San Jose mass shooting, at the base of the Washington Monument on the National Mall on May 27, 2021 in Washington, DC.

"Every life that is taken by a bullet pierces the soul of our nation. We can, and we must, do more," Biden said.

The president also urged Congress to fast-track policies "to help end this epidemic of gun violence in America."

The bloodshed comes amid a rise in mass killings after the COVID-19 pandemic had closed many public places and kept people confined to their homes last year.

A database compiled by The Associated Press, USA Today and Northeastern University that tracks every mass killing over the last 15 years shows that the San Jose attack is the 15th mass killing so far in 2021 - all of them shootings.

RELATED: Widow of slain VTA employee says her husband and 'rock' died in her arms

Eighty-six people have died in the shootings, compared with 106 for all of 2020. The database defines mass killings as four or more people dead, not including the shooter, meaning the overall toll of gun violence is much higher when adding in smaller incidents.

"Enough. Once again, I urge Congress to take immediate action and heed the call of the American people, including the vast majority of gun owners, to help end this epidemic of gun violence in America," Biden said.

Authorities identified the gunman in Wednesday’s San Jose mass shooting as 57-year-old Samuel Cassidy who was also an employee at the light rail yard.

"It appears to us at this point that he said to one of the people there: ‘I’m not going to shoot you,’" Smith said. "And then he shot other people. So I imagine there was some kind of thought on who he wanted to shoot."

RELATED: Why did the gunman kill 9 co-workers at the San Jose VTA light rail yard before killing himself?

Their jobs included bus and light rail operators, mechanics, linemen and assistant superintendent. One had worked for the transit authority since 1999.

Singh had worked as a light rail train driver for eight or nine years and had a wife, two small children and many family members, said his cousin, Bagga Singh.

Wednesday's attack was Santa Clara County's second mass shooting in less than two years. A gunman killed three people and then himself at a popular garlic festival in Gilroy in July 2019.