The president joined Florida's governor to look at damage from Hurricane Ian in the Fort Myers area, and to thank first responders.

President Joe Biden surveyed the devastation of hurricane-ravaged Florida on Wednesday, promising to marshal the power of the federal government to help rebuild as he comforted local residents alongside Republican Gov. Ron DeSantis, a potential 2024 foe.

Biden praised DeSantis' handling of the storm recovery as both men — who have battled over pandemic protocols and migration as the governor mulls a presidential bid — put aside politics for a few days. The state is struggling to recover from the wreckage of Hurricane Ian, which tore through southwestern Florida last week and left dozens dead.

"Today we have one job and only one job, and that’s to make sure the people in Florida get everything they need to fully, thoroughly recover," Biden said in a community that bore the brunt of Ian's assault. He warned that the rebuilding effort will take months or years. 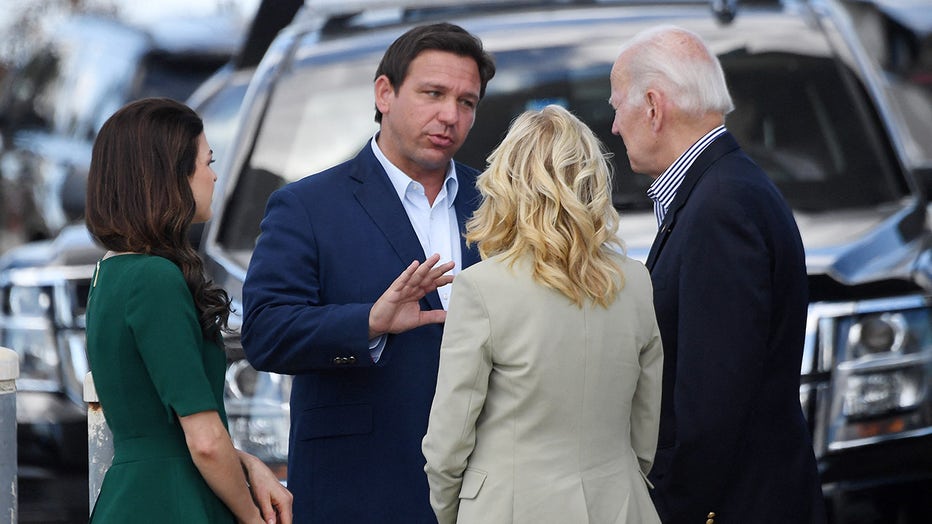 "It’s going to take a hell of a long time, hopefully without any snags in the way," he said as DeSantis stood behind him, hands folded as he squinted into the glaring sunlight. "Later, after the television cameras have moved on, we’re still going to be here with you." 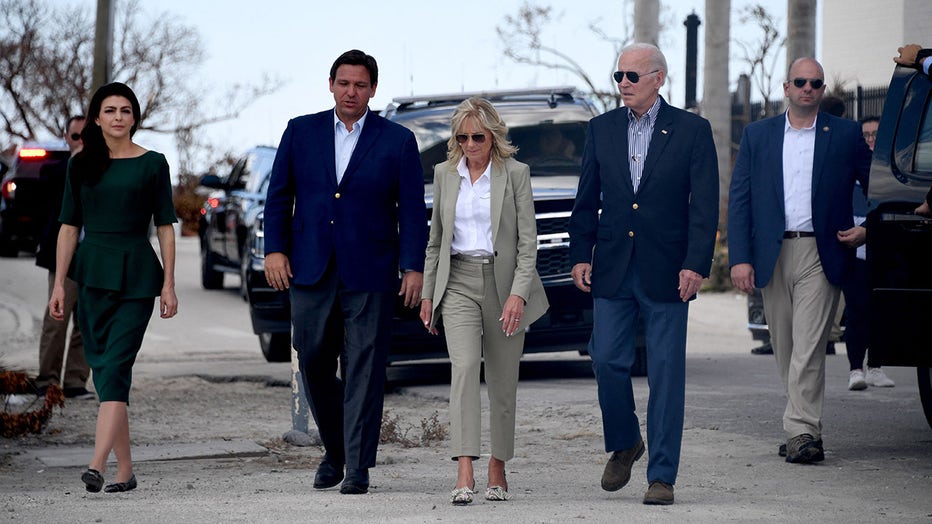 The days after Ian's landfall in Florida have prompted a temporary détente between Biden and DeSantis, who had spoken on the phone at least three times to coordinate recovery efforts. They spent part of Wednesday meeting with area residents and, for Biden, absorbing the full scope of Ian's devastation.

After Biden and first lady Jill Biden arrived earlier at Fisherman's Wharf — where homes and businesses lay in ruins amid debris and muck — DeSantis offered his hand to the president for a shake. Next to them as they spoke was a boat that the storm had lifted into a cafe

The solidarity, however fleeting, continued Wednesday afternoon when DeSantis formally welcomed Biden to his state and praised the collaboration with officials on the ground and the federal government in Washington.

"We are cutting through the red tape and that’s from local government, state government, all the way up to the president. We appreciate the team effort," DeSantis said.

Biden said DeSantis had done a "good job" when asked by reporters to assess the governor's handling of the recovery efforts.

"We have very different political philosophies ... but we worked hand in glove," Biden said. "On things related to dealing with this crisis, we’ve been completely lockstep. There’s been no difference."

The breadth of the devastation that Biden witnessed was immense. The presidential motorcade drove by wind-shorn trees, some uprooted, others with branches pulled backwards by the storm. Fields off the highway were still flooded, forming stagnant lagoons.

Signs for stores and restaurants were blown out; ruined mattresses were piled in neighborhood streets, a building was tipped to the side like a chess piece. An armada of workers and repair trucks struggled with recovery. 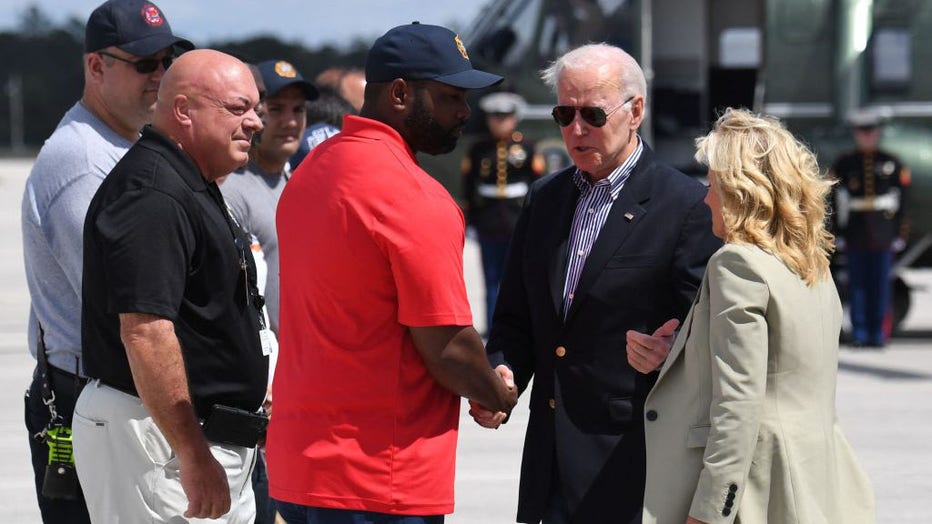 US President Joe Biden and US First Lady Jill Biden are greeted by US Representative Byron Donalds (R-FL) upon arrival at Southwest Florida International Airport in Fort Myers, Florida, on Oct. 5, 2022. (Photo by OLIVIER DOULIERY/AFP via Getty Images

Hurricane Ian has resulted in at least 98 people confirmed dead, including 89 in Florida, and many people still wait for power to be restored. Ian’s 150 mph winds and punishing storm surge last week took out power for 2.6 million in Florida. Many people still are unable to get food and water, although DeSantis said power has been restored to more than 97% of the state.

With the midterm elections just a month away, the crisis was bringing together political rivals in common cause at least for a time.

Biden and DeSantis have had a multitude of differences in recent years over how to fight COVID-19, immigration policy and more. In recent weeks, they tussled over the governor’s decision to put migrants on planes or buses to Democratic strongholds, a practice that Biden has called "reckless."

RELATED: Gov. DeSantis has warning for looters in Florida after Ian: 'We are a second amendment state'

Along with DeSantis, Sen. Rick Scott has also been one of Biden's most prominent Republican critics. He, Republican Sen. Marco Rubio and other state and local officials joined the president and governor. Rubio, like DeSantis, is up for reelection in November.

Jeff Rioux, a general contractor in Fort Myers and a registered Republican, said as he mopped up floors and tore out soaked drywall from his flooded house that he welcomed Biden’s visit. 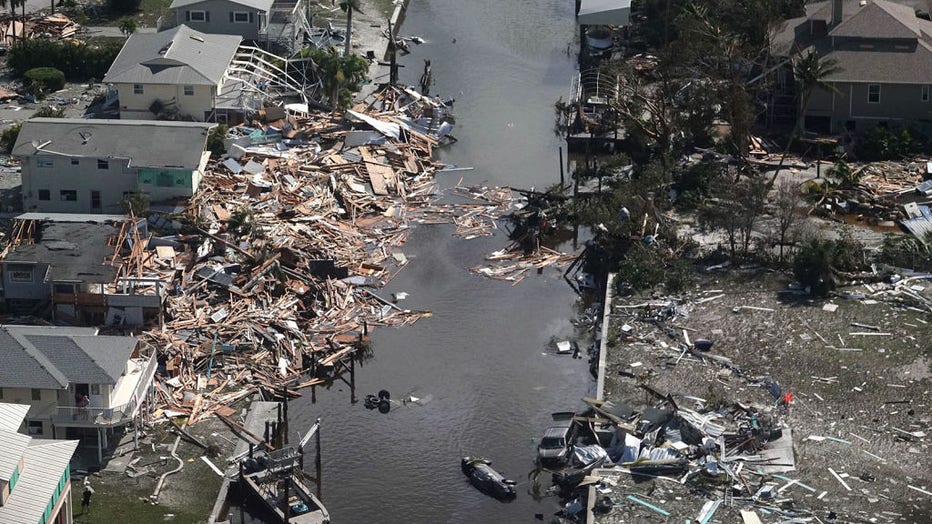 Aerial photo of damage in the aftermath of Hurricane Ian on Sept. 29, 2022, in Fort Myers. (Joe Cavaretta/Sun Sentinel/Tribune News Service via Getty Images)

"The world does need to see what happened here. It’s going get some help down here," Rioux said of the national attention. "At some point you’ve got to put politics aside. People are hurting down here. It’s not right or left, it’s America at the end of the day."

Biden resorted to profanity at one point, but only in an apparently jocular comment picked up by a microphone and causing much comment on social media.

As Fort Myers Beach Mayor Ray Murphy thanked Biden for coming, the president said at one point in the brief conversation, "No one f—— with a Biden," and appeared to offer the mayor some advice.

President Joe Biden spoke to residents of Puerto Rico as they clean up damage from Hurricane Fiona hitting the U.S. territory last month.

Before the storm hit, the president had intended to visit the Florida cities of Orlando and Fort Lauderdale to stress his efforts to strengthen Social Security and Medicaid. Biden has accused Scott of wanting to end both programs by proposing that federal laws should expire every five years, although the Florida senator has said he wants to preserve the programs.

The hurricane changed the purpose and tone of Biden's first trip to Florida this year, which was in an area devastated by winds and surging water. Boats, including huge yachts, were capsized and hurled inland.

RELATED: What to expect when processing insurance claims after a hurricane or flood

FEMA Administrator Deanne Criswell told reporters on Air Force One that the cost of rebuilding will be significant: "It will certainly be in the billions and perhaps one of the more costly disasters that we’ve seen in many years."

The White House message of bipartisan unity in a time of crisis marked a difference from Biden's predecessor, Donald Trump, who at times threatened to withhold aid from the states of Democrats who criticized him, including Govs. Gavin Newsom of California and Andrew Cuomo of New York.