WASHINGTON (AP) -  Democrats' vast social and environment package was stuck in the Senate Thursday as leaders' hopes for an accord with holdout Sen. Joe Manchin and approval of their flagship domestic measure in the year's waning days seemed all but dead.

After a closed-door lunch among Senate Democrats, Sen. Ben Cardin, D-Md., told reporters that a statement by President Joe Biden was expected shortly giving an update on "his conversations with Sen. Manchin and others."

Talks on the 10-year, roughly $2 trillion bill between Biden and Manchin, who wants to cut and reshape the measure, are said to have yielded little progress. Majority Leader Chuck Schumer, D-N.Y., had set Senate passage before Christmas as his goal, but disputes with Manchin and other Democrats remain and it's become unclear how they would move forward without decisive intervention by Biden.

Schumer barely mentioned the legislation as the day's business began. Instead, he described Democrats' efforts to break a logjam on voting rights legislation and a pile of nominations the Senate will consider "as we continue working to bring the Senate to a position where we can move forward" on the social and environment bill.

No. 2 Senate Democrat Richard Durbin of Illinois joked to reporters that Manchin "has been camped out in the Lincoln Bedroom and has his own parking space at the White House, he's been there so often" and said he "couldn’t ask for Joe Biden to do more" to try reaching agreement with Manchin.

Using his sway in a 50-50 Senate where Democrats need unanimity to prevail, Manchin has continued his drive to force his party to cut the bill's cost and eliminate programs he opposes. All Republicans oppose the package, which carries many of Biden’s paramount domestic priorities.

The rocky status of the Biden-Manchin talks was described Wednesday by a person who spoke only on condition of anonymity. The person said Manchin was pushing to eliminate the bill's renewal of expanded benefits under the child tax credit, a keystone of Democratic efforts to reduce child poverty.

Adding further doubt about quick Senate action this year, Biden suggested that Democrats should instead prioritize voting rights legislation, a primary party goal that Republicans have long stymied. Democrats face an uphill fight on the voting measure, but focusing on it would let them wage a battle that energizes the party's voters while lawmakers work behind the scenes on the social and environment bill. 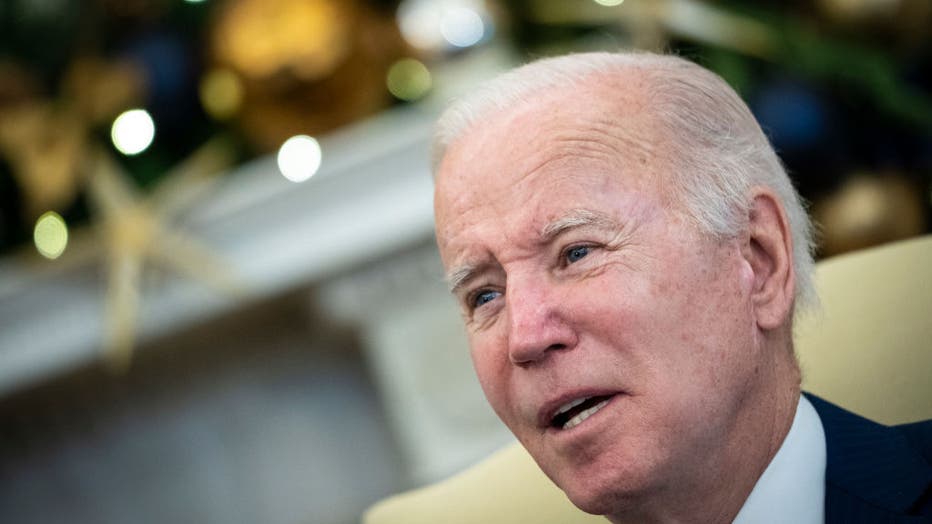 WASHINGTON, DC - DECEMBER 13: U.S. President Joe Biden speaks during a briefing about the recent tornadoes in the Midwest in the Oval Office of the White House December 13, 2021 in Washington, DC. More than 60 people were killed, and officials fear t

Asked whether Congress should quickly consider the voting legislation and delay the $2 trillion bill to next year, Biden told reporters, "If we can get the congressional voting rights done, we should do it." He added, "There's nothing domestically more important than voting rights." Biden spoke as he toured tornado damage in Dawson Springs, Kentucky.

All of that produced a day of confusion in the Senate, where rank-and-file lawmakers and aides said they knew nothing about what legislation the chamber would tackle next, when and whether they would prevail.

Letting the social and environment legislation slip into next year, when congressional elections will be held, would be ominous for the bill's ultimate prospects.

With Democrats having blown past previous self-imposed deadlines on the push, another delay would fuel Republican accusations that they are incompetently running a government they control. Democrats are bracing for November elections when the GOP has a real chance of winning control of the House and Senate.

Word of Manchin's stance prompted a backlash from colleagues, whom he's frustrated for months with constant demands to cut the bill's size and scope. The measure also has money for health care, universal prekindergarten and climate change programs, largely paid for with tax boosts on big corporations and the rich.

Durbin said "the level of emotion" among Democrats over the child tax credit "is very high," and said he was "stunned" when he heard about Manchin's demands.

Manchin has wanted the overall bill's 10-year price tag to fall below $2 trillion. He also wants all its programs to last the full decade.

The current bill would extend the enhanced child tax credit for just one year, a device to contain the bill's cost. Renewing the improved benefits for 10 years would increase its current one-year cost of around $100 billion to over $1 trillion, and doing that while cutting the overall bill's size would wreak havoc on Democrats' other priorities in the bill.

The Treasury Department says the expanded tax credit has helped the families of 61 million children.

Another impediment to Democrats is a time-consuming review by the Senate parliamentarian, Elizabeth MacDonough, about whether many of the bill's provisions violate the chamber's rules and should be dropped. Her written opinions on that, including on provisions letting many migrants remain temporarily in the U.S., may not be ready until the weekend or later.

Manchin's other demands have included removing a new requirement for paid family leave. Disputes among other lawmakers include how to increase federal tax deductions for state and local taxes.

The House approved its version of the legislation in November.