WASHINGTON - President Joe Biden is looking to close his two-day virtual Summit for Democracy on Friday by shining a spotlight on the importance of election integrity, countering authoritarian regimes' misuse of technology and bolstering independent media.

The United States, along with Australia, Denmark and Norway, announced the launch of a joint effort that aims to stem the misuse of technology by authoritarian powers to stifle dissent and seeks to help develop new tech innovations that support human rights.

"The United States will take greater responsibility for the digital tools we export," USAID administrator Samantha Power said. "All too often, technology originates in a hub of innovation like the United States and is exported to countries that use that technology to enable human rights abuses."

Biden on Thursday pledged that the U.S. would spend up to $424 million around the world to support independent media, anti-corruption work and more.

President Joe Biden delivered opening remarks on Dec. 9, 2021, for the White House Summit for Democracy, a two-day virtual meeting of some 110 nations.

The administration has sought to frame the virtual summit — a gathering that Biden had made a priority during his first year in office — as a launching point for the 110 nations invited to take part in it to collaborate at difficult moment for democracies. Biden wants to reconvene a follow-up gathering next year to take stock.

Biden in his own assessment said democracies are in a difficult place and called on world leaders to work with him to reverse what he called an alarming "backward slide" of democracy around the globe.

He didn’t mention China or Russia by name as he opened the summit. But he has repeatedly made a case that the U.S. and like-minded allies need to show the world that democracies are a far better vehicle for societies than autocracies are. It is a central tenet of his foreign policy outlook — one that he vowed would be more outward-looking than his predecessor Donald Trump’s "America First" approach.

Biden underscored that even long-established democracies, like the United States, haven't been immune to the strains.

"Here in the United States we know as well as anyone that renewing our democracy and strengthening our democratic institutions requires constant effort," Biden said. 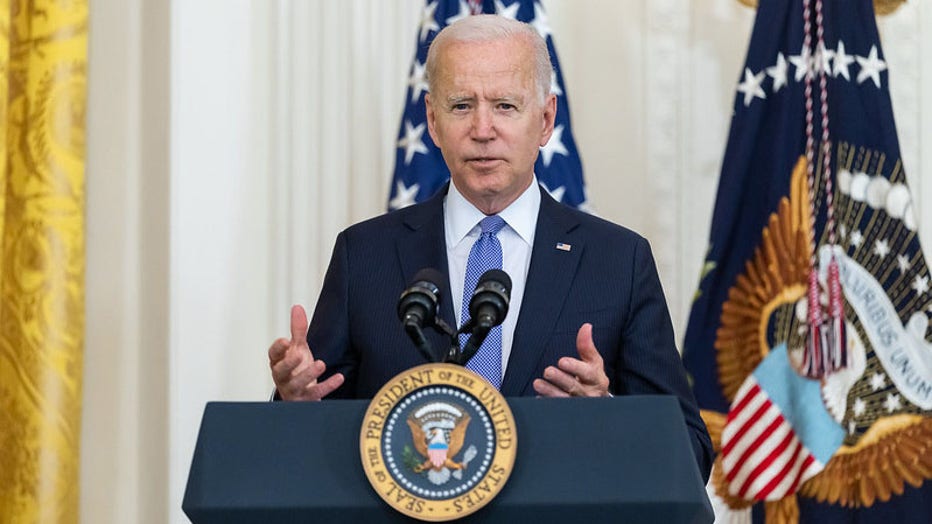 FILE - President Joe Biden delivers remarks on the Victims of Crime Act Fix to Sustain the Crime Victims Fund on July 22, 2021, in the East Room of the White House. (Official White House Photo by Adam Schultz)

The gathering has drawn backlash from the United States’ chief adversaries and other nations that were not invited.

The ambassadors to the U.S. from China and Russia, two countries that did not receive invitations, wrote a joint essay describing the Biden administration as exhibiting a "Cold-War mentality" that will "stoke up ideological confrontation and a rift in the world." The administration also faced scrutiny over how it went about deciding which countries to invite.

Other leaders at the summit delivered their own remarks, many prerecorded, on the state of democracy, often reflecting on the stress that rapidly evolving technology is having on their nations. They also bemoaned the increase of disinformation campaigns aimed at undermining institutions and elections.

"The democratic conversation is changing," Denmark's Prime Minister Mette Frederiksen said. "New technologies and large tech companies are increasingly setting the stage for the democratic dialogue, sometimes with more emphasis on reach than on freedom of speech."

The summit comes as Biden is pressing Russia's Vladimir Putin to step back after a massive buildup of troops on the Ukraine border that has created growing concern in Washington and European capitals as well as Ukraine.

Biden earlier this week said that he warned Putin of "severe consequences" if Russia invaded.

RELATED: Biden-Putin call: US to warn Russia of economic pain if it invades Ukraine