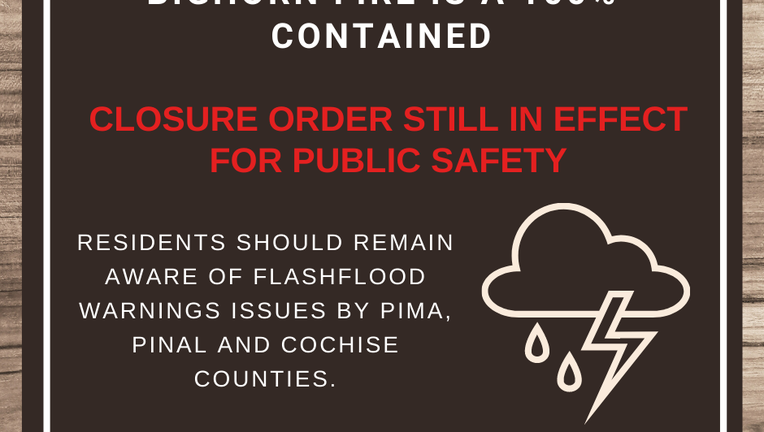 While the fire is a contained, a closure order remains in effect for public safety as the Bighorn Fire increased the possibility of flooding downstream and of sediment and debris runoff. (Coronado National Forest)

However, Coronado National Forest officials said several popular outdoor recreation areas will remain closed until Nov. 1 because of potential for causing flooding from monsoon rains and other hazards.

“Significant weather in the area can result in floods downstream and debris runoff,” Forest Supervisor Kerwin Dewberry said in a statement. “We urge the public to adhere to the closure order and avoid visiting the burned area for their own safety.”

The Bighorn Fire started June 5 in and near the Santa Catalina Mountains.

Areas remaining closed include the Sabino Canyon Recreation Area in the south side of the mountains, cabins on national forest land and all major hiking trails.

Catalina State Park remains closed due to the fire, but is outside the national forest so it can reopen when state officials choose to do that.

Crews are finally getting a handle on the Bighorn Fire burning in southern Phoenix near Mount Lemmon near Tucson. Some communities were allowed back to their homes after several evictions.

Timeline of the fire

The Bighorn Fire covered 119,020 acres with 78% containment.  Many neighborhoods were evacuated, but some are able to begin returning June 7. Instructions to follow when returning were provided to full-time residents and community members of Summerhaven and Willow Canyon.

Officials said the fire had reached the north side of Mount Lemmon and also was to expected to push through a gap several miles to the north. Crews were conducting burnouts to deprive the fire of fuel and improving containment lines in several areas to protect Mount Lemmon and the communities of Oracle and San Manuel. Catalina Highway at milepost 0 was closed and open to only home and business owners. The communities of Oracle and parts of east Golder Ranch were placed on "Set" status, meaning residents there should get ready to evacuate. The surrounding area south of East Hawser St. and east of North Lago del Oro Parkway, including Catalina Regional Park were under a "SET - Be Alert” notice.

Operations focused near the community of Golder Ranch, where fire activity had picked up due to extremely hot and dry conditions.

“The fire activity near the homes has dropped down due to the good work of our firefighters,” said Adam Jarrold, public information officer for the fire management team.

Authorities said the Bighorn fire’s growth had slowed, but it remained a threat. Flames have been visible from Tucson at night, and smoke from the fire plumed over a suburb. Later in the day, an air tanker was seen spreading red fire retardant over the flames.

“We do have some weather concerns,” said incident meteorologist Gary Zell, who was stationed at now-closed Catalina State Park.

“These guys are heroes, working all day in up to 107 degrees (41.6 Celsius),” said Zell, who has worked wildfires around the West for two decades. “This is the first time I’ve worked a fire in my hometown so I’m pretty vested in making sure everything goes well.” 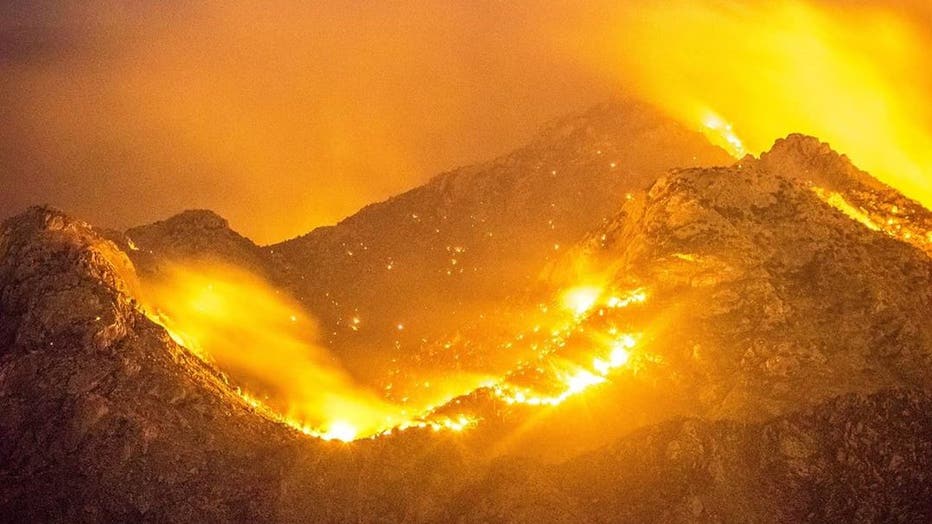 Over 400 firefighters aided by aircraft dropping water and retardant battled the lightning-sparked fire that as of Friday had burned mostly brush and tall grass.

Sheriff’s officials went door to door in neighborhoods to notify residences of the evacuation notice, which a sheriff’s spokesman said wasn’t mandatory.

“People are not required to leave, however, we are telling people we may not be able to come back and assist if things start to burn,” said Deputy James Allerton.

No injuries or structural damage was reported, Allerton said.

”It’s not a great place for us to put people in to safely work,” he said. "It’s just too steep."

Mayberry said crews continued to clear lines to keep the fire away from homes south of the forest and might set additional fires to burn vegetation to slow the wildfire by depriving it of potential fuel.

Hundreds of foothills homes on the outskirts of Tucson remained under an evacuation notice Friday as firefighters worked to keep a wildfire from moving downhill from canyons and ridges in mountains in a national forest. Cindy Wolfe with the Type II Southwest Management team provides an update.

The fire was reportedly sparked on June 5 by lightning.

Most of the western United States is experiencing extreme dryness or drought, creating challenging conditions for wildfire season, Bryan Henry, a meteorologist with the National Interagency Fire Center, said in a recent fire season outlook.

Authorities have said southern Arizona’s dry, hot weather and the steep, rocky topography have been the main challenges in fighting the fire.

The Santa Catalina Mountains, or the Catalinas, is just north of Tucson and is the most widely-known mountain range in the area.