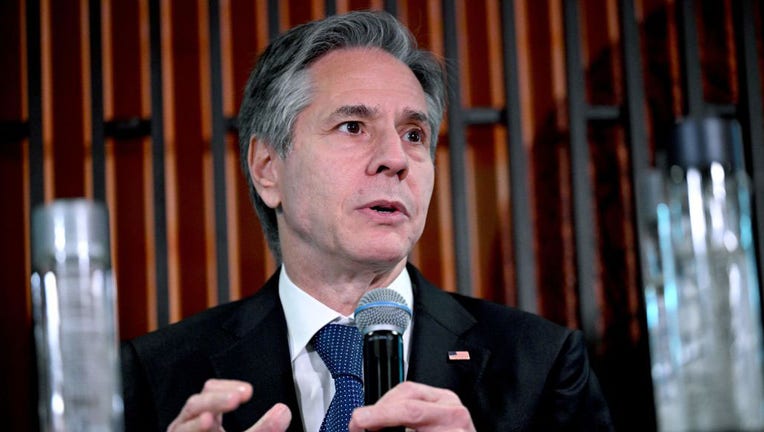 FILE - US Secretary of State Antony Blinken speaks during an event with African diaspora youth and Bureau of Educational and Cultural Affairs Exchange alumni at a restaurant in Washington, DC, on Aug. 15, 2022. (Photo by MANDEL NGAN/POOL/AFP via Gett

KYIV, Ukraine - U.S. Secretary of State Antony Blinken made an unscheduled visit to Kyiv on Thursday as the Biden administration announced major new military aid worth more than $2 billion for Ukraine and other European countries threatened by Russia.

In meetings with senior Ukrainian officials, Blinken said the Biden administration had notified Congress of its intent to provide $2 billion in long-term Foreign Military Financing to Ukraine and 18 of its neighbors, including NATO members and regional security partners, that are "most potentially at risk for future Russian aggression."

It will go to help those countries "deter and defend against emergent threats to their sovereignty and territorial integrity" by enhancing their military integration with NATO and countering "Russian influence and aggression," the department said.

"This assistance demonstrates yet again our unwavering commitment to Ukraine’s future as a democratic, sovereign, and independent state, as well as the security of allies and partners across the region," it said.

The route for International Atomic Energy Agency (IAEA) inspectors heading to a nuclear power plant in southern Ukraine was shelled by Russian forces just after the team’s departure for the site, the governor of Zaporizhzhia said on Sept. 1. (Credit: Maria Avdeeva via Storyful)

The financing comes on top of a $675 million package of heavy weaponry, ammunition and armored vehicles for Ukraine alone that Defense Secretary Lloyd Austin announced earlier Thursday at a conference in Ramstein, Germany.

Austin said that "the war is at another key moment," with Ukrainian forces beginning their counteroffensive in the south of the country. He said that "now we’re seeing the demonstrable success of our common efforts on the battlefield."

"The face of the war is changing and so is the mission of this contact group," Austin told the meeting of the Ukraine Defense Contact Group, which was attended by NATO Secretary-General Jens Stoltenberg and Ukraine’s defense minister as well as officials from allied countries.

Thursday's contributions bring total U.S. aid to Ukraine to $15.2 billion since Biden took office. U.S. officials said the new commitments were intended to show that American support for the country in the face of Russia's invasion is unwavering.

The announcements came as fighting between Ukraine and Russia has intensified in recent days, with Ukrainian forces mounting a counteroffensive to retake Russian-held areas in the south and east.

Shelling has continued near Ukraine’s Zaporizhzhia nuclear power plant, Europe's largest, with the warring sides trading blame again amid dire warnings from the U.N. atomic watchdog for the creation of a safe zone to prevent a catastrophe.

On Wednesday, the U.S. accused Moscow of interrogating, detaining and forcibly deporting hundreds of thousands of Ukrainians to Russia. Russian officials immediately rejected the claim as "fantasy."